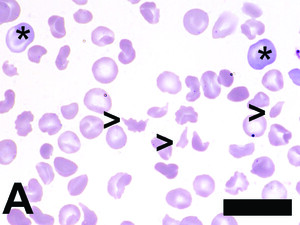 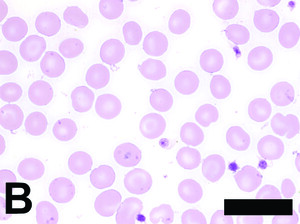 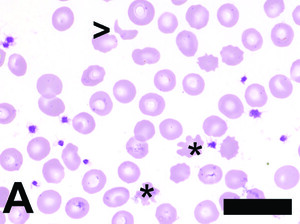 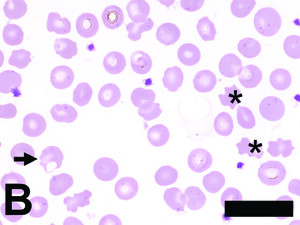 Intravascular hemolysis (IH) has been identified in human patients with moderate to severe aortic stenosis (AS).1,2,3,4,5 In these patients, IH was accompanied by poikilocytes (ie, abnormally shaped erythrocytes) and more precisely RBC fragments (ie, schistocytes).1,2 The underlying mechanism of RBC fragmentation involves shear stress exerted on erythrocytes by high-velocity flows through stenotic orifices.5 In human patients, IH is also a well-described complication of cardiac valve prostheses and vascular devices.6,7,8,9,10,11,12,13,14,15,16,17,18,19,20 In veterinary medicine, IH has been identified as secondary to transarterial coil embolization for ventricular septal defects (VSDs)21 and patent ductus arteriosus occlusions in dogs.22,23,24,25In those cases, IH is often not clinically significant and is likely related to the presence and severity of residual interventricular and ductal flows, respectively.24 Such mechanical hemolysis can resolve spontaneously or when occlusion becomes complete; for example, after a second successful percutaneous procedure.15,24,26 To the best of our knowledge, no data about flow-induced damage to RBCs associated with congenital ventricular outflow tract obstruction (VOTO) in dogs are currently available.

The objectives of this prospective observational study were therefore to document erythrocyte fragmentation injury in dogs with congenital VOTO (ie, pulmonic stenosis [PS] and AS) and determine whether these hematologic abnormalities were associated with peak systolic Doppler-derived trans-stenotic pressure gradients (∆P), as well as features of the stenotic lesions (number and location).

The study sample consisted of client-owned dogs diagnosed with congenital VOTO (PS or AS), based on conventional echocardiographic and Doppler examination, that were prospectively recruited at the Alfort Cardiology Unit (National Veterinary School of Alfort, France) between April 2017 and January 2020. Blood samples for CBC analysis are routinely collected in our unit for dogs with PS and AS at the time of diagnosis or for follow-up purposes. These blood samples were used for the present study, with specific additional hematologic analyses after the owners had given informed consent on this additional free-of-charge blood analysis.

All dogs underwent a complete physical examination as well as conventional echocardiographic (ie, M-mode and 2-D) and standard Doppler examinations with, if possible, 3-D echocardiography. Collected data included signalment (breed, age, sex, and body weight), clinical status, echocardiographic and Doppler findings, and treatment at the time of diagnosis. Dogs with concomitant hemodynamically significant congenital heart diseases were excluded from the study as were dogs with clinical signs suggesting a concomitant systemic or organ-related disease that could result in hematologic alterations.

A population of apparently healthy dogs (control group) was also included during the same period. These dogs were student-owned dogs, free from medication, with unremarkable medical history, no known illness, and normal physical examination findings. Blood was collected upon approval from the dog owners.

Standard transthoracic M-mode, 2-D, and Doppler examinations were performed by trained observers on awake, standing dogs by use of ultrasound units (Vivid 7 and Vivid E9; GE Healthcare) as previously described and validated.27 All images were reviewed by a diplomate of the European College of Veterinary Internal Medicine in cardiology (VC).

Pulmonic stenosis—Obstructive abnormalities of the right ventricle outflow tract, pulmonic valve, and pulmonic trunk were diagnosed by use of the right and left parasternal short-axis views at the level of the aortic valve.28,29 The location (valvular, subvalvular, and/or supravalvular obstructions) and number of stenotic lesions were assessed from the same views by use of 2-D, 3-D (if possible), and color-flow Doppler modes.

Blood samples for this study were gathered in the context of routine clinical assessment. Blood was collected and placed into a plastic tube containing K3EDTA. All samples were entirely processed within 2 hours. A CBC was performed with a hematology analyzer (Sysmex XT 2000i; Kobe) at the BioPôle Laboratory, National Veterinary School of Alfort, France. The tested variables included hemoglobin concentration, hematocrit, and RBC count.

Additionally, for each dog, a blood smear was stained with May-Grünwald-Giemsa stain and reviewed by a diplomate of the American College of Veterinary Pathologists (PD) who was blind to the animal status and ∆P values, and who recorded the number of schistocytes, acanthocytes, and keratocytes among 1,000 erythrocytes using an image processing program (ImageJ version 1.52; NIH). An acanthocyte was considered as an abnormally shaped erythrocyte with between 2 to 20 unevenly distributed thorn-like projections, as defined previously.31,32 A schistocyte was considered as an irregularly shaped RBC fragment and keratocytes as an RBC fragment with only 1 to 2 spicules.32

Continuous variables were compared between groups with a Mann-Whitney test, and a χ2 test (or the Fisher exact test when necessary) was used for categorical variables. The level of significance was set at P < 0.05.

Clinical findings at the time of diagnosis of VOTO in dogs

Data regarding cardiac auscultation at the time of diagnosis were available for all dogs with VOTO. A left systolic basilar heart murmur (median grade, 4; IQR, 4 to 5) was found in each dog, with a palpable thrill in 29 of 62 (47%) dogs.

Conventional echocardiographic and Doppler findings in dogs with VOTO

Hematologic analyses were performed on all included dogs (ie, 62 dogs with VOTO and 20 healthy dogs).

Comparative echocardiographic parameters assessed in 62 dogs with congenital VOTO (ie, AS or PS) with (n = 29) or without (33) keratocytosis.

Comparative echocardiographic parameters assessed in 62 dogs with congenital VOTO (ie, AS or PS) with (n = 39) or without (23) acanthocytosis.

Nevertheless, 3 of 4 dogs with anemia had ∆P values > 200 mm Hg. Interestingly, the dog (a Jack Russell Terrier) with the highest ∆P value (340 mm Hg) also had the most severe anemia (hemoglobin concentration of 9.8 g/dL and hematocrit of 27.6%; reference range, 35% to 52%) and schistocytosis (16.5% of RBCs), with no visible acanthocyte or keratocyte. In this dog, anemia resolved 1 week after balloon valvuloplasty (postoperative ∆P, 217 mm Hg vs 340 mm Hg) while schistocytosis progressively decreased over the next month and had disappeared by 2 months postprocedure. The other 3 dogs did not undergo balloon valvuloplasty.

Congenital VOTO is among the most common congenital heart diseases in dogs.33,34,35 Nevertheless, to the best of our knowledge, no studies have specifically focused on IH secondary to these defects. In veterinary medicine, most descriptions of mechanical hemolysis have referred to device embolization for patent ductus arteriosus occlusion.22,23,24,25 Similarly, in human patients, hemolysis is a common complication of cardiac valve prostheses and vascular devices20 and is also described in patients with moderate to severe spontaneous AS.1,2,3,4,5 The underlying mechanism is considered as being mediated by high shear forces exerted on the erythrocyte membrane owing to high-velocity flow through stenotic orifices.3,5

The present study provided original data on hematologic abnormalities in 62 dogs with PS or AS by comparison with an age-matched control group. Due to its prospective observational nature, epidemiological, clinical, echocardiographic, and Doppler variables were available for all recruited animals.

Our results confirmed that RBC morphological abnormalities are apparently common in dogs with congenital VOTO, the majority remaining subclinical, as described in dogs with vascular devices.24 These RBC morphological abnormalities, including schistocytosis, acanthocytosis, and keratocytosis, were detected in nearly 90% of affected dogs and were associated with anemia in 6%. This high percentage of dogs with schistocytosis, acanthocytosis and/or keratocytosis may be due, at least in part, to the high proportion of dogs with severe and very severe VOTO, as nearly 90% of the included animals had ∆P values > 80 mm Hg (representing 1 limitation of the present study). In human patients with AS, IH with or without anemia is a common complication that usually develops for ∆P values > 50 mm Hg, corresponding to shear stresses of at least 4,000 dynes/cm2 on RBCs.1,2,3,4,5,36 By comparison, the shear stress exerted on RBCs for a ∆P value of 80 mm Hg can be estimated at 6,400 dynes/cm2.1,36

The high proportion of severe and very severe VOTO in the present study may also have contributed to an unknown extent to the lack of statistical association between erythrocyte abnormalities (incidence of schistocytosis, acanthocytosis, and keratocytosis) and tested Doppler parameters (ie, ∆P values and stenosis severity grade). Similarly, although the number of obstructive lesions might be expected to influence erythrocyte alteration severity, no statistical association was found between the incidence and magnitude of schistocytosis, acanthocytosis, and keratocytosis and the number of stenotic lesions (1 vs > 1).

Intravascular hemolytic anemia is a well-described complication in human patients with AS.2,3,4 Interestingly, in the present study, intravascular hemolytic anemia was observed in only a few dogs (6%), all affected by PS. However, the diagnosis of IH in these 4 dogs was based solely on concomitant erythrocyte morphological alterations (ie, acanthocytosis, schistocytosis, and keratocytosis). Although schistocytosis and keratocytosis usually result from direct physical damage to the erythrocytes secondary to turbulent blood flow or vascular abnormalities such as endothelial membrane alteration, disseminated intravascular coagulation, glomerulonephritis, or hemangiosarcoma, they can also develop in association with other disorders such as myelofibrosis, dyserythropoiesis, chronic doxorubicin toxicosis, or oxidative stress.32,37,38,39 Nevertheless, in the present study, there were no clinical signs suggestive of defective erythropoiesis, no history of previous doxorubicin administration, and no other evidence of oxidative stress. Various disease conditions associated with acanthocytosis have been reported in dogs, including neoplasia and nonneoplastic diseases such as renal failure, gastroenteritis, hepatitis, and immune-mediated diseases.31,39 This lack of specificity of schistocytosis, keratocytosis, and acanthocytosis for IH may be overcome by measuring blood (eg, lactic dehydrogenase activity, haptoglobin, or erythrocyte creatine concentrations) or urinary markers (eg, hemosiderin), which were not used in the present study.4,20 In human patients, diagnosis of the intravascular hemolytic nature of the anemia can also be based on the direct measurement of the erythrocyte life span by use of expiratory carbon monoxide concentration.40 Unfortunately, these tests were not available during the study period.

This study presented several limitations. The majority of diseased dogs were characterized by severe or very severe VOTO. The clear impact of less severe PS and AS on RBCs therefore remains unknown. The control group was composed of apparently healthy dogs, and therefore subclinical diseases associated with RBC abnormalities cannot be excluded with certainty. Exercise testing was not done. Therefore, exercise intolerance was a spontaneous complaint provided by the owner and could have biased the present result on clinical signs. Additionally, nearly three-fourths of the included dogs with VOTO were receiving 1 or more treatments for heart disease, which may have influenced blood pH and thus RBC shape to an unknown extent.41,42 As blood gases were not assessed in the present study, blood pH of the diseased dogs could not be compared to that of the healthy control dogs, representing another limitation of the present study. Lastly, nearly one-fourth of the included dogs with congenital VOTO also had VSD, which might have contributed to an unknown extent to the RBC fragmentation.

In conclusion, erythrocyte damage (ie, acanthocytosis, schistocytosis, and keratocytosis) is common in dogs with AS and PS, with hemolytic anemia in a few cases with severe or very severe PS. Consequently, IH needs to be considered as the cause of anemia in canine patients with both severe or very severe VOTO and anemia. Further prospective studies are needed to better document these findings and elucidate the physical mechanisms underlying such erythrocyte damage in dogs.