Duplicated brainstem auditory evoked response recordings from both ears of a 19-month-old male Royal yak that was deaf in the left ear. Flat tracings from the left ear are consistent with deafness. Peaks I, II, III, and V, and troughs Ia and Va are identified in the tracings from the hearing right ear. Peak I is thought to be generated by cranial nerve VIII as it enters the brain, with subsequent peaks generated in the brainstem. Large head size and skull thickness reduce the detected response amplitudes. Horizontal time scale, 1 ms/division; amplitude scale, 0.2 μV/division. 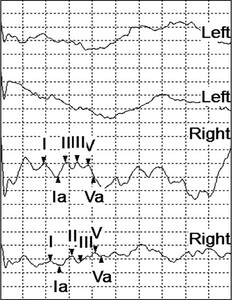 Hearing was assessed using the brainstem auditory evoked response (BAER) on yaks restrained in the head gate of a grooming chute.

For the first time, probable sensorineural deafness has been confirmed to be present in Royal yaks. The disorder is assumed to be congenital and associated with white pigmentation, based on the pattern of occurrence in other species.

Hearing was assessed using the brainstem auditory evoked response (BAER) on yaks restrained in the head gate of a grooming chute.

For the first time, probable sensorineural deafness has been confirmed to be present in Royal yaks. The disorder is assumed to be congenital and associated with white pigmentation, based on the pattern of occurrence in other species.

Deafness associated with white pigmentation occurs in multiple species, including human, dog, cat, and others.1 Gene loci (with various names in different species) produce white hair by suppressing dermal melanocytes. Secondary consequences of gene effects on the skin and hair may also occur in the eye, where the iris may appear blue as a result of pigment absence, and in the cochlear stria vascularis. The stria vascularis is a 3-cell-wide tissue of the cochlear wall that has a middle layer of melanocytes and is responsible for secretion of potassium ions into the cochlear duct endolymph. Suppression of strial melanocytes by white pigmentation genes causes degeneration of the stria vascularis and secondary loss of cochlear hair cells during the perinatal period, resulting in sensorineural deafness. Deafness may be unilateral or bilateral, but is usually total for an affected ear.

Yaks were domesticated on the Asian Qinghai-Tibetan Plateau. Approximately 14 million domestic yak (Bos grunniens) are currently located throughout the Qinghai-Tibetan Plateau and the Himalayan and Altai regions in Asia, where they are widely used for labor, meat, milk, and fiber. The number of wild yak (Bos mutus) has shrunk from millions to less than 15,000 in the past century.2 An estimated 5,000 domestic yaks are present in North America, growing from a small number imported around the start of the 20th century.3 North American breeders further narrowed this gene pool by selecting for certain preferred traits. Consequently, the herd of registered North American yaks consists almost entirely of descendants of as few as two dozen of the yaks originally imported into North America.

Three color phenotypes are present in North American yaks based on the presence of recessive alleles of the white gene locus (referred to as piebald here): solid, Trim, and Royal. The solids are all black with either a gray muzzle (known as Black or Native Black), or black with a black muzzle (Imperial). Images of solid, Trim, and Royal yaks can be seen in the work by Peterson et al.4 The Trim are heterozygous for piebald, with small areas of white that generally occur in some or all of the following areas: forehead, lower hind legs, and tail. Trims are black elsewhere, and can be either Black Trim or Imperial Trim. The Royals are homozygous for piebald, normally black over the hump and shoulder area, with significant areas of white on the rear half of the animal, but also with a forehead blaze. Yaks with all-white pigmentation are present among North American animals, but the numbers are small and the pigmentation, in all evaluated instances, is the result of early crossbreeding with Charolais cattle (Bos taurus). Yaks were crossbred with bison (Bos bison) and domestic cattle early after North American introduction to improve production.3 Other color phenotypes are recognized in Tibet, but are not present in North America. The heterozygous and homozygous white patterns in North American yaks are the result of the gene KIT (proto-oncogene receptor tyrosine kinase [KIT]).4,5

Subjects were BAER hearing-tested at the annual national show of two US yak registry organizations—US Yaks and the International Yak Association—held at the National Western Stock Show in Denver, CO, in January 2022. Twelve animals were tested, ranging in age from 4 months to 8 years, consisting of 5 males and 7 females, and divided by phenotype into 11 Royal and 1 Trim. Show participants were encouraged to bring animals suspected of being deaf to provide affected individuals for testing, potentially biasing the tested subject population. Consanguineous relationships were present among the tested subjects, but could not be avoided because of historic genetic bottlenecks and the existence of a small number of highly influential males and females in the pedigrees of most North American yaks.

Animals were restrained in the head gate of a grooming chute for BAER testing. BAERs were recorded (Sierra Wave; Cadwell) using a standard clinical protocol.6 A ground subdermal needle electrode was placed in the skin of the neck or the snout. The reference electrode was placed at the vertex, and active electrodes were placed over the tragus of each ear. The foam tip of an insert earphone transducer was held in the opening of the ear canal. Rarefaction click stimuli were presented at a rate of 11.33/second, a duration of 0.1 millisecond, and an intensity of 94 dB nHL (normal hearing level), without contralateral masking noise. Responses to a minimum of 700 clicks were averaged twice for each ear to confirm response repeatability using a recording bandwidth of 100 Hz to 3 kHz. Hearing thresholds could not be determined in the test setting, so assessment of hearing was based on the presence or absence of the BAER waveform. Peak amplitudes are not generally analyzed because of variation caused by nonphysiologic origins, such as ear electrode placement and ear canal cleanliness, as well as head size and extent of movement artifacts. Attempts were not made to visualize the tympanum, nor were they made to remove cerumen as a result of subject resistance.

Animal responses were classified as bilaterally hearing, unilaterally deaf, or bilaterally deaf based on the presence or absence of the pattern of peaks seen in other bovid species that occur in the first 10 milliseconds of the response.7,8 The threshold of extant hearing in hearing ears was not quantified, but pigment-associated deafness in other species is manifested consistently as total deafness in an affected ear.

BAER recordings were similar to those recorded in other species, consisting of a series of peaks that occurred within 6 milliseconds of the onset of the stimulus click (Figure 1). By convention in other species,6 the peaks were labeled with Roman numerals I, II, III, and V, with the peak IV seen in humans assumed to be merged with peak V, as in most other domestic mammalian species. Peak I is thought to be generated at the entry of cranial nerve VIII into the brain whereas later peaks are generated in the brainstem.6 Peak latencies were consistent among animals.

Eleven Royal phenotype yaks were BAER-tested. Six were female with ages ranging from 4 months to 8 years. Five were bilaterally hearing whereas 3 males and 3 females were affected. Three affected were unilaterally deaf, all in the left ear, and 3 were bilaterally deaf. (The percentage of Royal yaks deaf in one or both ears was 54.5%, but the small sample size makes this an unreliable prevalence estimate for Royal yaks in the general population.) The BAER test of the single tested Trim yak (female, 2.5 years) showed bilateral hearing, but this does not suggest that heterozygous piebald yaks (Trims) cannot be deaf in one or both ears. No solid-color yaks were tested. None of the tested yaks had a blue iris.

For the first time, BAER testing of a limited number of North American yaks showed the presence of unilateral or bilateral deafness in animals with the Royal phenotype. Further studies will be required to provide a reliable estimate of the prevalence of the disorder and whether deafness occurs in Trims—animals heterozygous for the piebald locus. Blue irises are frequently associated with pigment-associated deafness in other species,1 but none were present in the tested yaks. Queried yak owners were not familiar with blue irises occurring in domesticated yaks.

Postnatal BAER development in bovids is minimal, reflecting the precocial level of nervous system development in newborn animals.8 As a result, the young age of several tested yaks in our study would not have influenced the ability to assess the presence of deafness.

Although deafness in the tested animals could have been a result of other causes, the presumption must be that the origin is genetic, consistent with the association between hereditary deafness and white pigmentation in numerous other species,1 and the presence of deafness in a 4-month-old yak in our study, where postnatal nonhereditary causes of deafness such as otitis interna are unlikely. Further support comes from the identification of variations in the KIT gene as causative for deafness in other species,1 and KIT being the gene responsible for white in yaks.4,5 Based on the findings from our study, and the behavioral observations of yak breeders where deafness has only been seen in Royal yaks, the deafness falls within the categorization of pigment associated.

Deafness has been reported in Hereford cattle (B. taurus) that were bred for increased white pigmentation,10 but deafness prevalence in domestic cattle appears to be uncommon. However, this has not been widely investigated.

Crossbreeding of yaks with domestic cattle and bison occurred early after introduction of the species into North America.3 Recognition of this history has led to recent efforts by yak registries to quantify cattle DNA introgression in registered animals. The domestic yak genome has been sequenced,11–13 and methods have been developed to use triallelic DNA single nucleotide polymorphisms to distinguish between yaks and yak–cattle hybrids.14 This triallelic single nucleotide polymorphism test has become a standard part of the North American yak registration process. All yaks BAER-tested in our study were submitted for registration and confirmed to be free of recently introduced cattle DNA.

The implication for breeders of the presence of deafness in North American yaks is essentially a need for cautious watchfulness. Unilaterally deaf animals may exhibit difficulty localizing sound sources, but their deficit will otherwise be undetected except by BAER testing and will not affect daily life. Bilaterally deaf cows may exhibit inappropriate neglect of newborn calves that they do not hear, and a deaf calf may likewise fail to interact appropriately with its mother. Any bilaterally deaf yak would potentially be subject to undetected dangers such as predators or motor vehicles. Predation in North America is of concern in only a few isolated ranches, and herd behavior likely provides some safety for affected animals in those cases. Yaks are normally restricted to fenced pastures, so opportunities for motor vehicle interactions are limited. Breeders should be alert to increased numbers of affected animals over time, as that would likely not be beneficial for the overall population. Inheritance of deafness in other species with pigment-associated deafness does not usually follow simple Mendelian genetics,1 so informed breeding advice cannot currently be provided. Pedigree analysis of affected animals and/or development of a DNA marker for detection of carriers of a causative gene variant would be useful. The narrow gene pool in yaks makes molecular genetic studies of deafness and other diseases and phenotypes quite tractable.