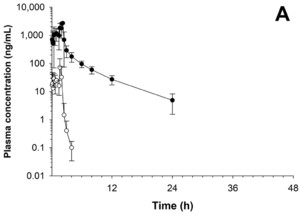 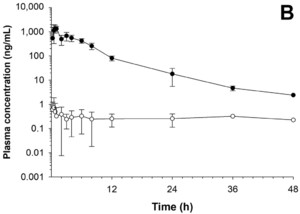 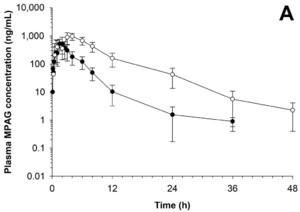 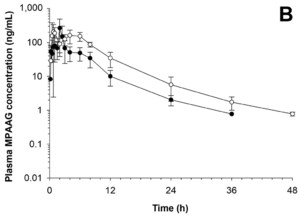 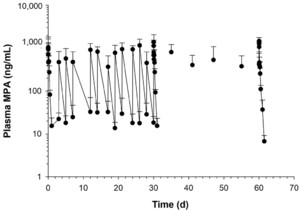 Autoimmune diseases, such as hemolytic anemia, thrombocytopenia, pemphigus, and vasculitis, in horses can be challenging with regard to treatment.1–5 Corticosteroids, injectable preparations of gold salts, and, to a lesser extent, azathioprine are the only immunosuppressive treatments that have been used somewhat frequently in horses.1–3,6 These agents are often effective. However, the high doses of corticosteroids necessary for successful treatment are associated with an increased risk of adverse effects, including corticosteroid hepatopathy, laminitis, and iatrogenic hyperadrenocorticism. Injectable preparations of gold salts are not always readily available.1,4,7,8 Therefore, investigations of other immunosuppressive agents for treatment of autoimmune diseases in horses are needed.

Mycophenolate mofetil is the prodrug of MPA. Mycophenolic acid is a potent and reversible inhibitor of de novo purine biosynthesis required for T- and B-lymphocyte proliferation9,10; thus, MPA reduces the production of antibodies. Although MMF was originally developed to suppress organ rejection in human transplant recipients, more recently it has been used as a treatment for immune-mediated diseases in people and (as the oral form) small animals.11–16 Safety studies of cats17–19 and pharmacokinetic and pharmacodynamic studies20,21 of dogs have provided evidence of the safety (although not necessarily the efficacy) of MMF administered at a dose of 10 mg/kg twice daily in cats and a dose of 8 to 15 mg/kg twice daily in dogs. Adverse effects of MMF treatment generally involve the gastrointestinal tract (eg, vomiting and diarrhea).12,13,19

Prior to commencement of the study, all horses were considered healthy on the basis of physical examination findings and results of a CBC; assessments of serum activities of aspartate aminotransferase, creatine kinase, alkaline phosphatase, and sorbitol dehydrogenase; and concentrations of total bilirubin, BUN, and creatinine. Throughout the study, all clinicopathologic analyses were performed with standard protocols at 1 clinical pathology laboratory.a Horses did not receive any other medications for at least 2 weeks prior to participation in the study. The study was approved by the Institutional Animal Care and Use Committee of the University of California-Davis (protocol 20319).

Determination of MMF and MPA concentrations in plasma samples

Mycophenolate mofetile and MPAe were combined into 1 working solution. Plasma calibrators were prepared by dilution of the working standard solution with drug-free equine plasma to concentrations between 0.1 and 4,000 ng/mL. Calibration curves and negative control samples were prepared fresh for each quantitative assay. In addition, quality control samples (equine plasma fortified with analytes at 1 of 3 concentrations within the standard curve) were included with each sample set as an additional check of accuracy.

Prior to analysis, 500 µL of plasma was diluted with 100 µL of water containing 0.01/ng mL of a deuterated standard (d4-MMFe or d3-MPAe) and 2 mL of 0.1M phosphate buffer (pH 7). The samples were vortexed briefly to mix and underwent solid-phase extraction in extraction columns.f Samples were loaded onto the columns and then washed with 3 mL of water each before elution with 3 mL of methanol. Samples were dried under nitrogen and dissolved in 150 µL of 5% acetonitrile in water with 0.2% formic acid; 40 µL of the resultant solution was injected into an LC-MS/MS system.

The concentration of MMF and MPA was measured in plasma by LC-MS/MS with positive electrospray ionization. Quantitative analysis of plasma was performed on a triple quadrupole mass spectrometerg that had a liquid chromatography system.h The spray voltage was 4,500 V, vaporizer temperature was 217°C, and sheath and auxiliary gas were 40 and 25 arbitrary units, respectively. Product masses and collision energies of each analyte were optimized by infusion of the standards into the mass spectrometer. Chromatography involved a 10 cm × 2.1 mm × 3-µm columni and a linear gradient of acetonitrile in water, both with 0.2% formic acid, at a flow rate of 0.4 mL/min. The initial acetonitrile concentration was held at 10% for 0.4 minutes and then ramped to a concentration of 99% over 4.5 minutes and held at that concentration for 0.3 minutes before re-equilibration for 4.3 minutes at initial conditions.

The concentrations of MPAG and MPAAG were measured in plasma samples by LC-MS/MS with negative electrospray ionization. Quantitative analysis of plasma samples was performed on a triple quadrupole mass spectrometerm coupled with a liquid chromatography system.n The spray voltage was 2,900 V, vaporizer temperature was 400°C, and sheath and auxiliary gas were 50 and 15 arbitrary units, respectively. Chromatography was performed as described for assessment of MMF and MPA plasma concentrations, except the acetonitrile concentration was held at 5% for 0.2 minutes, ramped to a concentration of 60% over 4.2 minutes, and then increased to a concentration of 95% over 0.1 minutes and held at that concentration for 0.1 minutes before re-equilibration for 3.4 minutes at initial conditions.

By use of commercially available software,o noncompartmental analysis was used to determine pharmacokinetic values for MPA. The time to maximal plasma concentration and Cmax were determined on the basis of visual inspection of the plasma concentration versus time plot. The terminal-phase half-life, AUC from time 0 hours to the last measured concentration, AUC from time 0 hours to infinity, and extrapolated percentage of the AUC were determined. The AUC was calculated with the log-linear trapezoidal rule and was extrapolated to infinity by dividing the last measured plasma concentration by the terminal slope. Fluctuation, or the percentage difference between peak and trough concentrations, within a dosing interval and the accumulation at steady state for both the 30- and 60-day time points were determined. Pharmacokinetic parameters for MMF and MPA are reported as mean ± SD, median, and range.

All values were generated with noncompartmental analysis. Fluctuation represents the percentage difference between peak and trough concentrations within a dosing interval. Accumulation index was determined at steady state by use of the equation (AUC [(30 days or 60 days), τ])/(AUC [1, τ]), where 30 and 60 represent doses on day 30 and 60 and 1 represents the first dose.

See Table 2 for remainder of key.

Mycophenolate mofetil administered as a single dose IV or PO in phase 1 of the study or administered PO long-term (multiple doses) in phase 2 of the study was well tolerated by the horses. No clinical adverse effects were noted for any horse, and no horse had any consistently abnormal clinicopathologic findings (Supplementary Tables S1 and S2, available at: avmajournals.avma.org/doi/suppl/10.2460/ajvr.82.6.502). Results of the CBC and serum biochemical analysis were reported for only 5 horses at week 3 because the blood sample for 1 horse clotted following collection and its analysis was not possible.

The pharmacokinetics of MPA following administration of MMF by IV infusion in cats, rabbits, and humans has been reported.18,23,24 In the present study, samples were collected throughout the infusion as well as for a period following completion of the infusion. Although plasma MMF concentrations were low throughout the infusion, plasma MPA concentrations remained high. Interestingly, the time when MPA appeared in the plasma varied among horses (15 minutes to 1.5 hours), which suggested individual variation with respect to the rate of conversion. In the present study, the horses' plasma MPA concentrations peaked during the infusion; however, in humans, peak concentrations are not achieved until the end of the 60-minute infusion.23 Because blood samples were not collected during the infusion in other studies,18,24 it was not possible to compare the data for horses with those for cats or rabbits.

Among the horses of the present study, MMF was well tolerated following PO administration. Although it was not possible to directly compare Cmax determined in the present study with values determined in previous studies because of different dosing protocols, time to maximal plasma concentration was comparable among studies, with maximum concentrations achieved between 30 minutes and 1 hour in all species studied (humans and dogs).20,21,23,25

On the basis of the results of the present study, MPA was further metabolized to MPAG and MPAAG in horses, as described for other species. Both metabolites reportedly can undergo extensive enterohepatic recirculation as evidenced by a second peak on the plasma concentration curve occurring 6 to 12 hours after MMF administration.25,26 Such a second peak was observed at approximately 3 hours after MMF administration in the present study, which suggested that enterohepatic recirculation may occur in horses as well, albeit earlier than described for other species. If comparatively early enterohepatic recirculation occurs in horses, this could ultimately prolong the pharmacological effect of MMF because of prolonged residence time in the body. The mean terminal half-life following single-dose IV or PO administration to horses was similar to that previous reported for dogs (5.5 ± 3.8 hours).20

Long-term administration of MMF to humans and dogs is commonplace12,13,25,27,28; therefore, the pharmacokinetics of MMF following multiple-dose PO administration in horses was investigated to assess the potential for bioaccumulation and nonlinear elimination. The multiple-dose PO protocol of 5 mg/kg once daily for 30 days followed by once every 48 hours for 30 days was based on the protocol used in a previous study22 of the pharmacokinetics of azathioprine in horses. As evidenced by the accumulation ratio of 1.0 in the present study, MMF does not appear to bioaccumulate when administered long-term at the dosage used, regardless of administration daily or every 2 days. The mean terminal half-life after single-dose PO administration (4.02 ± 1.10 hours) was in agreement with the mean terminal half-life after 30 days (3.62 ± 0.89 hours) and 60 days (4.59 ± 1.25 hours) of drug administration. Thus, when MMF is administered with the long-term dosing protocol used in the present study, the drug follows linear elimination kinetics.

The limitations of the present study were the small number of horses used and the restricted duration (60 days) of PO administration of MMF, which is a shorter period than the long-term dosing that is often required for treatment of autoimmune diseases. The dosage of 5 mg of MMF/kg given to horses PO once daily or every 2 days was not evaluated for efficacy in the treatment of disease. Results of a recent human study27 suggest an AUC of 30 to 60 mg•h/L provides better results in patients with renal transplants; this is much higher than the AUC achieved with either the IV or PO dosing in the horses of the present study. Future pharmacokinetic and clinical studies are needed to determine efficacious doses in horses with autoimmune diseases.