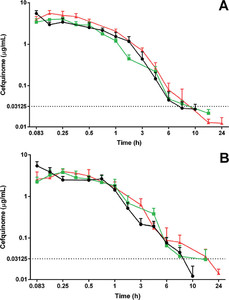 To compare the pharmacokinetics of cefquinome sulfate in ducklings and goslings after IV or IM administration of a single dose.

To compare the pharmacokinetics of cefquinome sulfate in ducklings and goslings after IV or IM administration of a single dose.

Cefquinome is a fourth-generation cephalosporin developed solely for veterinary use.1 The drug has potent activity against a broad spectrum of bacterial species, such as Riemerella anatipestifer,2 which is a gram-negative bacterium that can cause severe, contagious disease in various avian species.3 Although the pharmacokinetics of cefquinome has been investigated in various animal species, only 1 study4 has been reported regarding the pharmacokinetics in young waterfowl specifically, and the Muscovy ducks (Cairina moschata) in that study were 2 months old. Nevertheless, anatipestifer disease primarily affects young (2- to 8-week-old) goslings and ducklings, with high mortality rates possible.5 Therefore, the purpose of the study reported here was to investigate the pharmacokinetics and bioavailability of cefquinome in goslings and ducklings after IV or IM administration of a single dose and determine whether differences existed in the disposition of 2 formulations—injectable cefquinome sulfate and injectable cefquinome sulfate suspension (a slow-release product)—between goslings and ducklings.

A total of 216 healthy Muscovy ducklings and 216 healthy Sichuan white goslings (Anser cygnoides) were used in the study. All birds were 1 week old and weighed approximately 100 to 120 g. All ducklings and goslings were provided by the Department of Laboratory Animals, Rongchang campus, Southwest University.

Birds were maintained in cages in an environmentally controlled room and fed an antimicrobial-free balanced diet ad libitum with free access to fresh water. They were allowed to acclimate to this setting for 1 week before the experiment began. Animal care and use for the study was in accordance with China's legal requirements for humane treatment, and the study protocol was approved by the Southwest University Animal Care Committee.

A modified HPLC method was used to determine plasma cefquinome concentrations.4 The HPLC systemc was equipped with a quaternary pump, online degasser, autosampler, column heater, and UV detector. First, 600 μL of methanold was added to a 300-μL plasma sample by vortex blending for 1 minute, followed by centrifugation at 16,600 × g for 15 minutes at 4°C. Then, the supernatant was transferred to a new tube, dried with nitrogen gas, reconstituted in 300 μL of mobile phase, and filtered through a 0.45-μm nylon syringe filter. The mobile phase consisted of sodium perchloratee-phosphatef-triethylaminee buffer (pH, 3.6) and acetonitriled at a ratio of 88:12 (vol/vol) provided in isocratic form at a flow rate of 1.0 mL/min. Chromatographic separation of cefquinome was achieved on a reverse-phase 250 × 4.6-mm C18 columng with an injection volume of 20 μL. Column temperature was maintained at 30°C. The wavelength for UV detection was 266 nm.

Percentage recovery and intraday and interday coefficients of variability were determined via repetitive analysis of the plasma samples spiked with cefquinome at concentrations of 0.05, 0.5, and 5 μg/mL (Supplementary Appendix S1, available at: avmajournals.avma.org/doi/suppl/10.2460/ajvr.81.11.873). The lower limits of detection and quantification were 0.01 and 0.03 μg/mL, respectively, and were calculated on the basis of signal-to-noise ratios of 3 and 10, respectively.6 In addition, the HPLC method had an optimal specificity for determining cefquinome by chromatographic analysis, as indicated by the lack of a chromatographic peak for blank plasma samples at the retention times of cefquinome (11.5 to 12.0 minutes; Supplementary Figure S1, available at: avmajournals.avma.org/doi/suppl/10.2460/ajvr.81.11.873).

Most pharmacokinetic parameters were calculated with the classic equations associated with compartmental analysis, including those for t1/2α, t1/2β, volume of distribution at steady state, AUC, and total body clearance. The concentration-versus-time curves for IV and IM cefquinome administration in ducklings and goslings were best fitted by means of a 2-compartment modeling approach with the following equation:

where t is time, A is the zero-time intercept of the distribution slope in the compartment model, B is the

Values for maximum plasma concentration and tmax were obtained from the fitted concentration-versus-time curves based on results of the compartmental models.8 The bioavailability of cefquinome was calculated as (AUCIM/DoseIM) × 100/(AUCIV/DoseIV).

After IV and IM administration of cefquinome (2 mg/kg) in healthy 1-week-old ducklings and goslings, the disposition kinetics of cefquinome were best fitted by a 2-compartment model as reported for chickens (2 mg/kg)1 and 2-month-old ducks (5 mg/kg).4 Mean t1/2β following IV administration was slightly shorter in the ducklings (0.972 hours) than in the goslings (1.737 hours) of the present study and was also shorter than the mean t1/2β reported for chickens (1.29 hours),1 2-month-old ducks (1.57 hours),4 and black swans (1.69 hours).9 Considered together, these findings suggest that cefquinome is rapidly eliminated in waterfowl, particularly in ducklings. For the ducklings of the present study, mean volume of cefquinome distribution at steady state (0.042 L/kg) was considerably lower than that in goslings (0.432 L/kg). This limited distribution could be explained by the low fat solubility and protein-binding activity of cefquinome,10 which may be more pronounced in ducklings.

With IM administration of injectable cefquinome sulfate in ducklings, mean tmax and t1/2α were 0.163 and 0.343 hours, respectively, and were shorter than respective values for goslings in the present study (0.203 and 0.483 hours), chickens (0.25 and 0.58 hours),1 and 2-month-old ducks (0.38 and 0.46 hours).4 These findings indicate rapid absorption and distribution of cefquinome following IM administration, particularly in ducklings. Mean t1/2β in ducklings (1.717 hours) was similar to that of goslings in the present study (1.403 hours), 2-month-old ducks (1.79 hours),4 and chickens (1.35 hours).1 Bioavailability (mean, 113.9%) was excellent in the goslings but was low in the ducklings (67.5%). In goslings, mean bioavailability of both injectable cefquinome sulfate and injectable cefquinome sulfate suspension (123.1%) exceeded 100%, which might be explained by the inclusion of only 1 blood sample/bird in parameter estimations; however, the ducklings, for which bioavailability was < 100%, were sampled similarly. The reason for the higher bioavailability in goslings requires further investigation.