Scatterplots of cardiac width versus sternal width (A through C) and cardiac width versus thoracic width (D through F) measured on radiographs obtained for 19 juvenile ospreys (A and D), 22 adult ospreys (B and E), and all 54 ospreys (combination of the juvenile and adult ospreys and 13 ospreys of undetermined age; C and F). The line in each panel represents the line of best fit for the available data. Notice that the scale on the x-axis in panels A through C differs from that in panels D through F. 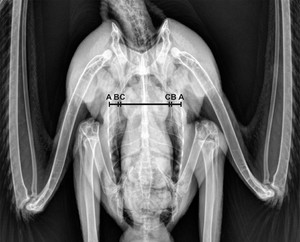 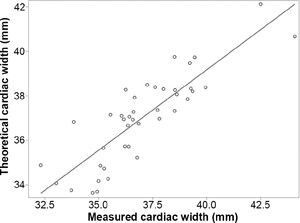 Measurements of the radiographic cardiac silhouette of ospreys (Pandion haliaetus)

To evaluate and report measurements of the radiographic cardiac silhouette of healthy juvenile and adult ospreys (Pandion haliaetus).

Radiographs of ospreys were assessed to determine cardiac width at the widest point as well as sternal width and thoracic width at the same level. Two-way mixed-effects models were used to evaluate interrater reliability for mean rating. Multivariable linear regression analysis was used to create predictive models of cardiac width and to establish a theoretical reference range for healthy ospreys.

Ospreys are sentinels used in monitoring environmental health. Environmental factors may have an impact on the cardiac health of ospreys, but reference values for healthy ospreys have not been established for use in assessing cardiomegaly in this species. The radiographic ratios and predictive model obtained in this study may be useful for objective evaluation of cardiomegaly in ospreys.

To evaluate and report measurements of the radiographic cardiac silhouette of healthy juvenile and adult ospreys (Pandion haliaetus).

Radiographs of ospreys were assessed to determine cardiac width at the widest point as well as sternal width and thoracic width at the same level. Two-way mixed-effects models were used to evaluate interrater reliability for mean rating. Multivariable linear regression analysis was used to create predictive models of cardiac width and to establish a theoretical reference range for healthy ospreys.

Ospreys are sentinels used in monitoring environmental health. Environmental factors may have an impact on the cardiac health of ospreys, but reference values for healthy ospreys have not been established for use in assessing cardiomegaly in this species. The radiographic ratios and predictive model obtained in this study may be useful for objective evaluation of cardiomegaly in ospreys.

Radiographic measurement of the cardiac silhouette is a survey diagnostic test that is commonly used in conjunction with physical examination to determine whether a patient likely has cardiac disease. However, physical examination of avians has limitations because of the high heart rate of most species, which makes it difficult to evaluate birds for murmurs or arrhythmias. Radiographs are commonly obtained and evaluated in avian species, but differences among species limit the usefulness of the few reference values currently available.

Radiographic measurements have been established to provide standards by which to determine cardiomegaly. Common causes of cardiomegaly in wild avian patients include congenital abnormalities (iron storage disease),9 viral disease (avipoxvirus),10 endoparasitism (Plasmodium spp),11 and toxins (fumonisin B1 and moniliformin).12

Ospreys (Pandion haliaetus) are piscivorous raptors in the family Pandionidae of the order Accipitriformes.13 Similar to most of the other species in that order, ospreys are diurnal birds that rely on sight to hunt prey. They have been used as a sentinel species for monitoring aquatic environmental changes since the 1960s because they are apex predators in the piscivorous food chain, have a long life span (the oldest osprey was reportedly 25 years and 2 months old)14 and thus a long-term opportunity for bioaccumulation of lipophilic contaminants, can adapt to nest disturbances and human encroachment, and are found in almost all countries.15 However, the authors are not aware of any reported standards for radiographic measurements of the cardiac silhouette of ospreys. The purpose of the study reported here was to determine reference values for the cardiac silhouette in this species to enable monitoring of diseases and conditions attributable to toxins that may affect ospreys and the ecosystems they inhabit.

Data were collected by retrospective evaluation of records for juvenile and adult ospreys examined at the Clinic for the Rehabilitation of Wildlife in Sanibel, Fla, between January 2015 and March 2018. Standard procedures at arrival included a physical examination, hematologic analysis (manual blood count, PCV, and total solids concentration), examination of feces, and radiographic evaluation.

Birds included in the study had no evidence of cardiac disease as determined on the basis of the history (eg, no known exposure to toxins) and results of a physical examination (no dyspnea, murmurs or arrhythmias, or coelomic distention) and manual blood count (no polycythemia, anemia, or blood parasites). Because of the potential impact of dehydration on size of cardiac chambers, birds with a plasma protein concentration > 4 g/dL were excluded.

Radiographs were obtained while birds were anesthetized with isoflurane or awake and hooded. Radiographic images were obtained by use of a single digital system.b Focus distance was set at 100 cm, and exposure settings differed minimally among birds (65 to 70 kVp and 3.2 to 4.0 mA·s).

Radiographs were examined to ensure there was correct ventrodorsal alignment (ie, the keel and vertebrae were overlaid and there was symmetric extension of the limbs).1 To ensure measurements were comparable among birds, rotated views were excluded from the study.

There are conflicting reports regarding the reliability of sexing ospreys by examination of their plumage (females can have darker feathers).16,17 In addition, weight ranges for adult male and female ospreys overlap, which makes it difficult to determine sex on the basis of body weight.17 Therefore, differences between sexes were not considered in the study.

A significant difference in body weight between juvenile and adult female conspecifics has been reported.3 In addition, other investigators2,18 have reported an increase in relative cardiac size with an overall decrease in body weight. To reduce potential confounding attributable to age, birds in the study were limited to those with a body weight between 1.0 and 1.7 kg. Birds in the study were categorized as juvenile, adult, or unknown for statistical purposes.

Radiographic measurements for each bird were obtained by 3 of 4 observers (KMTW, ALD, SPK, and LABA), all of whom are veterinarians and were trained by and obtained measurements under the supervision of a board-certified avian specialist who had experience with radiography (GHB).

Single measurements for cardiac width, sternal width, and thoracic width were obtained from radiographs of each bird by the observers; observers were not aware of the operators who obtained radiographs to limit potential operator-observer bias. All measurements were obtained by use of digital software.c Cardiac width was measured at its widest point; sternal width and thoracic width were measured at that same level (Figure 1).

Results of linear regression analysis for the prediction of theoretical cardiac width in healthy ospreys.

Combined represents the combination of sternal width and thoracic width.

Values were considered significant at P < 0.05.

where age is an indicator of adult or juvenile status (value = 1 for adult and 0 for juvenile).

where SD = 0.75 mm. By use of this equation, measurements of cardiac width for 34 of 41 (83%) ospreys with known juvenile or adult status were within the theoretical reference range.

Although diagnostic tests such as echocardiography, CT, and MRI may be ideal for use in diagnosing cardiac disease, these modalities are not widely used in wildlife medicine because of the advanced skills and specialized equipment required and the cost for consultation with specialists. Therefore, these tests were not included in the present study. However, other noninvasive diagnostic tests may prove to be a useful alternative in cardiac assessment of ospreys and other avian species. There is an association between cardiac troponin I concentrations and cardiac damage in double-crested cormorants.20 Reference limits for diagnostic laboratory tests (eg, cardiac bio-markers) could complement the results reported here and aid clinicians in assessment of cardiac health of ospreys.

One of the limitations of the study reported here was the possibility of subclinical cardiac disease that did not result in observable illness or clinical signs, which would have potentially biased the reported estimates (ie, larger values). Additionally, few healthy ospreys are admitted to wildlife hospitals unless they are found as juveniles or misplaced during a storm, so there may have been bias in the present study.

Another limitation was the potential effect of sex and body weight on cardiac measures. Ospreys may differ in body weight on the basis of geographic location attributable to migration. Ospreys are present in Florida throughout the year, but they migrate to other regions of the United States. Juvenile ospreys are not dimorphic, and there may be some overlap in adult plumage, which may cause results of sexing to be inaccurate. In the study reported here, sex was reported for 41 ospreys; because of this small number, differences between sexes could not be evaluated as a confounding factor. Sex may be determined through laboratory testing, but the cost may be prohibitive for wildlife clinics; therefore, sex was not determined in this manner. Furthermore, sex may affect the physical fitness status and, therefore, cardiac width. Additional studies are needed to determine the manner in which differences in sex, age, and body size impact cardiac width.

Finally, radiographic measurements were obtained by observers under the supervision of a board-certified avian specialist by use of 1 digital program to limit bias. However, this would not fully prevent interobserver differences and must be considered a limitation to the study; veterinarians making measurements in field settings will have interobserver differences on the basis of the use of a variety of digital programs as well as human error.

Ospreys are often used as sentinel species to monitor the health of ecosystems. Despite their importance in this role, there is a paucity of information on standard measures for ospreys on which to base potential deviations. The study reported here provided a standard by which juvenile and adult ospreys can be evaluated radiographically for cardiomegaly, which increases their usefulness as sentinels in native habitats. Further studies are warranted to develop more robust standards for evaluating osprey health and, consequently, the health of local environments.