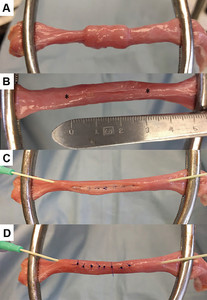 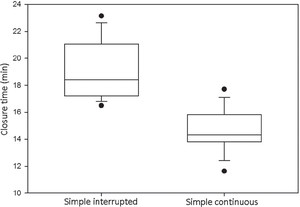 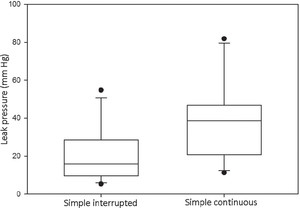 Search for other papers by Kim A. Aeschlimann in
Current site
Google Scholar
PubMedClose
DVM

OBJECTIVE To compare the leak pressure and amount of time required to perform closure for 2 double-layer esophagotomy closure techniques.

OBJECTIVE To compare the leak pressure and amount of time required to perform closure for 2 double-layer esophagotomy closure techniques.

The indications most commonly cited for esophageal surgery in dogs and cats are foreign body retrieval and esophageal stricture.1 Historically, surgery of the esophagus has been associated with a higher incidence of postoperative complications than for any other segment of the gastrointestinal tract.2 Approximately 50% of dogs and 33% of cats have complications after esophageal surgery, and 20% to 50% of humans have wound dehiscence after esophagectomy procedures.1 The complications most commonly recorded for veterinary species after esophagotomy are dehiscence, esophageal strictures, regurgitation, and aspiration pneumonia.1–4 The causes of death or euthanasia most commonly reported are severe respiratory distress and sepsis.1 It is presumed that optimizing mucosal apposition and minimizing incisional tension will reduce the incidence of strictures and dehiscence.2–5

Currently, there is no definite consensus regarding the proper technique for closure of an esophagotomy. In 1 retrospective study1 of data from 7 institutions, 52% of esophageal surgeries were closed in a single layer, 41% were closed in 2 layers, and 7% of closures were not recorded.1 Investigators of 1 study6 determined that double-layer simple interrupted closure results in better mucosal apposition and higher immediate bursting wall tension (3.5 × 105 dynes/cm) than single-layer simple interrupted (0.5 × 105 dynes/cm) and simple continuous (0.9 × 105 dynes/cm) closures, but double-layer closure requires significantly more time to complete and is more technically challenging.6

Segments of the intrathoracic portion of the esophagus were harvested from healthy 8- to 9-week-old university-owned pigs (n = 38) that were euthanized for reasons unrelated to the present study. Each pig was assigned an identification number, and sex, age, and body weight of each pig were recorded. Segments were harvested within 60 minutes after the pigs were euthanized. Each segment was at least 8 cm in length, and the cranial end of each segment was marked with a 1-cm slit made with Metzenbaum scissors. Each esophageal segment was placed in a plastic baga filled with approximately 500 mL of lactated Ringer solution; bags were sealed and chilled overnight at 4°C. The time between harvest (the moment harvesting began) until testing (the moment a sample was removed from the refrigerator for testing) was recorded.

All incisions were closed with 4-0 polydioxanone suture with a swaged small half-circle taper needle.f Esophagotomies were closed with a double-layer simple interrupted pattern or a double-layer simple continuous pattern. Each suture bite was placed 2 mm from the cut edge of the incision; sutures were placed at intervals of 2 to 3 mm (Figure 1). For the closure of the inner layer (mucosa and submucosa), knots were placed in the lumen of the esophagus. For the closure of the outer layer (muscularis and tunica adventitia), knots were placed on the outside of the tunica adventitia. For the simple interrupted pattern, each suture was tied with 2 square knots. For the simple continuous pattern, each suture was tied with 3 square knots. The amount of time required for closure was recorded as the interval from the first pass of suture in the inner layer to tying of the last square knot of the final suture in the outer layer.

Testing of each segment was conducted. The first esophageal segment tested was a simple interrupted pattern, and the second esophageal segment tested was a simple continuous pattern. Testing of segments was alternated between suture patterns until all esophagi were tested. The order in which segments were tested within a suture pattern was determined by use of a random number generator.

After the incision was closed, lactated Ringer solution with green food coloringg was injected through the cranial catheter into the lumen of the esophagus at a rate of 100 mL/h. Leak pressure was defined as the pressure recorded at the caudal catheter when a drop of fluid began to accumulate on the outside of the esophagus and the pressure reached a plateau on the monitor. The total volume infused was recorded, and the time to leakage was calculated by use of the volume infused and the infusion rate. Bursting wall tension was calculated as P√(V/πL), where P is leak pressure, V is volume infused, and L is length of the segment.

After testing was completed, each esophageal segment was incised longitudinally on the side opposite the sutured incision. Segments were inspected for defects of the luminal surface, including mucosal perforations caused by passage of the plastic object, mucosal lacerations created during the initial incision, or defects in the incisional closure.

Data were assessed for normality with the Shapiro-Wilk method and equality of variances with the Brown-Forsythe method. The dependent variables including amount of time from harvest to refrigeration, duration of storage, volume infused, duration of infusion, and amount of time required to complete the closure met the assumptions of normality and equality of variances and were compared between suture patterns by use of a t test. Pig body weight, esophageal segment length, incision length, leak pressure, and bursting wall tension were not normally distributed and were compared between suture patterns with the Mann-Whitney rank sum test. All analyses were conducted with commercial software,h and significance was set at P < 0.05 for all analyses.

The difference in total volume infused and time to leakage between suture patterns likely was a consequence of the difference in leakage pressure. As the pressure needed to cause leakage increased, so did the volume needed to achieve that pressure as well as the time necessary to infuse that volume.

In the present study, 5 samples were excluded because of improper knot placement. In clinical practice, it is likely that such errors will occur and may interfere with tissue apposition and result in a lower leakage pressure.

Measurements of bursting wall tension in double-layer simple interrupted esophagotomy closures (3.5 × 105 dynes/cm) reported in another study6 are not within the range detected in the present study (0.16 × 105 dynes/cm to 2.89 × 105 dynes/cm). This likely was a result of differences in study design, including the species (canine vs porcine), segment of esophagus (cervical vs thoracic), set-up of the testing apparatus (submerged in saline [0.9% NaCl] solution vs suspended between forceps), method of fluid infusion (intraluminal fenestrated catheter vs transmural IV catheter), and status of the animal when the suturing was performed (living vs cadaver).

Cadaveric tissues were used in the present study; thus, it was not possible to assess the healing response of the tissue. It is likely that the inflammation that occurs in tissues of live animals in the immediate postoperative phase of healing will cause swelling and thus improve the seal along the incision. Additionally, it is possible that different suture patterns may result in differing degrees of mucosal apposition and thus alter esophageal healing. Further studies with live animals may be helpful in assessing differences in incisional healing between suture patterns.

Motion of the head and neck has been proposed as a reason for the high incidence of postoperative complications after esophageal surgeries.1 Because of the use of immobile, intrathoracic segments of cadaveric esophagus in the present study, the influence of motion on leakage pressure relative to suture pattern could not be addressed. Future studies with cervical portions of the esophagus in live animals or techniques that involve portions of the cervical esophagus may be useful in investigating the role of motion on incision integrity.

The study reported here was performed with porcine esophagi; therefore, results may not directly represent those for esophageal surgery in cats and dogs. Although there were no significant differences between suture pattern groups regarding age and body weight in the present study, it is possible that proportional differences in the size of the esophagus of baby pigs relative to that of adult pigs may influence the comparison among swine of other ages. Additionally, there are differences in the anatomic structure of the esophagus across species, such as the composition of skeletal and smooth muscle fibers in the muscularis layer and the degree of keratinization of the mucosal layer.7–10 However, these differences are much less pronounced in the cranial portion of the thoracic esophagus,7–10 which was the portion of esophagus used in the present study. Therefore, it would be anticipated that results obtained from the porcine specimens of the present study likely can be applicable to other species. However, additional studies with canine or feline cadaveric esophagi would be needed to confirm this assumption. To the authors' knowledge, the study reported here was the first in which porcine esophagi were used to assess leakage pressure.

The simple continuous pattern could be performed significantly more rapidly than the simple interrupted pattern while maintaining a better immediate seal as indicated by a significantly higher median leak pressure. These data provided evidence to suggest that double-layer simple continuous closure patterns may be superior to simple interrupted closure patterns for esophagotomy. Further studies in live animals will be necessary to reach definitive conclusions regarding the optimal suture pattern to use for closure of an esophagotomy.