Endoscopic view obtained from a canine cadaver with anatomically normal airways with the endoscope placed cranial to the carina. Airways leading to the right lung lobes are on the left, and airways leading to the left lung lobe are on the right. Notice that portions of RB1 and LB1 are perpendicular to the long axis of the trachea and have a slit-like appearance. The opening to RB1D1 is indicated (dashed line). See Figure 1 for remainder of key.

Endoscopic view obtained from a canine cadaver after STR at 30% of the tracheal length. Notice that the position of RBI changed so that the opening is readily visible from the carina. Additionally, the slit-like appearance has changed to a more oval appearance (dashed line). See Figure 1 for remainder of key.

Endoscopic view obtained from a canine cadaver after STR at 50% of the tracheal length. Notice that the ventrally dependent RB2 was lifted from the floor of the right principal bronchus and has a more easily identified circular appearance during endoscopy with the endoscope placed cranial to the carina. See Figure 1 for remainder of key.

Endoscopic view obtained from another canine cadaver after STR at 50% of the tracheal length. Notice that RB3 is more perpendicular to the long axis of the trachea and has a more circular appearance. Both branches of LBI are now easily visible during endoscopy with the endoscope placed cranial to the carina. See Figure 1 for remainder of key. 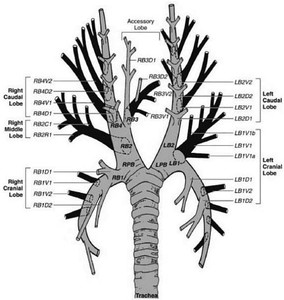 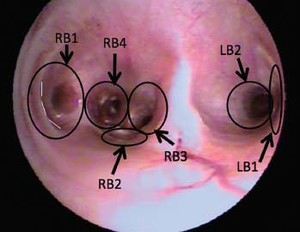 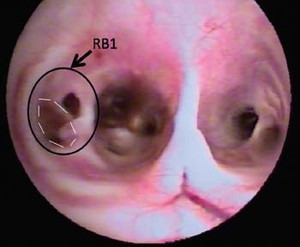 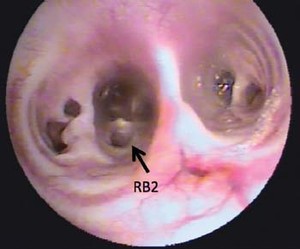 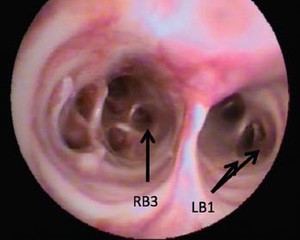 OBJECTIVE To evaluate the effects of successive large-segment tracheal resection and anastomosis on tracheal diameter and position of lobar bronchi in dogs.

PROCEDURES Right lateral radiographs were obtained for all dogs and used to measure tracheal length. Dogs were then euthanized, and successive segmental tracheal resections (intervals of 10% from 20% to 50% of the tracheal length), each of which was followed by anastomosis, were performed in each cadaver. Tracheobronchoscopy was performed before the first tracheal resection and after each of the anastomoses to evaluate tracheal diameter and changes in position of lobar bronchi.

OBJECTIVE To evaluate the effects of successive large-segment tracheal resection and anastomosis on tracheal diameter and position of lobar bronchi in dogs.

PROCEDURES Right lateral radiographs were obtained for all dogs and used to measure tracheal length. Dogs were then euthanized, and successive segmental tracheal resections (intervals of 10% from 20% to 50% of the tracheal length), each of which was followed by anastomosis, were performed in each cadaver. Tracheobronchoscopy was performed before the first tracheal resection and after each of the anastomoses to evaluate tracheal diameter and changes in position of lobar bronchi.

Segmental tracheal resection and anastomosis is not commonly performed in dogs, but it may be the only viable option for the treatment of tumors, strictures, and necrotic conditions.1–3 Extensive resections predispose patients to partial or complete dehiscence and postanastomotic tracheal stenosis as a result of scar formation.4–6 The maximum extent of STR associated with an acceptable clinical outcome is unknown for humans or dogs. In humans, a significant increase in complication rates is observed with resections ≥ 4 cm in length.7 In only a few studies have investigators attempted to address the limits of STR in dogs. It has been suggested that as much as 60% of the tracheal length can be resected in adult dogs.4 Results of tension induced by anastomosis, short-term postoperative clinical outcome, and histologic abnormalities after extensive STR and anastomosis in 42 research dogs have been reported.4 In that study,4 6 dogs died during surgery or within 48 hours after surgery. Partial to complete dehiscence of the anastomotic site was detected in 15 dogs (46% to 63% of the trachea removed). Only 21 dogs (20% to 58% of the trachea removed) had primary healing of the anastomotic site. In a later study,5 15 to 17 tracheal cartilages from 7 medium-sized dogs were resected (approx 37% to 42% of the tracheal length). One dog was euthanized for exercise intolerance; all the remaining dogs developed immediate postoperative complications that included coughing, wheezing, and hoarseness.5 Evaluation of long-term postsurgical clinical performance was not reported in the aforementioned studies,4,5 and all dogs were euthanized at study conclusion.

Five adult sexually intact (3 males and 2 females) Beagles were used in the study. The dogs had participated in a pharmacological study prior to inclusion in this study. Dogs were cared for in accordance with established principles,8 and all procedures were approved by the University of Missouri Animal Care and use Committee.

Right lateral radiographs were obtained for all dogs and used to measure tracheal length. Radiographic magnification was corrected by the use of a standard measuring bar.

Tracheobronchoscopy was performed with a flexible endoscopeb prior to the first tracheal resection and serially after each anastomosis. During the interval between resections and during tracheobronchoscopy, the external surgical field was covered with surgical sponges soaked in warm (37°C) saline (0.9% NaCl) solution to minimize tissue dehydration. Tracheoscopy was performed first, and it included both video recordings of the entire length of the trachea and photographs of each of 3 locations (surgical site [indicated by pushing the tip of a 22-gauge needle through the tracheal wall into the lumen at the intended surgical site], 2 cm cranial to the surgical site, and 2 cm caudal to the surgical site). Bronchoscopy also included both video recordings and photographs of the carina (allowing for visual examination of lobar bronchi); photographs were centered over the right main stem bronchi and left main stem bronchi. One investigator (CRR) performed all tracheobronchoscopic examinations and reviewed all video recordings and photographs to score alterations in structural anatomy. Bronchial anatomy was as described in another study9 (Figure 1). Changes in tracheal diameter were graded in accordance with the system described in another study.10 Briefly, decreases in tracheal diameter were classified as grade I (25%), grade II (50%), grade III (75%), or grade IV (100%).

Feasibility of incremental STR and anastomosis

Alterations in position of lobar bronchi

Results of the present study suggested that STR at 60% of the tracheal length was unlikely to be successfully performed in dogs. The study was performed on a small number of fresh canine cadavers. One should expect that tissues of live patients will be more elastic than will cadaver tissues. Despite this, large tracheal resections (> 50% of the tracheal length) in live patients may result in tearing of tracheal cartilage, inability to appose tracheal segments, or the need for extreme neck ventroflexion to achieve tracheal anastomosis. In live patients, extensive tension could disrupt the segmental blood supply to the trachea, thus decreasing healing and predisposing patients to necrosis and dehiscence.4,5 Investigators of 1 study4 found that STR of up to 58% of the tracheal length achieved primary healing of the anastomosis, provided tension measured by use of a tensiometer at the anastomotic site was < 1,700 g. In another study,5 in which 15 to 17 tracheal cartilages were removed, excessive manipulation of the trachea (which was necessary for use of the tensiometer) caused additional trauma and resulted in poor mucosal healing and an increase in the amount of collagen, size and number of blood vessels, and number of inflammatory cells at the anastomotic site. The authors concluded that use of the tensiometer in a clinical setting might not be feasible.5 Furthermore, all dogs in that study5 developed a cough, and one of them had to be euthanized because of severe respiratory distress. The study reported here revealed secondary bronchial conformational changes that were evident after STR of > 20% of the tracheal length. These bronchial changes may have been responsible for the respiratory signs reported in other studies5,6 that involved extensive STR. In contrast, no clinical signs were observed for up to 150 days after STR (8 tracheal cartilages) and anastomosis in 12 Beagles.4–6,12

It was unexpected that extensive STR and anastomosis would result in a minimal effect on the luminal diameter of the trachea. Tension exerted as a result of STR and anastomosis appeared to predominantly pull the lobar bronchi cranially and did not narrow the tracheal diameter. Only in 1 cadaver was the tracheal lumen decreased, and that decrease (approx 25%) was relatively minimal. We believe that the space between the rings (annular ligament) stretched under tension, which resulted in elongation. Eventually, this tension was distributed over all segments of the respiratory tract, which resulted in changes in bronchial anatomy. Resection and anastomosis of 20% of the tracheal length was easily performed and did not result in any changes in position of the lobar bronchi. With less extensive STRs, stretching of the annular ligaments and consequent cartilage separation prevented conformational changes in lobar bronchi. It may not be easy to compensate for additional tension (at least acutely), which could lead to changes in position of the lobar bronchi. Tension-relieving techniques have been described that can be used to decrease dehiscence and scar-related tracheal stenosis after STR and anastomosis.1,5,6 Investigators of 1 study6 performed STR and anastomosis (0 to 13 tracheal cartilages) with sling sutures in 68 dogs and found that anastomosis at < 750 g of tension typically healed well. Furthermore, that same study6 found that anastomotic tension as high as 2,550 g was effectively alleviated by the use of sling sutures. We chose to not perform a tension-relieving technique to allow full evaluation of changes caused by the STR and anastomosis. Although tension-relieving techniques may be successful for decreasing tension at an anastomotic site, they may result in even more dramatic stretching of the remaining airways.

Techniques for controlled cervical flexion have been described. Postoperative cervical flexion can be achieved by suturing the intermandibular skin to the sternum followed by application of a sling.13–15 Cervical flexion, even if temporary, may not be tolerated well by most patients or by the owners of patients undergoing those procedures.

In humans, predisposing factors for complications after STR and anastomosis have been described and include the need for another surgery, STR ≥ 4 cm in length, diabetes mellitus, laryngotracheal resections, surgery performed in patients ≤ 17 years old, and the need for preoperative tracheostomy.7 In dogs, complications associated with STR and anastomosis reportedly include suboptimal tissue apposition and leakage, dehiscence, and stricture. Poor tissue apposition and dehiscence may lead to subcutaneous emphysema, pneumomediastinum, and, potentially, pneumothorax of various degrees.1,3,5 Postoperative stricture formation is thought to be secondary to excessive tension at an anastomotic site. This is the complication reported most commonly and may lead to severe respiratory distress.4–6

In the study reported here, tracheal resections of 20% of the tracheal length were readily achievable in canine cadavers and did not appear to grossly affect tracheal diameter or position of lobar bronchi, which we believe was the result of postanastomotic stretching of the annular ligament. Resections ≥ 30% of the tracheal length altered conformation of the lobar bronchi, probably as a result of increased tension. These bronchial changes may be associated with clinical signs and should be considered before extensive tracheal resections are performed in canine patients.