A custom-made cardiac needle is inserted into a heavily sedated humpback whale stranded in North Carolina to inject a saturated solution of potassium chloride as the final part of a new euthanasia technique designed to be more humane and environmentally friendly. (Photo by Sarah Mallette) 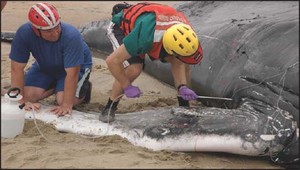 For most veterinarians, the only thing worse than euthanizing a dying animal is lacking the means of ending its suffering in a humane and timely manner. Such is the dilemma sometimes confronting volunteer response teams dispatched to aid whales stranded along the coastal United States.

As a member of one of the many federal Marine Mammal Health and Stranding Response teams along the U.S. coasts, Dr. Craig Harms is well acquainted with the dangers—as well as the logistic and emotional hardships—associated with humanely killing a stranded whale with no chance of survival.

Dr. Teri Rowles coordinates the Marine Mammal Health and Stranding Response Program for the National Oceanic and Atmospheric Administration's Fisheries Service. Citing reports from field responders, Dr. Rowles noted that roughly 54 stranded whales, dolphins, and porpoises were euthanized each year on U.S. beaches from 2009–2013. Each year, as many as four of these terminally ill and injured animals were baleen whales—a suborder of cetaceans that includes the humpback, right, and blue whales.

According to Dr. Harms, who is an associate professor of aquatic, wildlife, and zoological medicine at the North Carolina State University College of Veterinary Medicine, whales cannot cope with the effects of gravity without the buoyancy of seawater, so breathing becomes increasingly difficult for a beached whale. Sunlight causes the whale's skin to burn and blister. Seagulls scavenge the whale while it's still alive.

Eventually, the pressure on the whale's lungs and heart results in cardiopulmonary collapse and the animal's death.

Whales may become stranded in remote locations, creating any number of safety hazards for response teams and difficult situations for rescuers.

Chemical euthanasia options for such massive animals are limited, given the large quantities of drugs required and the risk of relay toxicity to scavengers, particularly when pentobarbital-containing euthanasia solutions are used.

The 2013 edition of the AVMA Guidelines for the Euthanasia of Animals state, “Currently available euthanasia methods generally have significant limitations that fail to meet aesthetic or other conventional standards for euthanasia of marine mammals under field conditions, particularly for large animals.”

Methods of euthanizing free-ranging whales and other marine mammals endorsed by the guidelines include overdoses of injectable anesthetics and detonation of directional explosive charges near the animal's brain.

A study published in the Journal of Wildlife Diseases this February describes a new technique for euthanizing baleen whales that involves injecting a cocktail of readily available and relatively inexpensive sedatives and pain relievers followed by a definitive method of euthanasia. Dr. Harms is one of the researchers who developed the method.

The technique begins with injecting a combination of midazolam, acepromazine, and xylazine. Specially made long, thin needles are used to pierce the thick whale blubber and minimize discomfort. Once the whale is heavily sedated, a saturated solution of potassium chloride is administered into the heart via another custom-made needle, this one long and thick, and a pressurized canister.

“The technique allows the responder to work mostly from the head end of the whale, away from the more hazardous fluke end,” Dr. Harms said.

Midazolam is a controlled substance, Dr. Harms explained, and can be omitted if controlled substances cannot be deployed to the field. The drugs have the potential to cause secondary toxicoses in scavengers, but the risk is much less than for pentobarbital, he said. Tissue residue analysis revealed minimal risk, except possibly at the xylazine injection site if the drug is administered intramuscularly instead of intravenously, but, Dr. Harms added, the site could be trimmed for separate disposal.

The full study is available online at www.jwildlifedis.org.

Identification of a pregnancy-supporting hormone in horses has resolved a reproductive mystery that has puzzled scientists for decades, reports a team of researchers led by a University of California-Davis veterinary scientist.

Characterization of this newly identified hormone, dihydroprogesterone, may also lead the way to better hormone therapies for preventing preterm labor in pregnant women. The findings are reported online Feb. 18 in advance of the March 18 print edition of the Proceedings of the National Academy of Sciences at http://goo.gl/7sR3WX.

The role of progesterone is so important for a successful pregnancy that reproductive biologists have widely accepted for more than 80 years that pregnancies in humans and other mammals could not be carried to term without it.

The fact that mares have no detectable concentrations of progesterone during the last half of their pregnancy has led scientists to suspect that their bodies produce another, heretofore undefined, steroidal hormone that takes the place of progesterone in supporting the pregnancy.

In this study, the researchers demonstrated in pregnant mares and through laboratory analyses that the hormone DHP is as potent as progesterone in activating the progesterone receptors of horses, triggering endometrial growth and maintaining pregnancies to term.

“DHP is potentially the first of a new class of naturally occurring progesterone-like hormones that could prove valuable in sustaining pregnancies and preventing pre-term labor in women, as well as horses, and captive wildlife species,” said Dr. Alan J. Conley, a reproductive physiologist at the UC-Davis School of Veterinary Medicine and senior author on the study.

AVMA President Clark K. Fobian commended the president and congressional leadership “for their diligence in passing a bill that helps ensure that Americans have access to the safest and highest-quality food supply in the world.”

The legislation authorizes a number of veterinary research and food safety programs the AVMA calls vitally important, including the following:

The Farm Bill includes a provision that cracks down on the abusive practice of animal fighting by making it a federal crime to attend or cause a minor under the age of 16 to attend these events.

U.S. pigs are infected with a second and possibly a third strain of the coronavirus that causes porcine epidemic diarrhea.

Officials with the Ohio Department of Agriculture and Iowa State University each announced the discovery of at least one new strain of the PED virus, which has caused illnesses and deaths in at least 25 states since it was discovered in the U.S. in April 2013. It was unclear whether the laboratories had identified the same PED virus strain.

Ohio authorities separately announced in February that a department virologist, Dr. Yan Zhang, had found an unrelated deltacoronavirus in samples taken from pigs that had clinical signs similar to those of PED and transmissible gastroenteritis. Further research was needed to determine whether the deltacoronavirus is a cause or contributor to disease.

Officials at Iowa State University announced Jan. 30 that, among PED viruses isolated from 15 infections, five had substantial enough genetic differences that it was unlikely they evolved from the PED virus previously identified in the country. Yet those five were similar to one another.

At about the same time, said Dr. Tony M. Forshey, Ohio's state veterinarian, Dr. Zhang, and others in the state agriculture department's Animal Disease Diagnostic Laboratory had sequenced the genome of a new strain of PED virus that had been associated with milder clinical signs than seen in most PED infections.

The AVMA has created new Web pages and a new flier to help educate pet owners about pet care subjects.

One Web page asks pet owners “Who's in charge of your animal's care while you're away?” The page is at www.avma.org/public under “Emergency Care.” The page advises pet owners about what to consider before taking a trip without their pet.

A number of new Web pages are available at www.avma.org/public under “Pet Care.” The new pages cover spaying and neutering, senior pets, and diseases. The AVMA also offers client brochures on these and other topics at www.avma.org/products.

The new flier, for AVMA members only, informs pet owners about pet safety in cold weather. The flier is available to download at www.avma.org/PracticeManagement under “Client Materials.”

Dr. Kimberly May, AVMA director of professional and public affairs, welcomes suggestions for other topics for client materials at kmay@avma.org or 800-248-2862, ext. 6667.

Some 450 people attended the 94th annual meeting of the Conference of Research Workers in Animal Diseases, Dec. 8–10, 2013, in Chicago.

The meeting was dedicated to Dr. Fred W. Scott, founding director of the Cornell Feline Health Center, who spent much of his career improving the quality of life for cats through research and education.

After receiving his DVM degree from Cornell University in 1962, Dr. Scott spent two years in private practice in Vermont. He was introduced to veterinary virology by conducting research on foot-and-mouth disease at Plum Island Animal Disease Center.

Dr. Scott returned to Cornell to study virology, earned a doctorate, and joined the College of Veterinary Medicine faculty in 1968 as an assistant professor of virology, rising to professor, a position he held until his retirement in 1996. From 1974–1996, Dr. Scott was also the founding director of the Cornell Feline Health Center.

He was especially interested in research on feline viral diseases, the effects of viruses on the developing fetus, and immunoprophylaxis of viral diseases.

Dr. Scott served as president of the American Association of Feline Practitioners and chaired the AVMA Council on Biologic and Therapeutic Agents.

Dr. Baines (UP ‘83) will fill a position left vacant since December 2013 when Dr. Peter F. Haynes retired as dean of the LSU veterinary school. Dr. Baines currently is the associate dean for research and graduate education and the James Law Professor of Virology at the Cornell University College of Veterinary Medicine. His study of herpes simplex virus assembly has been funded by the National Institutes of Health since 1995.

Dr. Ogilvie (ONT ‘75) succeeded Dr. Raymond F. Sis as dean of the SGU veterinary school. Since 2008, Dr. Ogilvie had been a visiting professor at SGU. He was dean of the Atlantic Veterinary College at the University of Prince Edward Island from 1998–2008. He worked on Prince Edward Island with the provincial government and in private practice before joining the Atlantic Veterinary College as a founding faculty member in 1985.

Dr. Sis had served as dean of the SGU veterinary school since April 2003 and was named dean emeritus. Prior to joining SGU, he taught for 35 years at Texas A&M University College of Veterinary Medicine & Biomedical Sciences.

Dr. Karen Martens Brandt became director of the AVMA Education and Research Division on Feb. 10; she was promoted from her job as an assistant director in the same division. Dr. Martens Brandt replaces Dr. David E. Granstrom, who is now the AVMA associate executive vice president and chief operating officer.

Her foremost task was to complete the AVMA Council on Education's submission to earn renewed recognition from the Department of Education to accredit veterinary colleges.

Dr. Martens Brandt has a comprehensive background in veterinary private practice and academia. She received her DVM degree from the University of Minnesota in 1983. She started teaching four years later at the University of Minnesota Technical College-Waseca veterinary technology program. Dr. Martens Brandt became its program director in 1992 and held the position until the program ended in 1993.

Before and after her foray into veterinary technician education, Dr. Martens Brandt spent many years in dairy and companion animal practice. She came from a small animal practice in Mankato, Minn., prior to joining the AVMA staff.

The American Kennel Club Canine Health Foundation has issued a request for proposals for research on canine health.

The foundation is calling for research proposals on subjects including reproduction, musculoskeletal and neurologic systems, ophthalmology, general canine health and obesity, development of an accurate diagnostic assay for canine hypothyroidism, and epilepsy.