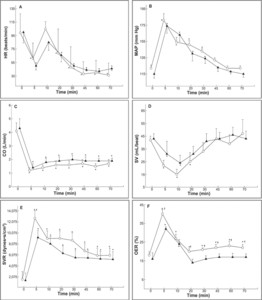 Conclusions and Clinical Relevance—In healthy dogs, both DBTZ and DBK maintained oxygen delivery and oxygen consumption to tissues and blood lactate concentrations within the reference range. However, ventilation should be carefully monitored and assisted when necessary to prevent hypoventilation.

Conclusions and Clinical Relevance—In healthy dogs, both DBTZ and DBK maintained oxygen delivery and oxygen consumption to tissues and blood lactate concentrations within the reference range. However, ventilation should be carefully monitored and assisted when necessary to prevent hypoventilation.

In studies conducted to evaluate hemodynamic effects, CO and oxygen content are measured in mixed-venous and arterial blood samples. Those measurements can then be used to calculate Do2 and

Animals—Five healthy mixed-breed dogs (2 females and 3 males) were used in the study. All dogs were 2 years old, and mean ± SEM weight was 19.3 ± 1.7 kg. Each dog was considered healthy on the basis of history and results obtained via a physical examination, CBC, and biochemical analysis. Food but not water was withheld from each dog for 12 hours prior to anesthesia. The study was approved by the Purdue University Animal Care and Use Committee.

Study design—The study was designed as a randomized crossover study, in which 2 injectable anesthetic combinations, DBTZ and DBK, were administered IM with a 48-hour washout interval between treatments. The DBTZ treatment contained dexmedetomidineb (7.5 μg/kg), butorphanol tartratec (0.15 mg/kg), and tiletamine-zolazepamd (3.0 mg/kg). The DBK treatment contained dexmedetomidine (15 μg/kg), butorphanol (0.3 mg/kg), and ketamine hydrochloridee (3.0 mg/kg). Dogs were anesthetized with sevoflurane for instrumentation. Following instrumentation, hemodynamic measurements were obtained 5 minutes after a surgical plane of anesthesia was achieved via administration of sevoflurane alone; immediately prior to administration of each treatment (DBTZ or DBK; time 0 [baseline]); and 5, 10, 20, 30, 45, 60, and 70 minutes after administration of each treatment.

Anesthesia for instrumentation—For each dog, anesthesia was induced with sevofluranef in 100% oxygen administered via a face mask until tracheal intubation could be achieved. Following intubation, each dog was allowed to breathe spontaneously, and anesthesia was maintained by the use of sevoflurane and a circle anesthesia system while instrumentation was performed. Each dog was positioned in right lateral recumbency on a warm water circulating blanketg; additionally, a warm air blanketh was used to maintain body temperature within the reference range (37.2° to 38.8°C). Instrumentation included a 22-gauge catheteri inserted percutaneously into a dorsal pedal artery for continuous monitoring of arterial blood pressure and for collection of arterial blood samples. A 5F Swan-Ganz catheterj was aseptically inserted into the left jugular vein and advanced into the lumen of the pulmonary artery; its position was confirmed by a characteristic pressure waveform and pressure values detected via an electronic monitor.k The electronic monitor included a pressure transducer, capnography, pulse oximeter, and ECG machine such that direct arterial blood pressure, end-tidal sevoflurane and carbon dioxide concentrations, blood hemoglobin saturation for oxygen, and HR and rhythm (via lead II) were monitored continuously throughout the remainder of the anesthesia session.

Once instrumentation was completed, a surgical plane of anesthesia was achieved for each dog by increasing the amount of sevoflurane that was being administered such that the end-tidal concentration of sevoflurane was 1.5 MAC (3.54%).9 Anesthesia was stabilized at that concentration of sevoflurane for 5 minutes, and then a single set of hemodynamic measurements was recorded. Each dog was then disconnected from the electronic monitor, the arterial and Swan-Ganz catheters were bandaged in place, and each dog was allowed to recover from anesthesia and rest for 6 hours. The instrumentation and data collection for each dog during sevoflurane-induced anesthesia were completed within 60 minutes.

Hemodynamic measurements—Heart rate was obtained via the ECG lead II component of the electronic monitor. Direct blood pressures (SAP, DAP, and MAP) were obtained via an arterial blood pressure transducerl that was connected to the catheter in the dorsal pedal artery and attached to the electronic monitor; the transducer and monitor were calibrated and zeroed to the midpoint of the thorax prior to use on each dog. Cardiac output was determined via a thermodilution technique. Briefly, 3 mL of chilled 5% dextrose solution was administered into the right atrium via the Swan-Ganz catheter over a period of 2 seconds, after which CO was measured by use of a CO computer.m At each data collection time, CO was measured 3 to 4 times and the mean of the 3 most similar values was calculated and recorded. Measurements of core body temperature, mean central venous pressure, mean pulmonary artery pressure, and mean pulmonary artery wedge pressure were obtained directly by means of the Swan-Ganz catheter that was connected to the electronic monitor. All equipment was calibrated and zeroed prior to use for obtaining measurements from each dog.

o2, and OER (Appendix). Oxygen saturation values for both arterial and mixed-venous blood samples were calculated from results obtained via blood gas analyses.14

Administration of DBTZ or DBK—Six hours after cessation of sevoflurane administration, each dog was positioned in right lateral recumbency and reconnected to the electronic monitor. The position of the Swan-Ganz catheter was validated in a similar manner as previously described, and baseline hemodynamic measurements were obtained. Each dog then received DBTZ or DBK in accordance with a randomized assignment. Immediately prior to injection of each combination, the drugs were aspirated into separate syringes and then were mixed in 1 syringe for IM administration in the right or left quadriceps femoris muscle. Following treatment administration, 100% oxygen was provided to each dog via a face mask until tracheal intubation could be achieved (generally 2 to 3 minutes after injection), after which oxygen was provided via the endotracheal tube for the remainder of the anesthesia session. After the last hemodynamic measurements were obtained (70 minutes after treatment administration) for the first treatment, the catheters were bandaged in place and each dog was allowed to recover from anesthesia. Following a 48-hour washout interval, the procedure was repeated for the other treatment. After the final hemodynamic measurements were obtained for the second treatment, the arterial and Swan-Ganz catheters were removed and each dog was allowed to recover from anesthesia.

Each dog received each treatment once with a 48-hour washout interval between treatments.

Within a treatment, value differs significantly (P < 0.05) from the baseline (time 0) value.

Within a time, value differs significantly (P < 0.05) between treatments.

o2, and blood l-lactate concentration for 5 healthy dogs immediately before (time 0) and at various times after IM administration of DBTZ or DBK.

Pulmonary effects of DBTZ and DBK treatments—Results for arterial and mixed-venous blood gas analyses were summarized (Table 3). Both treatments resulted in a decrease in respiratory rate that resulted in hypoventilation and an increase in Paco2 throughout the observation period. For the DBK treatment, PVR was significantly increased from the baseline value at 30 and 70 minutes (Table 1). All mixed-venous blood l-lactate concentrations were within the reference range (0.82 to 1.32 mmol/L)5 and did not vary significantly from the baseline value at any time.

Mean ± SEM values for arterial and mixed-venous blood gas analyses in 5 healthy dogs immediately before (time 0) and at various times after IM administration of DBTZ or DBK.

For each dog, anesthesia was induced and maintained with sevoflurane while instrumentation was performed. When instrumentation was completed, a surgical plane of anesthesia was achieved via administration of sevoflurane (3.54%; 1.5 MAC) and maintained for 5 minutes before hemodynamic measurements were obtained. After the hemodynamic measurements were obtained, sevoflurane administration was ceased and each dog was allowed to recover and rest for 6 hours before the first treatment (DBTZ or DBK) was administered.

Value for DBTZ differs significantly (P < 0.05) from value for DBK.

See Tables 1 and 3 for remainder of key.

In the present study, hypertension (MAP, 115 to 174 mm Hg) was detected for the first 30 minutes after both treatments; thereafter, MAP returned to baseline values. When an α2-adrenoceptor agonist is administered alone, severe hypertension does not generally develop. The hypertension in the dogs of the present study may have been caused by vasoconstriction induced by dexmedetomidine and the increase in HR and positive ionotropic effects attributable to the dissociative drugs, which is a hemodynamic response similar to that when an anticholinergic drug is used to increase HR after administration of an α2-adrenoceptor agonist.6

Cardiac output decreased significantly from the baseline value after administration of DBTZ or DBK in the study reported here. The mean ± SEM CO was 0.9 ± 0.1 L/min for dogs that were anesthetized with dexmedetomidine (20 μg/kg, IV) and maintained at 0.26% end-tidal isoflurane.6 In the present study, the lowest CO (mean ± SEM, 1.2 ± 0.2 L/min) was recorded at 5 minutes after DBK administration. The reduction of CO observed in the present study could have been caused by a substantial increase in SVR that resulted in an increase in afterload that impeded ventricular outflow,6 reflex bradycardia induced by peripheral vasoconstriction, or a decrease in plasma catecholamine concentrations induced by dexmedetomidine that resulted in reduced inotropic support of myocardial contractility.15

o2.18 When Do2 to tissue is inadequate (because of a lack of tissue perfusion, arterial hypoxemia, or both), cells within the tissue will use a variety of methods to compensate for hypoxia in an attempt to sustain energy production via aerobic metabolism.5,8,15,18,19 One method used to increase Do2 to tissues is to increase the OER.5,15,18,19 If Do2 to tissue cannot be increased by the compensatory increase in OER, cells within the affected tissue will transition from aerobic to anaerobic metabolism, of which one of the by-products is l-lactate.5,15,18,19 In a study18 that involved pentobarbital-anesthetized dogs, when the baseline

o2 (4.7 ± 1.0 mL/kg/min) was the highest. The highest OER recorded in the present study was much lower than the critical OER (62%) in dogs reported by investigators of that other study.19 Thus, for the present study, the hemodynamic data and the fact that blood l-lactate concentrations remained within reference limits indicated that the tissues of the study dogs received adequate oxygen throughout the observation period regardless of the treatment (DBTZ or DBK) administered.

For DBTZ and DBK, the reasons Do2 was lowest and OER and

Administration of DBTZ or DBK induced profound respiratory acidosis. The lowest arterial pH (7.19 for DBTZ and 7.20 for DBK) and highest Paco2 (75 mm Hg for DBTZ and 69 mm Hg for DBK), along with a concurrent decrease in respiratory rate, were detected at 10 minutes after administration. A decreased respiratory rate and tidal volume can be induced by all of the drugs used in the combination treatments. Even though the respiratory rates for both treatments were significantly lower than those at baseline, the study dogs remained well oxygenated (Pao2 range, 215 to 436 mm Hg) throughout the observation period because of insufflation with 100% oxygen. The results of the present study indicated that dogs anesthetized with DBTZ or DBK should be provided supplemental 100% oxygen.

o2, and blood l-lactate concentrations as those induced by DBTZ or DBK (Table 4).

The results of the present study and those of another study21 suggest that the hemodynamic response in dogs may be more optimal if a lower dose of DBTZ or DBK is used in combination with an inhalation anesthetic, such as sevoflurane, to yield a more balanced cardiovascular response than that achieved with the higher doses of DBTZ or DBK used in the present study. However, further studies are needed to confirm this observation.

The hemodynamic profiles in dogs after IM administration of DBTZ or DBK were similar, particularly with regard to CO, Do2, and

o2, and characterized by hypertension, an increase in SVR, reflex bradycardia, and a minimal effect on blood l-lactate concentration. Hypoventilation and respiratory acidosis developed after DBTZ or DBK administration, but tissue hypoxia was prevented and improvements in Do2 were achieved by providing dogs with supplemental 100% oxygen.