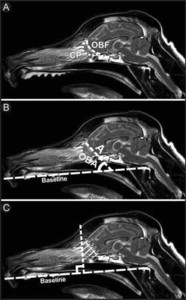 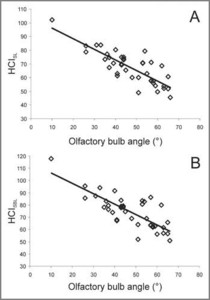 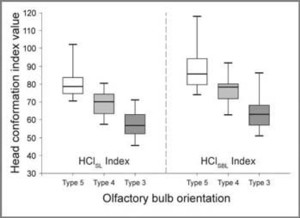 Effect of brachycephalic, mesaticephalic, and dolichocephalic head conformations on olfactory bulb angle and orientation in dogs as determined by use of in vivo magnetic resonance imaging

Objective—To determine the effect of head conformation (brachycephalic, mesaticephalic, and dolichocephalic) on olfactory bulb angle and orientation in dogs by use of in vivo MRI.

Animals—40 client-owned dogs undergoing MRI for diagnosis of conditions that did not affect skull conformation or olfactory bulb anatomy.

Procedures—For each dog, 2 head conformation indices were calculated. Olfactory bulb angle and an index of olfactory bulb orientation relative to the rest of the CNS were determined by use of measurements obtained from sagittal T2-weighted MRI images.

Objective—To determine the effect of head conformation (brachycephalic, mesaticephalic, and dolichocephalic) on olfactory bulb angle and orientation in dogs by use of in vivo MRI.

Animals—40 client-owned dogs undergoing MRI for diagnosis of conditions that did not affect skull conformation or olfactory bulb anatomy.

Procedures—For each dog, 2 head conformation indices were calculated. Olfactory bulb angle and an index of olfactory bulb orientation relative to the rest of the CNS were determined by use of measurements obtained from sagittal T2-weighted MRI images.

Breeding of dogs in accordance with breed standards and by use of closed stud registers, which were developed approximately 100 years ago, has resulted in different physical characteristics in domestic dogs (Canis lupus familiaris) of the various pedigree breeds. Within some pedigree breeds, selection for physical traits considered desirable by dog breeders has resulted in extreme phenotypes for certain characteristics. Some of these phenotypes are associated with health benefits, but many are associated with negative effects on the health and welfare of dogs. These detrimental effects may be directly related to expression of a particular selected phenotype or indirectly related to expression of an unrelated coselected phenotype.

Selective breeding has resulted in adverse health effects in dogs of certain breeds that have a brachycephalic head conformation. Dogs have historically been categorized as having dolichocephalic, mesaticephalic, or brachycephalic head conformations by use of various head conformation (cephalic) indices; 2 of these indices1,2 are more widely accepted3,4 than other indices. The exact demarcation among dolichocephalic, mesaticephalic, and brachycephalic head conformations is poorly defined; 1 author1 classified dogs as brachycephalic, mesaticephalic, or dolichocephalic on the basis of a ratio of skull width to skull length of 0.81, 0.52, or 0.39, respectively. In dogs of brachycephalic breeds, there is marked shortening of the rostral aspect of the skull, particularly the facial bones, nasal cavity, and frontal sinuses, and the orbits are widely spaced and round. Such dogs often have prognathism. In conjunction with a short rostral aspect of the head, dogs of brachycephalic breeds have dorsal rotation of the rostral aspect of the maxilla. These dogs have canine teeth positioned in a nearly horizontal orientation, an altered position of the nasal turbinates, small frontal sinuses (or absent frontal sinuses in dogs with extreme brachycephalia), and a different angle of the nasolacrimal drainage pathway, compared with dogs of other breeds.5 Dorsal rotation of the rostral maxilla in these dogs results in a smaller craniofacial angle,6 compared with dogs of other breeds. The gene associated with a brachycephalic head shape has been mapped to a region on canine chromosome 1 and seems to be common to all dogs of brachycephalic breeds. Candidate genes within this chromosome region that may be associated with brachycephalia include THBS2 and SMOC-2, although there is a high probability that genes in other chromosome regions are modified in brachycephalic dogs.7,8

Dogs of brachycephalic breeds, including Boxers, English Bulldogs, French Bulldogs, Pugs, and Boston Terriers, are popular pets. One reason that has been proposed for the popularity of these breeds is the similarity between the brachycephalic head shape in those dogs and the head shape of human infants.9 The popularity of brachycephalic dogs as pets has resulted in breeding selection for physical appearance rather than for function. Survival of dogs with extreme brachycephalia may only be possible in some instances with breeding, medical, or surgical interventions (eg, artificial insemination and cesarean section in English Bulldogs10). Brachycephalic head conformation is correlated with high bite strength and is considered to impart a selective advantage in certain groups of wild carnivora (eg, hyenas [which are able to crush bone with their jaws] and extinct scavengers); this perceived benefit is the basis for selective breeding of dogs used for fighting.11,12 Comparison of head conformations among dogs of different breeds and dogs within a breed is possible by use of head conformation indices1,2; dogs that have similar head conformation index values have similar head shape characteristics and predispositions to particular diseases. Dogs of brachycephalic breeds are predisposed to the development of a variety of diseases affecting the upper airways, eyes, facial morphology, and CNS. These disease predispositions can be directly or indirectly attributed to the brachycephalic head phenotype; some examples include cleft palate and lip, brachycephalic obstructive airway syndrome, quadrigeminal cysts, and gliomas.9,13–15

Animals—Forty dogs (with various head conformations) evaluated at the University of Glasgow Small Animal Hospital were prospectively included in the study from March 2009 through September 2010. All dogs underwent MRI of the head for evaluation of conditions that did not affect skull conformation or olfactory bulb anatomy. Acquisition of MRI images of heads for calculation of head conformation indices was accomplished during diagnostic MRI without prolonging the duration of the general anesthesia for any of the dogs. Informed consent for use of clinical data was granted by owners of the dogs (the consent statement was included as part of the hospital clinical consent form). Ethical approval was granted by the Faculty of Veterinary Medicine Ethics and Welfare Committee of the University of Glasgow.

Olfactory bulb angle and orientation—The MRI images were acquired with an MRI scanner with a 1.5-T magneta and included T2- and T1-weighted images in sagittal and transverse planes and a T1-weighted transverse image acquired following IV administration of gadopentetate dimeglumineb (94 mg/kg). A sagittal T2-weighted MRI image that included the entire head, from the nasal planum (rostrally) to the intercondylar notch of the foramen magnum (caudally), was one of the images acquired. Measurements of skull dimension were determined from MRI images, and head conformation (cephalic) index values were calculated for all dogs by use of a historical formula1 as follows:

where skull width is the widest width between the outer margins of the left and right zygomatic arch and skull length is the distance from the prosthion (most rostral point of the interincisive suture of the alveolar process of the maxilla) to the inion (most caudal midline point of the external occipital protuberance of the occipital bone). Head conformation index values were also calculated for all dogs by use of another formula2 as follows:

where skull width is the widest width between outer margins of the left and right zygomatic arch and skull base length is the distance from the prosthion to the basion (most rostral point of the ventral margin of the foramen magnum of the occipital bone).

Statistical analysis—Commercially available statistical softwarec was used for all data analyses. Normal Gaussian distributions of data were determined via the Kolmogorov-Smirnov test with the Dallal-Wilkinson-Lilliefor corrected P value. Linear regression analysis was performed to determine the relationship between olfactory bulb angle and head conformation index values. A 1-way ANOVA with a Bonferroni multiple comparison posttest was used to determine whether olfactory bulb orientation was associated with values of head conformation indices.1,2 For all analyses, values of P ≤ 0.05 were considered significant.

Early fusion of ≥ 1 articulations between bones of the ventral part of the cranium during development results in a short basicranial skull axis in dogs with a brachycephalic head conformation.1 This results in the head shape typical for dogs of brachycephalic breeds such as Boston Terriers, Pugs, and Bulldogs; these dogs have shorter and wider heads versus dogs of mesaticephalic or dolichocephalic breeds.4 Olfactory bulbs are completely or partially housed within the ethmoidal fossa of the cribriform plate (depending on the depth of the ethmoidal fossa) and are separated from the rest of the forebrain by a visible groove.16,17 To the authors' knowledge, there is no recognized anatomic term to describe this separation or groove. Therefore, we used the term olfactory bulb fissure to describe the groove separating the olfactory bulb from the rest of the brain. Orientation of olfactory bulbs can be determined directly by evaluating MRI images, particularly T2-weighted images, in which fluid within olfactory bulb fissures can be identified. Olfactory bulb orientation can be indirectly determined by identifying the position of the ethmoidal fossa on CT or lateral radiographic images of the head. The radiographic appearance of the cribriform plate (which outlines the ethmoid fossa) has been described for dogs, including brachycephalic dogs.18 Therefore, indirect determination of olfactory bulb orientation is possible with radiography. In the present study, dogs with extreme brachycephalic conformations had ventral olfactory bulb orientations. Disease predispositions of dogs of different breeds are well described; brachycephalic dogs are predisposed to development of CNS disorders including ventriculomegaly of the lateral brain ventricles, quadrigeminal cysts, and gliomas.19