Scatterplot of right eye anterior chamber fluorescein concentrations (ng/mL) over 5 days for each of 9 healthy dogs with ophthalmologically normal eyes.

Scatterplot of left eye anterior chamber fluorescein concentrations (ng/mL) over 5 days for each of 9 healthy dogs with ophthalmologically normal eyes. 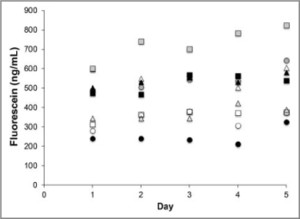 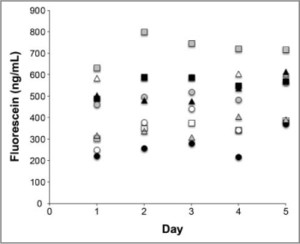 The blood-aqueous barrier of an eye is formed by the endothelium of the iris blood vessels, the nonpigmented layer of the ciliary body epithelium, and the posterior pigmented epithelium of the iris.1–4 These structures usually prevent substances in the blood from entering the eye. When the barrier is disrupted, the blood vessels dilate and plasma proteins leak into the aqueous humor.4,5

Investigations6,15,16 in which fluorophotometry results are calculated as percentage increase in the treated versus the contralateral eye involve use of the following formula:

Although reporting of actual fluorescein concentration is the simplest of these 4 approaches, the possible cumulative effect of repeated daily fluorescein administration has not been investigated and could impact results obtained with that method as well as with percentage increase in posttreatment fluorescein concentration from baseline. Parentally administered fluorescein in dogs is minimally detectable in the ocular aqueous humor 5 to 6 hours after administration, leading to the assumption that repeated fluorescein injections and fluorophotometric evaluations are acceptable after that period.6 When comparing the effects of treatments, investigators in 1 study12 used a 72-hour washout period in which no fluorescein was detected by fluorophotometry prior to beginning the next treatment. Although this washout period was apparently sufficient, studies in which the degree of inflammation is compared with repeated fluorophotometry on a 24-hour basis have not involved assessment of a potential buildup of fluorescein over time.

Animals—Nine dogs (5 females and 4 males; 18 eyes) were used for this study. Six dogs were personal pets owned by faculty and students of Kansas State University, and 3 dogs were research Beagles used in a previous noninvasive study and awaiting adoption. All dogs had a full physical examination, including an ophthalmic assessment performed by a board-certified ophthalmologist (RAA). The ophthalmic portion included rebound tonometry,a slit-lamp biomicroscopy,b and indirect ophthalmoscopy.c All dogs were determined to be free of clinical disease.

Privately owned dogs were allowed to be taken home at night and returned the next day for participation in the study. Research dogs were housed individually in a temperature-controlled environment illuminated by fluorescent lights that were automatically turned on (from 8 am to 8 pm) and off. The Institutional Animal Care and Use Committee at Kansas State University approved the use of all dogs and procedures in the study.

Fluorophotometry—A computerized scanning ocular fluorophotometerd with an anterior chamber adapter was used to scan each eye 60 minutes after IV injection of 10% fluorescein solutione (20 mg/kg). Fluorescein concentrations are reportedly maximal and stable at 30 to 90 minutes, so 1 scan to record anterior chamber fluorescence was performed.6 The dogs were restrained in sternal recumbency with the head stabilized, eyelids held open, and eye of interest positioned in front of the scanner. The left eye was scanned first, followed immediately by the right eye, with ≤ 2 minutes elapsing between scans. Fluorescein administration and fluorophotometry were repeated every 24 hours for 5 days.

The 3 research dogs were sedated for each evaluation with ketaminef (8.8 mg/kg, IM) and xylazineg (0.88 mg/kg, IM) to facilitate positioning in front of the fluorophotometer. These drugs reportedly have no effect on the diffusion of fluorescein through the blood-aqueous barrier.6 No chemical restraint was necessary for the 6 pet dogs because they could be positioned with only minimal manual restraint.

Mean ± SD fluorescein concentrations (ng/mL) in the anterior chamber of the right and left eyes of 9 healthy dogs with ophthalmologically normal eyes over 5 days of repeated fluorophotometry.

Value is significantly (P < 0.05) greater than that on all other days.

Value is significantly (P < 0.05) lower than that on all other days.

Use of anterior chamber fluorophotometry in research allows noninvasive and objective determination of the breakdown and reestablishment of the blood-aqueous barrier. Proper assessment of the data is imperative to report accurate study findings, in particular when various treatments for uveitis are evaluated. The results of the present study demonstrated that there was a slight cumulative effect (mean, 92 ng/mL) of repeated daily fluorescein injections over 5 days as measured by anterior chamber fluorophotometry in clinically normal dogs. Although this increase was significant over time, it has been reported that a difference over time as high as 30% is typical in healthy eyes.6 In the present study, there was a mean increase of 22% over the 5-day study period, which was similar to the aforementioned typical variation. This finding is important to consider when comparing absolute fluorescein concentrations or increases from baseline in which a significant difference is found that is < 30%. Although such a difference may be significant, it should not be considered clinically important because it may be due to typical variation or fluorescein accumulation within the plasma or anterior chamber.

In humans, the elimination rate constant of fluorescein in the anterior chamber is not significantly different than the plasma terminal half-life.3 Excretion times are not known for dogs, and a small amount of fluorescein may still be present within the blood or other tissues > 24 hours and a small amount may accumulate as repeated daily IV fluorescein injections are performed. As a result, the anterior chamber equilibrates to increasing plasma concentrations that accrue over time. Plasma fluorescein could be measured prior to daily fluorescein injection to document an increasing plasma concentration; however, this was not performed in the present study. Regardless of plasma fluorescein concentration, there appears to be an increase in anterior chamber fluorescence over time with repeated daily fluorophotometry, which should be considered in future studies assessing blood-aqueous barrier breakdown. A significant finding of an increase > 30% should be the minimum increase considered relevant for study results. Anything less may be no different than typical variation or an increase over time, as was observed in the present study.

Although findings suggest that results are slightly affected when fluorophotometry values are evaluated as gross numbers or as a percentage increase compared with baseline, results from the other common method of reporting (increase in fluorescein concentration as a percentage increase in the treated vs contralateral eye) should not be affected because both eyes will equilibrate to the same plasma concentration. Indeed, the typical percentage variation between right and left eyes was < 5% on each day the dogs were evaluated. The problem with comparing treated with contralateral eyes for data reporting is that this method does not take into account a potential consensual response in which the contralateral eye is indeed affected by a treatment performed on the opposite eye. This type of response has been reported for numerous species and most recently was observed in dogs.17,19–22