Representative scan event chromatograms of canine plasma obtained 3 hours after oral administration of 4 mg of rosigliatzone/m2 and spiked with 500 ng of pioglitazone/mL. The upper and lower panels represent the chromatograms for the protonated pioglitazone and rosiglitazone ions, respectively, as in Figure 1. The unintegrated peak seen at 6.69 minutes represents the carbon 13 isotope of pioglitazone.

Calibration curve of rosiglitazone over a range of 1 to 1,000 ng/mL in canine plasma. 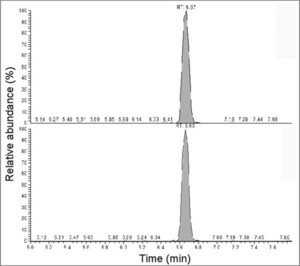 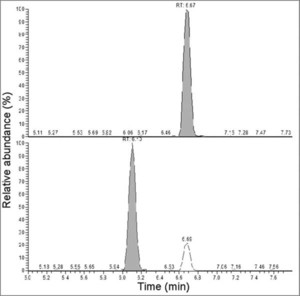 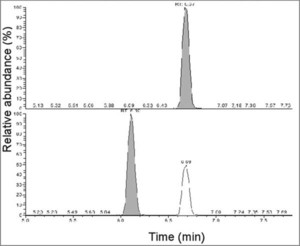 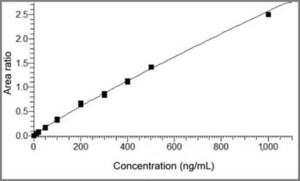 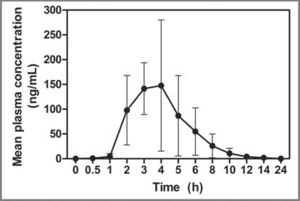 Procedures—High-performance liquid chromatography-tandem mass spectrometry was performed on canine plasma. The 3 dogs with cancer in the pharmacokinetic study were assessed via physical examination and clinicopathologic evaluation and considered otherwise healthy. Food was withheld for 12 hours, and dogs were administered a single dose (4 mg/m2) of rosiglitazone. Plasma was collected at various times, processed, and analyzed for rosiglitazone.

Procedures—High-performance liquid chromatography-tandem mass spectrometry was performed on canine plasma. The 3 dogs with cancer in the pharmacokinetic study were assessed via physical examination and clinicopathologic evaluation and considered otherwise healthy. Food was withheld for 12 hours, and dogs were administered a single dose (4 mg/m2) of rosiglitazone. Plasma was collected at various times, processed, and analyzed for rosiglitazone.

Rosiglitazone ((RS)-5-[4-(2-[methyl(pyridin-2-yl) amino]ethoxy)benzyl]thiazolidine-2,4-dione) is a synthetic PPAR7 agonist and an effective FDA-approved antidiabetic agent in humans.1 Peroxisome proliferator-activated receptor 7 is a member of the nuclear hormone receptor superfamily of ligand-activated transcription factors that plays a critical role in multiple cellular processes including energy metabolism and differentiation.2,3 Results of multiple studies indicate that PPARγ can function as a tumor suppressor.3–20 Consequently, ligands that behave as PPARγ agonists have been investigated as inhibitors of angiogenesis, for their ability to reduce tumor cell growth, and for their ability to regulate growth, differentiation, and gene regulation in a number of cancer cells and in murine preclinical models.3,7–19,21 Interestingly, synergistic antineoplastic activity between rosiglitazone and carboplatin, a platinum-based chemotherapeutic agent used extensively in both human and veterinary cancer clinics, has been detected via in vitro and in vivo murine studies, indicating that this combination may enhance tumor control.10,21 Although several pharmacokinetic studies22–27 have been described for rosiglitazone in humans, no pharmacokinetic studies have been described in dogs. Furthermore, no methods for determination of the concentration of rosiglitazone in canine plasma have been reported. Therefore, the purpose of the study reported here was to develop a simple extractionless method for detection of rosiglitazone in canine plasma and test the method in a pharmacokinetic study in dogs after oral administration of rosiglitazone.

Dogs—This study was approved by the Animal Care and Use Committee at the University of California-Davis Veterinary Medical Teaching Hospital. After the analytic method was validated, it was applied to a pharmacokinetic study of rosiglitazone in 3 client-owned, otherwise healthy, cancer-bearing dogs with informed consent. To be included in the study, dogs were required to have serum creatinine, alanine aminotranfersase, alkakine phosphatase, and total bilirubin concentrations or activities within reference ranges and be free of evidence of cardiac disease. A CBC, serum biochemical panel, and urinalysis were performed prior to administration of rosiglitazone. Dogs ranged from 7 to 10.4 years in age and from 21.1 to 27.7 kg in weight and included a spayed female Border Collie (dog 1), a castrated male terrier (dog 2), and a spayed female German Shepherd Dog (dog 3).

Rosiglitazone (4 mg/m2) was administered orally to dogs after food was withheld for 12 hours. Dogs readily swallowed the tablets. Dogs were hospitalized for 28 hours for observation and venous blood samples were collected into heparinized evacuated tubes from a jugular vein catheter prior to drug administration (time 0) and then at 0.5, 1, 2, 3, 4, 5, 6, 8, 10, 12, 14, and 24 hours following administration. The blood samples were centrifuged at 4,000 × g for 15 minutes at 22 ± 2°C, and the plasma was removed and stored in a cryogenic vial at −80°C until analysis. Plasma rosiglitazone concentrations were inspected on a semilogarithmic plot of concentration versus time for each dog. Pharmacokinetic parameters were evaluated from the plasma concentration-time profile.

All dogs were administered carboplatin IV 24 hours after initiation of the pharmacokinetic study. Dogs were discharged with instructions for owners to administer 4 mg of rosiglitazone/m2, PO once daily and a questionnaire for owners to monitor drug administration and variables such as water intake, appetite, urination, vomiting, energy level, attitude, exercise tolerance, fecal consistency, and frequency of defecation. Toxicoses were graded by the authors according to the Veterinary Cooperative Oncology Group criteria for adverse events.28 Dogs 1 and 3 received carboplatin at 300 mg/m2, IV. Dog 2 was administered carboplatin at 280 mg/m2 because of a grade III thrombocytopenia28 that occurred at a dose of 300 mg/m2 administered prior to enrollment in the study. A CBC was performed 7 to 14 days after carboplatin administration, and a CBC and a complete serum biochemical panel were performed 3 to 6 weeks after initiation of rosiglitazone administration. Dogs were followed for a minimum of 6 weeks with daily administration of rosiglitazone at 4 mg/m2 along with carboplatin administered IV every 3 weeks.

Apparatus, chemicals, and reagents—The HPLC systema was interfaced to a mass spectrometerb by use of an electrospray interface. Instrument control and data acquisition were performed by use of software.c A 10-μL aliquot of the sample was injected into the system by use of an autosampler.a The LC separation was performed on a carbon 18 columnd (2 μm; 100 × 2.1 mm) with a precolumn containing the same resin. Column temperature was maintained at 27 ± 2°C.

Preparation of samples—All quality controls, calibration curve, plasma, and patient samples were prepared as follows. The samples were mixed with equal volumes of internal standard with 9 parts acetonitrile to 1 part 1M acetic acid (vol:vol) to precipitate proteins. The samples were capped, shaken for 60 seconds at 22 ± 2°C, refrigerated at 4°C for 20 minutes, shaken at 22 ± 2°C for 20 seconds, and centrifugedk at 3,830 × g for 10 minutes at 4°C; then a 10-μL aliquot of the supernatant was injected into the system for analysis.

Accuracy and precision of calibration standards of a method for determining the concentration (ng/mL) of rosiglitazone in 6 canine plasma samples.

Intraday and interday accuracy and precision of a method for determining the concentration (ng/mL) of rosiglitazone in canine plasma samples.

Concentrations of rosiglitazone (10 ng/mL) in canine plasma at 20° and 4°C after various storage periods. Deviation is the percentage by which the concentration differs from the original concentration of 10 ng/mL.

Pharmacokinetic application—To determine whether this method would be useful in a clinical veterinary setting, the method was applied to analyze plasma samples obtained from cancer-bearing dogs that were free of other diseases, after administration of a single dose of rosiglitazone (4 mg/m2). No adverse effects were detected for any of the dogs at the time the drug was given or during the 24-hour postadministration observation period.

Rosiglitazone is an orally administered PPARγ agonist that may be of use as an antineoplastic agent in dogs. On the basis of preliminary data of in vitro and in vivo studies in mice, rosiglitazone may enhance the antitumor activity of carboplatin.

All 3 dogs in this study readily accepted and tolerated the orally administered rosiglitazone. Emesis of the tablets did not occur, and no adverse reactions were observed during the 24-hour observation period after the first dose. The combination of carboplatin and rosiglitazone was administered for 6 weeks (daily administration of rosiglitazone and IV administration of carboplatin every 3 weeks) with only mild adverse effects, and all dogs recovered from those without complications. Adverse events did not require hospitalization in any dog, and all dogs recovered without permanent long-term effects. These adverse events were similar to adverse events observed in patients that receive carbo-platin alone without rosiglitazone.29–33 Rosiglitazone appeared to be well tolerated after oral administration at 4 mg/m2 once daily for a minimum of 6 weeks in dogs.