Lateral radiographic view of the abdomen of a lamb at the first stage (mean ± SD age, 10 ± 2 weeks) immediately after suckling a test solution containing acetaminophen and barium sulfate. Notice that the barium sulfate in the test solution is located in the abomasum and not in the reticulum, which indicates complete closure of the reticular groove.

Lateral radiographic view of the abdomen of a lamb at the second stage (mean ± SD age, 16 ± 2 weeks) immediately after suckling a test solution. Notice that the barium sulfate in the test solution is located in the forestomachs, which indicates no or incomplete closure of the reticular groove.

Plasma acetaminophen concentration over time for lambs when suckling a test solution (solid line) and when tube fed the test solution (dashed line) at stage 1 (A), stage 2 (B), and stage 3 (C) of the study. Notice that the scale on the y-axis differs among panels. The onset of administration of the test solution is indicated (arrow) and is designated as time 0. In all 3 panels, a proposed cutoff value of 25 μg/mL is indicated (horizontal dotted line). *Value for this time point differs significantly (P < 0.05) from the value for time 0. †Within a time point, values differ significantly (P < 0.05) between treatments. 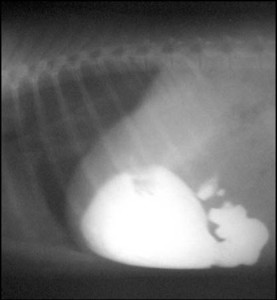 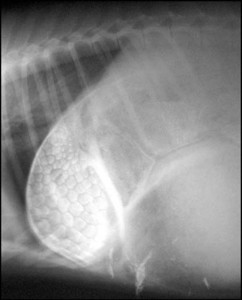 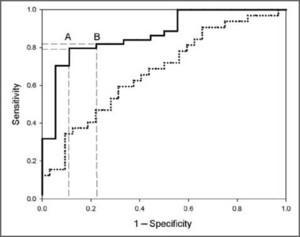 Objective—To assess the acetaminophen absorption test (APAT) for use in determining function of the reticular groove reflex in lambs.

Objective—To assess the acetaminophen absorption test (APAT) for use in determining function of the reticular groove reflex in lambs.

Animals—Twelve female Baluchi lambs were used for the study. Lambs were offspring of university-owned Baluchi ewes, and they were maintained in the flock to allow them to suckle from their dams. To train lambs to suckle from a nipple, animals were offered milk replacer from a nipple bottle once daily in the morning beginning approximately 1 week after birth. Lambs also had access to alfalfa hay at all times. All methods were in compliance with the guide for the care and use of agricultural animals in agricultural research and teaching.

For the first APAT of each stage, lambs were allowed to suckle a test solution consisting of 20 mL of tap water, acetaminophena (50 mg/kg), and 30% barium sulfate solution (10 mL/kg) from a nipple bottle. The second APAT was performed 1 week later, but with the same test solution administered via an orogastric tube inserted into the rumen of each lamb.

On the morning of each APAT, lambs were weighed, and a 16-gauge catheterb was aseptically inserted in a jugular vein. Blood samples were obtained immediately before administration of the test solution (time 0) and 30, 60, 90, 120, 150, and 180 minutes after administration. Collected blood samples were immediately transferred into 10-mL tubes that contained potassium oxalate; tubes were then centrifuged (1,800 X g for 15 minutes). Plasma was harvested and stored at −20°C until analyzed for plasma acetaminophen concentration by use of a spectrophotometric technique described elsewhere.7

Statistical analysis—Data were expressed as mean ± SD. Normal distribution of data was tested by determining the Shapiro-Wilk W and associated P value and by screening the normal probability plots. When necessary, values were logarithmically transformed to achieve a normal distribution. A repeated-measures ANOVA was used to detect differences in measured or calculated variables among stages and over time. A paired 2-tailed t test was used to determine differences between treatments. Bonferroni adjusted P values were used to assess differences within and among stages whenever the F test was significant. Values of P < 0.05 were considered significant. The ROC curves were plotted for AUCAcet and the Acet-T60. The AUC for the ROC curve was calculated for both of these curves by use of the trapezoidal rule. A statistical software programe was used for all analyses.

Mean ± SD values for Cmax and Tmax for 12 lambs administered acetaminophen (50 mg/kg) by suckling from a nipple bottle (suckled) or via an orogastric tube (tube fed) at 3 stages of development.

Within a row, value differs significantly (P < 0.05) from the value for tube fed.

Only 8 lambs had complete closure of the reticular groove and provided data for the analysis.

None of the lambs had complete closure of the reticular groove, but the data for all 12 lambs were included in the analysis.

n = Number of lambs that provided data for the analysis.

Mean ± SD values for AUCAcet for 12 lambs administered acetaminophen (50 mg/kg) by suckling from a nipple bottle (suckled) or via an orogastric tube (tube fed) at 3 stages of development.

Within a stage, value differs significantly (P < 0.05) from value for tube fed.

Results of ROC analysis that compared the suitability of Acet-T60 and AUCAcet to the criterion-referenced standard (ie, radiography) were determined (Figure 4). The AUC for the ROC curve for Acet-T60 was 0.70, and the AUC for the ROC curve for AUCAcet was 0.59. From these data, a cutoff value for Acet-T60 with optimal sensitivity and specificity was determined; the cutoff value was 24.9 μg/mL, which yielded a sensitivity of 0.80 and a specificity of 0.89.

The APAT has been validated as an alternative to other more invasive and costly methods for investigating emptying rates of the stomach in humans, horses, and other species and of the abomasum in calves.6–8 Because acetaminophen is readily absorbed in the duodenum but not in the stomach, the transit of this substance through the stomach is considered to be the rate-limiting step for its absorption and thus its appearance in plasma.5,12

In ruminants, pharmacokinetics of acetaminophen depend on abomasal motility as well as the reticular groove mechanism that considerably impacts the transit time of ingesta from the esophagus to the duodenum. Therefore, ODT was proposed as a more accurate term than abomasal emptying rate when describing results obtained by use of the APAT in ruminants.9 The importance of the effect of the reticular groove mechanism on ODT (as determined by results of the APAT) has been reported in a study9 in which tube-fed calves had significantly lower peak plasma acetaminophen concentrations, AUCs, and delayed Tmax for acetaminophen in plasma, compared with results for suckling calves. In monogastric species, there is little evidence that relevant amounts of acetaminophen are absorbed from the stomach,5 but to our knowledge, the absorption of acetaminophen from the ruminant forestomachs has not been investigated. For the study reported here, we assumed that acetaminophen would not be absorbed from the rumenoreticulum or abomasum; however, it would be possible that a larger fraction of acetaminophen would be absorbed from the forestomachs in tube-fed lambs than in lambs suckling the test solution because of the prolonged transit time of liquid ingesta through the forestomachs.

In contrast to results of a study7 in which investigators evaluated abomasal emptying rate in calves and found that Tmax for acetaminophen was the best proxy for assessing abomasal emptying, our results suggested that the Cmax for acetaminophen at a specific time is best suited for determining function of the reticular groove mechanism. This conclusion is in agreement with the observation that the delay in acetaminophen absorption in calves with disturbed reticular groove mechanism is largely attributable to prolonged retention in the ruminoreticulum rather than to decreased abomasal motility.10 Accordingly, the effect of a disturbed reticular groove reflex is more important on Cmax than on Tmax.11

To our knowledge, the safety of acetaminophen in ruminants after oral administration has not been directly investigated. Intravenous administration of acetaminophen to calves at dosages up to 50 mg/kg does not result in clinically appreciable adverse effects of hepatotoxicosis.17,18 In sheep, acetaminophen toxicosis has been associated with injectable formulations. The main pathologic finding is hepatopathy, which has been identified in sheep administered a single dose of acetaminophen (400 mg/kg), IV. Other changes in the serum biochemical profile of sheep with acetaminophen toxicosis are hypoglycemia, which is associated with interference of normal carbohydrate metabolism; a decrease in the albumin-to-globulin ratio; and hypercholesterolemia.17 Therefore, we believe that an APAT conducted by use of a dosage of 50 mg/kg in young ruminants does not pose any risk of toxic effects.