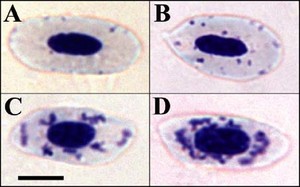 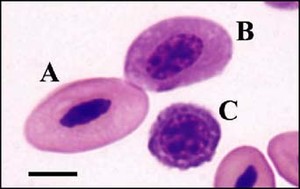 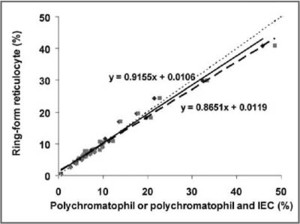 Anemia is a common clinicopathologic abnormality detected in avian species. It has been estimated that the frequency of anemia in birds, based on samples submitted for CBCs, is 12.7%.1 The initial diagnostic approach to anemia in both mammalian and avian patients is to first classify the anemia as regenerative or nonregenerative on the basis of the quantity of reticulocytes. For several mammalian species, reticulocyte counts are quantitatively assessed by use of automated analyzers. In contrast, avian erythrocyte regenerative responses are evaluated via semiquantitative assessment of polychromasia or estimation of reticulocyte percentages because the presence of nuclei in avian erythrocytes precludes the use of automated analyzers for quantitative reticulocyte counting.

Consequently, a problem associated with assessment of erythroid regeneration in birds is determining the best method for manually counting avian reticulocytes. There is general agreement that supravital stains such as NMB can be used to identify avian reticulocytes. However, investigators have reported2–4 detection of basophilic reticulum in a high percentage of avian erythrocytes following supravital staining; counting all cells containing any visible reticulum has yielded high reticulocyte percentages (some > 90%) in both healthy birds and birds with anemia induced via nutritional alterations. Clearly, more specific morphologic criteria to define reticulocytes are needed. Two commonly used classification schemes recommend counting either all cells with > 4 or > 5 distinct aggregates of reticulum; another scheme recommends counting all cells with a complete ring of reticulum that encircles the nucleus.5–7 This latter scheme also has been recommended in several current clinical textbooks, but as yet, a consensus on avian reticulocyte classification has not been reached.4,8,9 In addition, to the authors' knowledge, a quantitative correlation between polychromatophils and various reticulocyte morphologic types in avian species has not been published.

Comparison of reticulocyte-staining methods and evaluation of sample storage—A single 4-mL sample of whole blood was collected (immediately prior to euthanasiaa) from an injured red-tailed hawk that was brought to the veterinary medical hospital at the University of California, Davis; EDTA was used as the anticoagulant for the sample. The whole blood sample was diluted with NMB stainb (1:1, 1:2, 1:3, and 1:4 [blood to stain]). Whole blood volumes of 10 to 20 μL were placed into plastic bullet tubes, and appropriate volumes of stain were added. The tubes were capped, mixed by repeated inversion, and allowed to incubate at room temperature (approx 22°C) for 5, 10, 30, or 60 minutes. Repeated inversion of the tubes was again performed before a direct smear of the contents of each was made. Sixteen smears (1 from each of the 4 diluted samples that underwent each incubation period) were evaluated by 1 observer (MPS). By use of the aforementioned reticulocyte classification scheme, the percentage of each reticulocyte type among 1,000 RBCs examined on each smear was determined.

A dilution of 1:3 (blood to stain) and a 10-minute incubation time were used to evaluate reticulocyte staining after 4, 12, 24, and 48 hours of storage of the EDTA whole blood sample at 4°C. Staining quality was subjectively evaluated for all smears, and the percentage of each reticulocyte type among 1,000 RBCs examined on each smear was determined. Degenerated erythrocytes, defined as cells with fragmented nuclear chromatin or deeply basophilic cytoplasm (or both), were counted separately when observed.

Comparison of polychromatophil and reticulocyte percentages—Samples of blood (anticoagulated with EDTA) from 31 birds that were examined at the veterinary medical teaching hospital were randomly selected from all avian blood samples submitted to the clinical pathology laboratory for routine CBCs. This group of birds included Psittaciformes (n = 16), Anseriformes (3), Falconiformes (7), and Strigiformes (5). Wright-Giemsa–stained smearsc were prepared from each blood sample as part of the CBC. An aliquot of whole blood (10 to 20 μL) was taken from each sample and added to NMB stain in a 1:3 dilution; samples were incubated at room temperature for 10 minutes, and a direct smear was prepared. Two observers (JLJ and MPS [observers 1 and 2]) each performed differential counts on 1,000 cells on the Wright-Giemsa– and the NMB-stained smears. Normochromic erythrocytes, polychromatophilic erythrocytes, and IECs (defined as round erythroid cells with basophilic cytoplasm) were counted in the Wright-Giemsa–stained smears (Figure 2). For comparison of different combinations of cells to reticulocytes, an adjusted polychromatophil percentage was calculated (ie, IECs were excluded from polychromatophil and total RBC counts) to express polychromatophils as a percentage of the combined number of polychromatophils and mature RBCs. A combined percentage of polychromatophils and IECs, which expressed all immature erythrocytes as a percentage of all erythroid cells, was also calculated. The 4 reticulocyte types (punctate-1, punctate-2, aggregate, and ring-form) were each counted in the NMB–stained smears and expressed as percentages. A combined percentage of aggregate and ringform reticulocytes was also calculated.

Generation of a reference interval for polychromatophils in healthy psittacines—Clinic records from January 2003 to January 2007 were searched electronically for psittacines that underwent a routine wellness examination. A bird was considered healthy if no clinical abnormalities or other evidence of disease was detected via physical examination and if results of a CBC and plasma biochemical analyses were within published reference intervals for healthy psittacines.1 Birds were excluded if they did not meet all of those criteria or if they were < 6 months old. Differential counts on 1,000 RBCs were performed on archived Wright-Giemsa– stained smears of blood from the birds that met the criteria for inclusion. Percentages of polychromatophils and IECs were recorded for each smear. Absolute polychromatophil counts were calculated by multiplying the polychromatophil percentage by the total RBC count (manual leukocyte counts were subtracted from the total nucleated cell count obtained from the hematology analyzerd to obtain the total RBC count).

Comparison of reticulocyte-staining methods and evaluation of storage—Staining quality of the 4 smears made from blood samples that were diluted 1:1 with NMB stain and incubated at room temperature for 5, 10, 30, or 60 minutes was unacceptable for differential counting because the reticulum was often faintly stained, thereby precluding differentiation of various reticulocyte types. Staining quality of the remaining 12 smears was assessed as acceptable for differential counting. The optimal staining protocol selected for use in subsequent analyses was a dilution of 1:3 (blood to NMB stain) and an incubation time of 10 minutes.

Direct smears were prepared from samples that were stained with NMB stain in a 1:3 dilution (blood to stain) and incubated at room temperature (approx 22°C) for 10 minutes. Wright-Giemsa-stained smears were also available from routine CBCs performed for each bird. Two observers each performed differential counts on 1,000 cells on the Wright-Giemsa- and the NMB-stained smears.

Calculated by exclusion of IECs from counts.

A separate category of IECs was created to include erythroid cells with a morphologic appearance that was more immature than that of polychromatophils; these cells are considered analogous to nucleated RBCs in mammalian blood. On the basis of findings in supravitally stained avian bone marrow,7 the staining pattern of IECs should be similar to that of ring-form reticulocytes, and we considered the potential impact of inclusion or exclusion of these cells in our study via comparisons with an adjusted polychromatophil percentage (with exclusion of IECs) and with the combined percentage of polychromatophils and IECs. Both polychromatophil categories quantitatively correlated strongly with ring-form reticulocytes, with only a slight decrease in correlation strength when IECs were included. Immature erythroid cells comprised 0.0% to 5.0% of all RBCs in the samples included in our study, which was a wide range of values. The practical implication of this finding is that inclusion or exclusion of IECs in a polychromatophil count appears to have a minimal, and likely clinically unimportant, effect on the percentage of ringform reticulocytes.

Lack of uniformity in counting and reporting of avian reticulocytes has been identified as a likely cause of variation in published reticulocyte counts in chickens.10 The data from the present study supported this theory. In the 1950s and 1960s, reported values for reticulocytes in clinically normal humans also varied markedly, and several authors attributed this to a lack of uniform criteria for identification of reticulocytes.13 Standardization of a uniform reticulocyte-counting technique should reduce variation in proposed reference intervals in avian species, as has been the case for mammalian species.

Supravital staining of avian bone marrow has revealed the presence of a perinuclear ring of reticulum in cells in the early stages of erythroid cell development.7 Avian erythrocytes do not extrude their nucleus during maturation as do mammalian erythrocytes, but a maturation stage similar to that of a late metarubricyte was believed to be indicated by dissolution of the perinuclear ring of reticulum into a diffuse distribution of granular reticulum throughout the cytoplasm.7 The results of our study suggest that this transformation from a perinuclear to a diffuse distribution of reticulum is more likely to be analogous to the maturation of a polychromatophil to a mature erythrocyte because the percentage of ring-form reticulocytes (ie, those with perinuclear granulation) quantitatively correlated much more strongly with the percentage of polychromatophils than did the percentage of aggregate reticulocytes (ie, those with diffusely distributed granulation) or the combined percentage of aggregate and ring-form reticulocytes.

In the present study, the optimal avian reticulocyte staining protocol involved a 1:3 dilution of whole blood to NMB stain with an incubation time of 10 minutes. Ratios of whole blood to supravital stain ranging from 1:1 to 1:3 have been used previously for staining of blood from both avian and mammalian species.2,8,14 Both the type and concentration of the supravital stain used must be taken into account when comparing staining methods. The 1:3 dilution was selected as optimal in our study because cytoplasmic staining was better defined at this dilution than at lower dilutions.

Refrigerated storage of whole blood for as long as 24 hours minimally affected reticulocyte staining and counting in our study, although there was a low percentage (0.6%) of erythrocytes that were degenerated in appearance and could not be included in the differential count. After 48 hours of refrigerated storage, many cells were degenerated and deeply stained, and reticulocyte counting could not be performed. Therefore, our recommendation is to store avian whole blood in a refrigerator for no more than 24 hours prior to reticulocyte staining and counting.