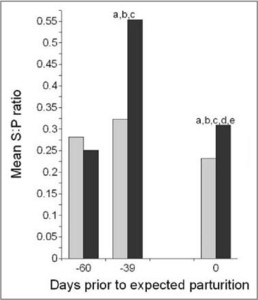 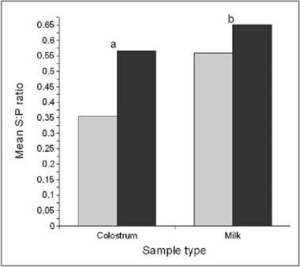 Mycoplasma bovis, a bovine bacterial pathogen, has been implicated as a cause of contagious mastitis, respiratory tract disease, arthritis, otitis media and interna, and a host of other disease processes in cattle. It was first identified as a contagious bovine mastitis pathogen in 1961,1 and much effort has been made toward establishing proper diagnostic, treatment, prevention, and control measures.

Mycoplasma bovis–associated diseases are costly to beef and dairy production systems worldwide. Cattle producers incur costs to treat infected animals as well as replace those culled from the production facility. Dairy farmers may incur additional costs in the form of decreased premiums or penalties in bulk tank sales.

Like other Mycoplasma spp, M bovis lacks a typical bacterial cell wall.2 Traditional bacteriocidal antimicrobials, such as ceftiofur and penicillin G procaine, which inhibit bacterial cell wall synthesis, have little effect against M bovis. Therefore, when faced with treating an M bovis – associated respiratory tract disease in their cattle, producers may perceive that a treatment failure has occurred if cattle are treated with such antimicrobials without results of bacteriologic culture. Vaccinating dams against respiratory tract pathogens, such as infectious bovine rhinotracheitis virus, parainfluenza 3 virus, bovine respiratory syncytial virus, bovine viral diarrhea virus, Mannhaemia hemolytica, and Pasteurella multocida, prior to calving has resulted in increases in specific IgG concentrations against these pathogens, which are then passively transferred to calves via colostrum.

The purpose of the controlled trial reported here was to determine whether vaccinating cows during late gestation against M bovis would result in adequate concentrations of M bovis–specific IgG1 in serum, colostrum, and milk.

Cattle and study design—Seventy-eight Holstein cows with confirmed expected parturition dates were used. The study population originated from and was housed at the University of Missouri-Columbia Foremost Dairy. Cows had ceased lactation 0 to 6 days prior to enrollment. Upon initial enrollment, a coin flip was used to allocate the initial cow into its respective study group with binary allocation into the 2 study groups that followed. Cows assigned to the vaccinated group were given 2 mL of M bovis bacterina SC in the neck area on the right side. Simultaneously, a 10-mL blood sample was collected aseptically via the coccygeal vein. Cows assigned to the control group received no vaccination. A blood sample was collected from these cows in the same fashion. Three weeks later, a booster vaccination of the same product was given to the vaccinated group and a second blood sample was obtained in the same fashion. A blood sample was obtained from the control cows at the same time and in the same fashion. Cows were monitored for impending parturition by farm management personnel. At the time of calving, a third blood sample was obtained. All blood samples were centrifuged, and the serum sample was decanted into a 5-mL serum collection tube. Cow number, sample number, and collection date were used to identify samples. Samples were frozen at −10°C until serologic analysis was performed. At calving, a 10-mL composite sample of colostrum was obtained from each cow in an aseptic fashion and collected into a 10-mL tube. Colostrum samples were frozen at −10°C until serologic analysis was performed. A composite milk sample was collected in a similar way at 7 to 13 days of lactation.

where OD450 is optical density measured at a wavelength of 450 nm.

Differences were considered significant at P < 0.05. All statistical analyses were performed by use of specialized software.b

Colostrum—Colostrum samples from 28 control cows and 26 vaccinated cows were available for analysis. Colostrum samples from 24 of the cows available from the serology study were not available for analysis. These samples were not collected at the time of parturition or appropriate aliquots were not obtained from collected colostrum before the samples were frozen. Mean colostrum IgG1 S:P ratio values were lower in the control group (Figure 2) . Mean S:P ratio values between the control and vaccinated groups were significantly (P = 0.011) different (0.3546 ± 0.050 and 0.5661 ± 0.087, respectively).

Milk—Milk samples from 32 control cows and 27 vaccinated cows were available for analysis. Milk samples from 19 of the cows available from the serology study were not available for analysis. These samples were not collected at the appropriate time according to the study protocol of 7 to 13 days of lactation or these cows had been culled soon after parturition. Mean milk IgG1 S:P ratio values were lower in the control group (Figure 2). However, mean S:P ratio values were not significantly (P = 0.322) different between the control and vaccinated groups (0.5585 ± 0.047 and 0.6511 ± 0.079, respectively). A significant difference in mean S:P ratio was found between colostrum and milk of cows in the control group (P = 0.013) but not in cows in the vaccinated group (P = 0.437).

NS = Not significant. NA = Not applicable.

In the present study, on the basis of herd records, cases of Mycoplasma spp mastitis were not recorded and results of random bulk tank bacteriologic cultures for Mycoplasma spp were negative. To the authors' knowledge, cows enrolled in this controlled trial had never received a prior M bovis bacterin. As expected, all cows entering this trial had statistically similar anti–M bovis S:P ratios. At the time of booster vaccination, there was a substantially larger mean serum S:P ratio in the vaccinated group versus the control group, and this continued though parturition. There was a noticeable decrease in mean serum S:P ratios at time of calving. If this variable is used to gauge the overall immune status of the periparturient dams, these findings are consistent with other studies.5–7 These alterations of immune status in dairy cows begin approximately 3 weeks prior to calving and continue until 3 weeks after calving.8 Serum IgG1 concentrations typically decrease at time of parturition.7,9 Although the present study only evaluated mean concentrations of anti–M bovis IgG1, there was a difference between mean IgG1 concentrations at calving versus enrollment 60 days prior to parturition in both groups, with vaccinated cows having higher concentrations at calving.

Colostrogenesis begins about 15 days prior to parturition. This event is marked by active and selective transport of immunoglobulin, generally of the IgG1 subclass, into the mammary gland.10,11 Colostral quality and subsequent calf health can be influenced by vaccination status of the dam, exposure of the dam to infectious diseases, production of protective antibodies, and antibody transport into the mammary gland.8 In the present study, vaccinated cows produced colostrum higher in anti–M bovis IgG1 concentration than did their nonvaccinated herdmates. Again, the purpose of this study was not to determine the effective concentration of colostrum IgG1 needed to protect calves against M bovis. Calves have not been challenged with M bovis exposure to determine if any protection is provided via colostrum of vaccinated dams.