Photograph of the articular surface of the distal condyle of a 3-D model of an equine third metacarpal bone in which six 1-cm2 areas (hatched regions) were cut to a depth of 1 cm to demarcate specific ROIs prior to scanning via CT. Regions that matched the size and position of these ROIs were subsequently generated on models of intact and dissected third metacarpal bones. 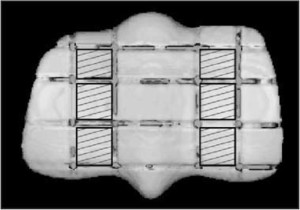 Conclusions and Clinical Relevance—Cutting subchondral bone to demarcate specific ROIs prior to CT imaging significantly lowered mean bone density as measured via QCT and thus introduced substantial artifacts. These findings have direct implications on techniques for CT modeling of equine subchondral bone in the characterization of joint diseases in horses.

Conclusions and Clinical Relevance—Cutting subchondral bone to demarcate specific ROIs prior to CT imaging significantly lowered mean bone density as measured via QCT and thus introduced substantial artifacts. These findings have direct implications on techniques for CT modeling of equine subchondral bone in the characterization of joint diseases in horses.

Quantitative CT has been used extensively to measure mean density of whole bones1–4 and mean density of specific ROIs5–7 in bones of humans and other animals. Some investigators have cut bone specimens prior to scanning via CT to improve precision when outlining ROIs.8 By cutting articular or cortical surfaces prior to scanning, the need for image registration (the process of transforming different sets of data into 1 coordinate image) is also reduced. However, a potential problem with this method is that the mean density of cut bones as determined by use of QCT is typically lower than that of intact bones because of effects of edges at the interface between these ROIs and air. With newer, more powerful computer applications, the locations of ROIs can be precisely positioned on computer-generated models of bones after CT scanning because imaging software allows for measurements in nanometers. In addition, 3-D projections of surfaces of subchondral bone can now be created, and ROIs in subchondral bone, which were not definable with older computer programs, can now be evaluated.

The objective of the study reported here was to evaluate whether cutting equine subchondral bone to demarcate specific ROIs influences the mean density for that bone as measured via QCT. We believed that mean densities of bone as determined via QCT would differ for equine subchondral bone depending on the means by which the bone was prepared for scanning. Specifically, we hypothesized that bones in which ROIs had been cut prior to scanning would have significantly lower mean densities than bones into which ROIs had not been cut.

Sample population—One metacarpophalangeal joint was harvested from each of 2 equine cadavers at necropsy. The forelimb was severed at the mid-diaphysis of the third metacarpal bone and remained intact until disarticulation of the metacarpophlangeal joint. Limbs were processed immediately after removal and were stored at approximately 4°C when not being used. Horses had been euthanatized with IV pentobarbital as part of an unrelated study that had been approved by an animal care and use committee.

Experimental procedures—The distal portion of each third metacarpal bone was scanned via CT in 3 conditions. A spiral CT scannera was used at the same settings for all procedures (ie, 512 × 512-pixel matrix, 140 kVp, and 18-cm field of view; series of 1.5-mm transverse contiguous images). To calibrate bone density, a TCP density-equivalent phantomb was placed in the field of view for the last slice of the CT scan.

Finally, six 1-cm2 areas (ie, ROIs) were cut into the distal condylar surfaces of each dissected third metacarpal bone to a depth of 1 cm by use of a precision cutting system.c The prepared third metacarpal bone (designated as cut-dissected bone) was scanned in approximately the same position as were the other 2 bone preparations. Overall, assessment of the 3 bone preparations from each limb was completed within 72 hours after euthanasia of horses.

Creation of 3-D models—Three-dimensional modeling of data obtained from CT scans of the 2 third metacarpal bones in each of the 3 conditions was achieved by use of a computer software program.d The software is specifically designed to analyze curved or nonlinear surfaces. It detects the first pixel of the 3-D model, measures pixel density values to a user-specified depth, and utilizes a standard 3-D shaded mask3 to create the volume for analysis. A pixel threshold of 500 Hounsfield units4 was used to isolate the distal portion of the third metacarpal bone for transformation into a 3-D model. The 6 ROIs were positioned on the distal condylar surface of the model of each cut-dissected bone according to the visible bony edge of each cut ROI (Figure 1) . Coordinates were determined for each corner of each ROI in relation to the medial, dorsal, and palmar edges of the bone. The ROIs were then reproduced on the 3-D models created from CT scans of corresponding dissected and intact bones.

The mean density for each ROI was measured in Hounsfeld units to a depth of 1 cm from the condylar surface. Density values were calibrated by use of a TCP density phantom and a simple linear regression model for each set of scan images. Additionally, area of each ROI was recorded. Mean densities and mean areas for each bone preparation were compared by use of a Wilcoxon signed rank test with statistical softwaree; values of P < 0.05 were considered significant.

Mean ROI area and bone density values obtained from CT scans of the distal portion of 1 third metacarpal bone from each of 2 horses in 3 conditions: intact, dissected, and cut-dissected to demarcate specific ROIs.

Mean ROI areas were not significantly different among preparations.

Cutting bone specimens to demarcate ROIs is desirable because it facilitates positioning of ROIs on 3-D models of bones and improves measurement precision. However, there is some concern that the averaging of densities at the edges of these ROIs may influence measurements of bone density as determined via QCT. Good correlations between QCT densities for cut cortical bone and apparent densities for ash in humans have been reported,8 but the effect that cutting had on the measured QCT bone density in that study was not evaluated. To our knowledge, ex vivo 3-D modeling of the density of subchondral bone has not been reported in humans or other animals but is becoming more desirable because of ease of data acquisition and noninvasiveness of measurements.

Mean ROI densities of intact and dissected bone were not significantly different in the study reported here. However, soft tissue structures can influence QCT measurements of bone densities of human vertebrae,2 and this effect is primarily attributable to adipose tissue. In contrast, adipose tissue is typically sparse around the metacarpophalangeal joint in horses, which may explain the lack of significant differences detected between mean densities of dissected and intact bone in our study. The lack of significant differences may also be explained by the fact that only 2 bones were evaluated in the present study and that a post hoc power calculation indicated that the power to detect a significant difference was low (β = 0.45).

Areas of the ROIs were measured to verify that there was no difference in mean area so that user precision could be validated and user error as a source of error in mean density values could be monitored. Because ROI area did not vary significantly, we believed that user error did not contribute substantially to measured differences in bone density.

Additional studies with larger sample sizes need to be performed before one can be confident that QCT measurements of severed distal portions of the third metacarpal bone are equivalent to QCT measurements of entire metacarpophalangeal joints in horses. However, performing larger studies may be difficult because collaborative research and international shipping challenges often limit specimen acquisition to fresh-frozen distal portions of equine third metacarpal bones rather than intact metacarpophalangeal joints. Although a larger sample size is needed to definitively determine the effect of cutting ROIs into bone on mean bone density as determined by QCT, the differences detected between cut-dissected versus other preparations of subchondral bone in our study were significant, and we highly recommend subchondral bone not be cut prior to CT scanning for the purpose of creating 3-D models. Indeed, cutting ROIs into subchondral bone may introduce artifacts into QCT measurements of bone density.