Western blot of hyaluronan in synovial fluid from stifle joints of dogs in each group in this study. Representative lanes from each group have been combined from multiple blots. A band is evident at approximately 35 kd in CrCLt, GR, and MR lanes that was not evident in any lanes for the other groups. Numbers represent values in kilodaltons. See Figure 1 for remainder of key. 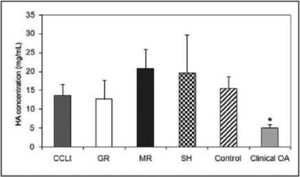 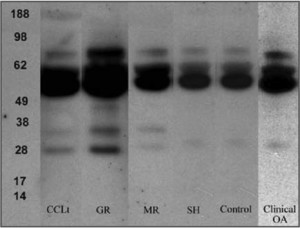 Objective—To determine the quantity (concentration) and quality (molecular weight) of synovial fluid hyaluronan with respect to presence and severity of osteoarthritis in stifle joints of dogs.

Procedures—Research dogs underwent arthroscopic surgery in 1 stifle joint to induce osteoarthritis via CrCL transection (CrCLt; n = 5 stifle joints), femoral condylar articular cartilage groove creation (GR; 6), or meniscal release (MR; 5); 5 had sham surgery (SH) performed. Contralateral stifle joints (n = 21) were used as unoperated control joints. Synovial fluid was obtained from research dogs at time 0 and 12 weeks after surgery and from clinically affected dogs prior to surgery. All dogs were assessed for lameness, radiographic signs of osteoarthritis, and pathologic findings on arthroscopy as well as for quantity and quality of hyaluronan.

Conclusions and Clinical Relevance—Synovial fluid hyaluronan quantity and quality were altered in stifle joints of dogs with osteoarthritis, compared with control stifle joints. A specific hyaluronan protein fragment may be associated with early pathologic changes in affected joints.

Objective—To determine the quantity (concentration) and quality (molecular weight) of synovial fluid hyaluronan with respect to presence and severity of osteoarthritis in stifle joints of dogs.

Procedures—Research dogs underwent arthroscopic surgery in 1 stifle joint to induce osteoarthritis via CrCL transection (CrCLt; n = 5 stifle joints), femoral condylar articular cartilage groove creation (GR; 6), or meniscal release (MR; 5); 5 had sham surgery (SH) performed. Contralateral stifle joints (n = 21) were used as unoperated control joints. Synovial fluid was obtained from research dogs at time 0 and 12 weeks after surgery and from clinically affected dogs prior to surgery. All dogs were assessed for lameness, radiographic signs of osteoarthritis, and pathologic findings on arthroscopy as well as for quantity and quality of hyaluronan.

Conclusions and Clinical Relevance—Synovial fluid hyaluronan quantity and quality were altered in stifle joints of dogs with osteoarthritis, compared with control stifle joints. A specific hyaluronan protein fragment may be associated with early pathologic changes in affected joints.

Osteoarthritis is an important and costly problem in dogs, horses, and humans. In dogs, it is suggested that 20% of middle-aged and 90% of older dogs have osteoarthritis in 1 or more joints.1 The cause of osteoarthritis is unknown, but it inevitably results in degradation of articular cartilage, leading to pain, inflammation, and loss of motion in the joint.1 Because osteoarthritis is a widespread problem, veterinarians need a precise way to diagnose the disease early and accurately. Osteoarthritis is commonly diagnosed in the late and irreversible stages, where treatment can only be expected to decrease pain and slow progression of disease in a palliative manner.2 By developing methods for earlier diagnosis of osteoarthritis, prevention or even curative treatment strategies to manage the disease become more realistic.

Biomarkers are being investigated intensively for early diagnosis, identification of patients at increased risk, and monitoring therapeutic strategies in osteoarthritis.3 As such, a scheme for standardized classification of biomarkers was put forth by the Osteoarthritis Biomarker Network to categorize biomarkers under development into one or more of the following areas: burden of disease, investigative, prognostic, efficacy of intervention, and diagnostic.3 In our laboratory, we are particularly interested in identification and validation of biomarkers that can detect early stages of osteoarthritis to provide accurate diagnostic and prognostic information prior to onset of clinical disease. The study reported here focuses on a potential marker for diagnosis and staging of osteoarthritis in synovial fluid. Synovial fluid was chosen for this research as it is known to have sensitive and rapid responses to joint insult and injury, and these changes are primarily joint specific, which may be especially important in veterinary medicine. Hyaluronan was examined in this way because it is a major functional constituent of synovial fluid and articular cartilage, and it undergoes quantitative and qualitative changes in joint disease.4,5

Procedures—Assessment of limb function was performed by 2 investigators blinded to dog number, group, and clinical signs by use of a categoric9 and visual analogue scale for lameness. All dogs were assessed for lameness the day before surgery, and research dogs were assessed at 4, 8, and 12 weeks after surgery.

All dogs were premedicated, anesthetized, and prepared for aseptic surgery of 1 stifle joint. Prior to surgery, arthrocentesis of the stifle joint intended to receive surgery was performed. Synovial fluid was aspirated from each stifle joint by use of a 1.5-in 18-gauge needle and syringe, such that all synovial fluid that could readily be aspirated with redirection of the needle was obtained. The synovial fluid was then divided into aliquots and frozen at −70°C until needed.

Arthroscopic evaluation of stifle joints was performed in standardized fashion. All articular surfaces of the patella, femur, and tibia were examined and scored with respect to degree of articular cartilage damage by use of the International Cartilage Repair Society cartilage injury classification system.12 Meniscal pathologic change was also arthroscopically assessed and described in terms of nature, extent, and location.

Twelve weeks after surgery, research dogs were euthanatized by IV administration of an overdose of phenytoin and pentobarbital. Radiography and aseptic arthrocentesis were performed on both stifle joints of each dog as already described.

To qualitatively assess hyaluronan content in synovial fluid of dogs in this study, western blot gelsb were used. Samples were then reduced by use of sample bufferc and 2-mercaptoethanol and heated at 70°C for 5 minutes. Samples were loaded into the wells and connected to a power supplyd at 125 V and 70 mA for 90 minutes. Transfer was then completed in a unite at 18 V and 110 mA for 130 minutes. Blocking was performed after that for 30 minutes with 30 mL of Tris-buffered saline (0.9% NaCl) solution containing 0.05% Tween and 1.5 g of nonfat dry milk. Then 30 μL of primary antibody (mouse anti-rat proteoglycan hyaluronan IgG monoclonal) was added, and the blot was incubated at 4°C overnight. The antibody was obtained from the Developmental Studies Hybridoma Bank developed under auspices of the National Institute of Child Health and Human Development and maintained by The University of Iowa. The following day, the blot was washed 3 times with the Tris-buffered saline solution containing Tween and then incubated on a shaker at 24°C with cell-signaling anti-mouse IgG horseradish peroxidase–linked secondary antibody. After 1 hour, the blot was washed 3 times with the Tris-buffered saline solution containing Tween. Blots were incubated with enhanced chemiluminescence solution containing the cell-signaling reagentf and peroxide to produce a signal. Bands were detected by use of hyperfilm-enhanced chemiluminescence film (8 × 10 inch) at 30 seconds and 1 minute and developed by use of a commercial film processor. Once films were developed, bands were labeled and analyzed for size and distribution of bands.

Data analysis—To test our hypothesis, data from all assessments were compared for significant (P < 0.05) differences by use of an ANOVA or rank sum tests with post hoc analyses. Correlation between lameness assessment systems was determined by use of Spearman rank order correlation analysis.

We believed it was important to examine the quality (ie, molecular weight) of the hyaluronan in this study because these changes may be more sensitive to early pathologic changes in a joint in osteoarthritis and therefore more useful as a clinical biomarker for diagnosis of disease than previously determined.8 The structure of hyaluronan is altered during the development of osteoarthritis. The molecular weight of hyaluronan in normal human synovial fluid is 7 × 106 and decreases to 3 to 5 × 106 in degenerative joints, corresponding to structural changes in the synovial fluid.14 In our study, synovial fluid from normal and affected stifle joints had multiple bands found on western blots assessing hyaluronan concentrations at various molecular weights. Bands at 70, 60, 50, and 28 kd were consistently observed in all groups. These data are consistent with those reported in another study13 that found hyaluronan bands at 70 kd and then after purification cleaved into 50- and 27-kd bands. As part of our method for western blot analysis, synovial fluid samples were reduced for primary antibody to bindings. Sample reduction leads to the development of protein fragments (ie, lower molecular weight hyaluronan). While fragmentation may occur ex vivo as part of sample processing, in vivo fragmentation of hyaluronan is also reported to occur as a result of pathologic changes in the joint.15 This fragmentation may be the result of alterations in synthesis, posttranslational modifications, degradation, or any combination of these.15 Importantly, in our study, 1 fragmentation band was found to be consistently different among synovial fluid samples of control stifle joints and stifle joints with surgically induced osteoarthritis. This band at 35 kd may represent a form of the hyaluronan protein that is a result of early pathologic processes associated with initiation of osteoarthritis. If correct, this protein could serve as a valuable biomarker for diagnosis of osteoarthritis. We are currently pursuing further characterization of this protein for future prospective assessment of its importance as an osteoarthritis biomarker.

There are certainly some important limitations of this study that should be considered when interpreting the data. One such limitation was the duration of study with respect to the surgically induced osteoarthritis. Although the data suggest that the 12-week endpoint was adequate for early changes associated with osteoarthritis to be evident on the basis of functional, radiographic, arthroscopic, and synovial fluid changes in dogs, it may not have been long enough to allow for differences in hyaluronan quantity to mimic those of clinical patients admitted for treatment of osteoarthritis of the stifle joint secondary to CrCL disease. Therefore, we cannot be certain that any of these surgically induced forms of osteoarthritis truly mimic the early stages of secondary osteoarthritis in the stifle joints of clinically affected dogs or which type of surgical insult may be most appropriate for study of osteoarthritis biomarkers in dogs. Lastly, the number of subjects per group was not high enough for us to consistently reach powers > 0.8 in our statistical analyses. Therefore, data reported that revealed no significant differences among groups in this study must be interpreted with caution.