Mean ± SD MIC for cefazolin 5.5% alone (Cef), tobramycin 0.3% (Tob) alone, or the estimated value for each medication when used as part of a drug combination (Cef-DC and Tob-DC, respectively) and added to cultures of Staphylococcus aureus (A), β-hemolytic Streptococcus spp (B), and Pseudomonas aeruginosa (C). The drug combination consisted of equal volumes of natamycin 3.33%, tobramycin 0.3%, cefazolin 5.5%, and equine serum. Notice that the scale of the y-axis varies among pathogens. *Value differs significantly (P < 0.001) from the value for tobramycin alone. 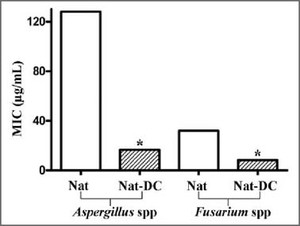 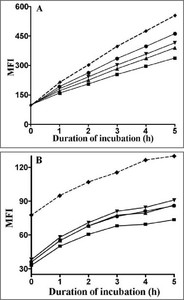 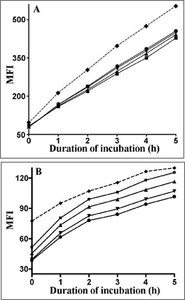 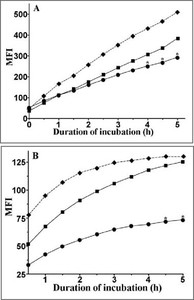 Objective—To evaluate the in vitro efficacy of an ophthalmic drug combination against common corneal pathogens of horses.

Conclusions and Clinical Relevance—Drug combinations have the attractive potential of minimizing the time, stress, and fatigue associated with topical treatment regimens consisting of multiple drugs used separately for horses with keratitis.

Objective—To evaluate the in vitro efficacy of an ophthalmic drug combination against common corneal pathogens of horses.

Conclusions and Clinical Relevance—Drug combinations have the attractive potential of minimizing the time, stress, and fatigue associated with topical treatment regimens consisting of multiple drugs used separately for horses with keratitis.

Ulcerative keratitis is a prevalent vision-threatening disease in horses.1 Thirty-five percent of all horses examined at the Ophthalmology Service of the University of Florida Veterinary Medical Center between January 1987 and October 2002 had ulcerative keratitis.2 Microbial culture and cytologic examination of corneal specimens commonly identify causative bacteria or fungal agents.1,3 Horses with moderate to severe ulcerative keratitis require antimicrobial treatment every 2 to 6 hours, with a gradual reduction in frequency of treatment as healing progresses.

Corneal melting, which is characterized by a gelatinous or soft appearance of the cornea, is often associated with infected corneal ulcers. The gelatinous appearance results from enzymatic destruction of the corneal ECM proteins.3 Uncontrolled corneal melting can progress to corneal perforation in as little as 24 hours4 and is therefore considered an emergency. Collagenases and gelatinases are 2 classes of proteinases whose excess is implicated as the cause of this ECM destruction in horses.2 They are derived exogenously from infective microbes and endogenously from resident corneal cells (keratocytes) and leukocytes that travel in the tear film.2,4 Collagenases degrade intact collagen fibrils, which are the principal support structure of the cornea.5 Gelatinases degrade denatured collagen6; therefore, they may exacerbate melting after ECM injury is initiated.4 The mainstay of antimelting treatment at our facility is allologous serum because of its broad-spectrum anticollagenase and antigelatinase activity.4 The bioavailability of serum, similar to that of other nonenhanced ophthalmic medications, is presumed to be low because 90% of the product is lost as a result of dilution in the tear film and turnover within minutes after application.7 Accordingly, rapid corneal melting is treated aggressively with topical application of serum as frequently as every hour.

Melting or infected corneal ulcers induce a substantial secondary uveitis.1 The combination of antimicrobials, antiproteinases, and anti-inflammatory medications often necessitates 24-hour frequent nursing care that can be taxing for clients and veterinary staff. Increasingly, veterinarians are combining medications into cocktails or ulcer mixtures to decrease treatment delivery time, decrease the stress associated with frequent patient handling, and increase treatment compliance. Such mixtures have been delivered via automated infusion pumps for further efficiency.8 Anecdotally, results have been favorable, but the efficacy of the drugs when mixed into a combination product has not been thoroughly investigated.

Sample population—Bacterial corneal pathogens of horses were identified by searching the University of Florida database for the period from January 2003 through December 2006. Fungal corneal pathogens of horses were identified similarly, except the time frame for the database search was January 2005 through December 2005. Representative isolates of the 3 most commonly identified bacterial and 2 most commonly identified fungal species were shipped to an MIC testing laboratory.a

Antiproteinase activity—Proteinase inhibitory activity of the drug combination and serum were quantified by use of a commercially available gelatinase-collagenase assayg conducted in accordance with manufacturer protocols. Briefly, solutions of fluorescein-quenched gelatin from pig sking or collagen I from bovine skinh were placed in microplate wells. Clostridium histolyticum proteinase,g a product with both collagenase and gelatinase activity, was then added to these wells at 0.2 U/mL for the gelatin assays (to induce gelatinase activity) and 1.0 U/mL for the collagen assays (to induce collagenase activity) on the basis of data obtained empirically by the authors. The antiproteinase of interest (ie, serum or the drug combination) was then added as a third component to the microplate wells in concentrations ranging from 12.5% to 100%. The various concentrations were prepared via dilution with the reaction buffer provided in the assay kit.g Reaction buffer alone was used as an antiproteinase negative control sample, and 1,10-phenanthrolineg was used as an antiproteinase positive control sample. Destruction of proteins, with consequent release of fluorescein molecules, was quantified by measuring the MFI every 15 minutes for 5 hours with an automated microplate reader. Mean ± SD fluorescein excitation and emission were set at 485 ± 20 and 528 ± 20 nm, respectively. Background emissions were determined by calculating the mean MFI of 3 empty wells on each plate; background emissions were subtracted from all sample measurements before statistical analyses. All incubations were performed in duplicate. The incubation start time was designated as 0 hours. Results of other experimentsi have been used to validate the assay for use with equine samples, verify high intra-assay precision, and verify that results do not differ significantly when the drug combination is stored for up to 2 weeks.

Statistical analyses—Daily pH values, optical clarity scores, and MIC data were compared by use of paired t tests. Antiproteinase data were analyzed by use of a 2-way ANOVA. Values of P < 0.05 were considered significant.

SERUM VERSUS THE DRUG COMBINATION IN THE GELATIN ASSAY

SERUM VERSUS THE DRUG COMBINATION IN THE COLLAGEN ASSAY

The fluorometric assay used in this study allowed quantification of both the antigelatinase and anticollagenase types of antiproteinase activity. More specifically, the assay quantified enzymatic destruction of dye-quenched proteins. As protein was degraded, fluorescein dye was released and its emission measured. Therefore, protein destruction was quantified by measurement of the MFI. When antiproteinase agents (ie, serum or the drug combination) were added to the assay, their activity was quantified in terms of reductions in MFI. Serum and the drug combination each had significant antigelatinase activity for hours 1 through 5. Similarly, both serum and the drug combination had anticollagenase activity throughout the 5-hour incubation period, although this effect was only significant for the 100% concentration of serum.

The shortcomings of in vitro studies have been documented. However, for the study reported here, it is worth mentioning that there may be important differences between laboratory and clinical proteinase activity. First, the concentrations at which proteinases truly cause corneal melting in vivo have not been determined and therefore may not be adequately represented by the concentrations of CHP used in this study. Second, CHP was used in this study for its ability to act as a broadspectrum proteinase that targets native collagen and other ECM proteins (including gelatin).g However, the degree to which the proteinase activity of CHP correlates with the proteinase activity in animals with corneal melting is also unknown. Additional studies on the source, type, and concentration of proteinases that result in corneal melting in vivo would be necessary to make such comparisons. The species differences represented by the assays (ie, porcine gelatin and bovine collagen I) are not likely of major consequence because the structure of collagen is preserved among species.6

Other studies2,4,12 on the antiproteinase activity of serum have focused largely on its preservation of gelatin or nonspecific collagen substrates. Collagen type I was chosen as a substrate in the study reported here because it is the predominant protein in corneas.5 To our knowledge, this is the first study to provide evidence on the ability of serum to specifically preserve collagen type I. The degree to which serum inhibited destruction of collagen type I (collagenase-specific destruction) in this study was 49% via fluorescence microplate assay. This is similar to the inhibitory capacity for serum against the proteinase activity of C histolyticum on whole equine corneas, as determined via a hydroxyproline release assay.12 This correlation suggested, albeit indirectly, that proteinase destruction of equine corneas was largely attributable to collagenase activity on collagen type I. This is of potential clinical relevance because improved knowledge of the specific substrates and enzyme classes involved in corneal melting will better enable clinicians to adopt an evidence-based approach to antiproteinase therapy.

Consistency of pH supports stability of the drug combination. However, the fact that the combination rapidly settled out of suspension is noteworthy. This may adversely affect treatment efficacy when delivered via automated subpalpebral lavage infusion pumps because active drug particles may never reach the subpalpebral lavage tubing. Manual shaking would be recommended before each treatment with this drug combination. Negative interactions between the medications have not been completely ruled out but were considered unlikely given sufficient antimicrobial and antiproteinase activities of the drug combination.

To our knowledge, the study reported here is the second in which in vitro antimicrobial efficacy of topical ophthalmic drug combinations has been described. In the other study,13 investigators evaluated the effects of various combinations of tobramycin 0.3%, gentamicin 0.3%,j miconazole 1%,k and atropine 1%l against the growth of Pseudomonas spp and Aspergillus spp. The authors in that study found no significant difference between the antimicrobial efficacies of drug combinations, compared with the efficacy for each drug separately.

The aforementioned studies, as well as the study reported here, provide preliminary data to support the use of drug combinations for infected corneal ulcers as well as for concurrent conditions such as corneal melting and uveitis. However, several important issues should be addressed before these combinations are considered justified for use in vivo. Of paramount importance is the judicious use of topical antimicrobials. Drug combinations consisting of multiple antimicrobials are indicated only in patients with culture and susceptibility results that support such treatments or in patients at risk of corneal perforation (ie, patients with deep stromal or melting ulcers) that require treatment before such results can be obtained. Drug combinations also pose a risk of increased corneal toxicosis relative to separate medications.14 The degree of toxic effects varies among drug combinations on the basis of their components and preservatives15 and should be weighed against potential benefits before administration. Finally, effects of the delivery route for drug combinations should be considered. Continuous infusions via automated pumps connected to subpalpebral lavage tubing are already in sporadic clinical use. Although the results of 1 preliminary study8 are promising, the impact of drug combinations on tear film dynamics, and therefore on corneal health, is unknown.

Drug combinations have the attractive potential of minimizing the time, stress, and fatigue associated with topical treatment regimens for horses with severe, melting ulcerative keratitis. The in vitro efficacy revealed in the study reported here supported anecdotal reports of clinical efficacy with drug combinations, although the antiproteinase effect of serum is a concentration-dependent effect. To our knowledge, this study provided evidence for the first time of the inhibitory effect of equine serum on collagen type I destruction in vitro and introduced the possibility of improved antifungal efficacy of natamycin when delivered in combination with other keratitis medications.