Transverse dynamic CT image of a clinically normal dog illustrating the placement of regions of interest on the aorta (ROI 1), portal vein (ROI 2), liver (ROI 3), pancreas (ROI 4), and stomach (ROI 5). Hounsfield units from each time point of the dynamic CT scan were used to generate TACs. 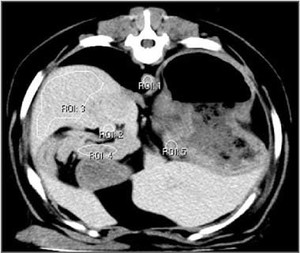 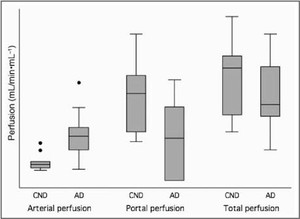 Hepatic vascular anomalies are rare in dogs and cats, but result in substantial morbidity and death. Congenital and acquired portosystemic shunts as well as arterioportal fistulae alter hepatic hemodynamics by routing portal blood flow away from the liver. The reduced portal blood flow causes microhepatia as well as neurologic and gastrointestinal clinical signs.

Hepatic perfusion has been studied in clinically normal dogs,1–6 naturally occurring portosystemic shunts,7 and surgically created shunts8 by use of a variety of invasive and noninvasive methods. To compensate for reduced portal blood flow, hepatic arterial, pancreatic, and small intestinal perfusion increases in dogs with portosystemic shunts and in people with portal hypertension.9,10 The hepatic arterial vascular resistance decreases with decreased portal flow, providing a 0.0025 mL/min•g−1 increase in arterial flow for every 0.01 mL/ min•g−1 decrease in portal flow.11 The techniques generally used to measure hepatic perfusion include nuclear scintigraphy and Doppler ultrasonography.

Image analysis—Dynamic CT images were made by use of a single detector row helical CT scanner.a Acquisition parameters were 2- to 7-mm collimation, 80 to 120 kV, and 100 to 200 mA. A low dose of an iodinated contrast mediumb,c (0.5 mL/kg) was injected into a cephalic or jugular vein at a rate of 5 mL/s.13 Images were acquired with either a 5-second delay after injection with 2-second intervals for a total of 20 to 60 images or with no delay and a 1-second interval for 60 to 70 images.

Dynamic CT images were analyzed by use of freely available perfusion softwared and a spreadsheet program.e Regions of interest were placed within the aorta, portal vein, liver, pancreas, and gastric wall (Figure 1). Software analysis parameters were HU filter of 0 to 400, smoothing kernel of 1, 2 and 1 pixel, and logarithmic model. Time attenuation curves were generated from these regions of interest by use of the perfusion software, subtracted from baseline values for clinical normalization, and saved as spreadsheets.

Time attenuation curves for hepatic arterial perfusion, gastric perfusion, and pancreatic perfusion were analyzed with an equation as follows (equation 1):

For total hepatic perfusion, the arterial and portal perfusions were summed. Slopes were calculated with a minimum of 3 datum points.

Statistical analysis—Perfusion of the reference organs on CT scans was compared between clinically normal and affected dogs by use of the Student t test. Once the more uniform reference organ was identified, it was used to calculate the hepatic portal perfusion values. To determine differences between clinically normal and affected dogs with regard to hepatic arterial perfusion, hepatic portal perfusion, total perfusion, and hepatic perfusion index, the Student t test was used. Portal perfusion and related measurements were not calculated for dogs with arterioportal fistula because of the high incidence of hepatofugal flow.

To determine whether perfusion measurements differed by shunt type, analysis of variance was performed. Single intrahepatic shunt, single extrahepatic shunt, multiple acquired extrahepatic shunt, and arterioportal fistula groups were compared with clinically normal dogs by use of the Dunnett 1-tailed t test. All analyses were performed by use of a statistical software program.f Values of P < 0.05 were considered significant.

Scans—Not all scans allowed calculation of each perfusion variable as a result of physiologic motion or lack of a reference organ. Three affected dogs and 1 clinically normal dog did not have the pancreas included in the scan, and 1 had excessive motion artifact in the later phase. Both conditions precluded analysis of hepatic portal perfusion, total hepatic perfusion, and hepatic perfusion index. These 3 variables were also not calculated for dogs (n = 6) with arterioportal fistula because of the abnormal nature of their portal blood supply. Two additional dogs with arterioportal fistula did not have the pancreas included in the scan for pancreatic perfusion analysis. Two affected dogs had excessive gastric contraction that did not allow gastric perfusion calculation.

Image analysis—Pancreatic perfusion was not significantly different between clinically normal and affected dogs (Table 1). Gastric perfusion was higher in affected dogs, compared with clinically normal dogs, and in dogs with congenital intrahepatic shunts as a subgroup (Table 2). The pancreas was then selected as the most consistent reference organ for hepatic portal perfusion analysis.

Values of P < 0.05 were considered significant.

The perfusion variables calculated in our study by use of dynamic CT agreed well with values reported in the literature,1,6,11,13,16-19 which lends credence to its use in determining perfusion noninvasively. Further studies are required to validate the repeatability of hepatic perfusion in a single dog, as portal perfusion can vary after feeding and with different composition of diets.16 All dogs undergoing CT had food withheld overnight, so this may not have affected the hemodynamics at the time of our study. Hepatic perfusion is inherently variable between dogs, with a mean value in the range of 1.0 to 1.3 mL/min•g−1.6 This variability will be a natural limitation of hepatic perfusion measurement.

Because the CT method involves drawing regions of interest and calculating slopes, there may be interobserver and intraobserver variation in calculating the variables. Repeatability of calculation was not assessed in our study.

The hepatic artery was able to maintain a normal total hepatic blood supply in dogs with portal vascular anomalies. Looking at the differences between mean arterial and portal perfusion in clinically normal and affected dogs, a 0.6 mL/min•mL−1 ratio of increase in arterial perfusion occurs for every 1 mL/min•mL−1 decrease in portal perfusion, which is higher than the 0.25:1 ratio reported in physiologic experiments.9,11 This may reflect the lifelong duration of altered response rather than the shorter periods experienced by dogs with experimentally created shunts. Such dogs have a decrease in total portal perfusion, whereas the congenitally affected dogs did not.

The hepatic perfusion index was significantly increased in the affected dogs as a group and in dogs with intrahepatic shunts as a subgroup. This index should be a reliable measurement of hepatic perfusion, as it eliminates variation caused by cardiac output and contrast bolus dynamics. The variant used in nuclear medicine has shown similar alterations in dogs with portosystemic shunts and a reduction in the index after corrective vascular surgery.7 One of the more common hemodynamic methods used to diagnose and monitor dogs with portosystemic shunts is the shunt fraction.17 This scintigraphic technique quantifies the fraction of blood that bypasses the liver through a portosystemic shunt and has been shown to be correlated with outcome of surgery to correct the shunt.18,19 Limitations to the shunt fraction exist such as inaccuracy,19,20 and the shunt fraction does not measure perfusion of the liver directly. Many dogs undergoing partial ligation of a shunt have persistent flow after surgery, which may not correlate directly with the change in perfusion of the liver. Measurements of perfusion by use of CT could offer a direct measurement of the initial hepatic perfusion and the change in postsurgical hepatic perfusion.

Evaluation of hepatic, gastric, and pancreatic perfusion is feasible with dynamic CT. The absolute perfusion values obtained by this method are within the expected range when calculated for clinically normal dogs and reveal significant differences between clinically normal dogs and those with congenital portal vascular anomalies. This noninvasive technique can be applied to the organ as a whole or to selected segments by use of regions of interest and will be a useful tool in evaluating perfusion in dogs with hepatic vascular anomalies.