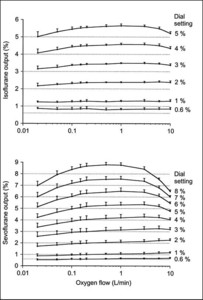 Objective—To examine the accuracy and precision of isoflurane and sevoflurane anesthetic vaporizers.

Conclusions and Clinical Relevance—A possible explanation for the inaccuracy of the isoflurane vaporizer may be that it was manufactured to be accurate with air but not oxygen, which must be accounted for when using the vaporizer with oxygen, especially with nonrebreathing systems. The sevoflurane vaporizer may not deliver accurate agent concentrations at high flow and high dial settings. Both vaporizers are suitable for clinical use with a wide range of oxygen flow rates if these precautions are properly addressed.

Objective—To examine the accuracy and precision of isoflurane and sevoflurane anesthetic vaporizers.

Conclusions and Clinical Relevance—A possible explanation for the inaccuracy of the isoflurane vaporizer may be that it was manufactured to be accurate with air but not oxygen, which must be accounted for when using the vaporizer with oxygen, especially with nonrebreathing systems. The sevoflurane vaporizer may not deliver accurate agent concentrations at high flow and high dial settings. Both vaporizers are suitable for clinical use with a wide range of oxygen flow rates if these precautions are properly addressed.

Dosage ranges of volatile anesthetics at which effective anesthesia is achieved without undesirable systemic effects are narrow; even at those dosages, cardiovascular and respiratory suppression may develop.1 Therefore, close monitoring of anesthetized patients is important to allow delivery of the minimum necessary amount of anesthetic without compromising physiologic functions. One aspect of delivering safe, accurate anesthesia is the importance of the reliability of anesthetic vaporizers that allow constant delivery of agents in a reproducible manner, independently of the fresh gas flow used.

Few reports have been published that assess the performance of different vaporizers. Data are distributed by the vaporizer manufacturers, but those data often do not include details of the experiments (eg, SD of the data and the number of machines examined). It is also important for others to be able to reproduce the data distributed by the vaporizer manufacturers. Most vaporizers presently being marketed are sold for use in humans, and the distributed vaporizer accuracy data are usually for a range of flow rate from 0.2 to 10 L/min.a,b The Matthew J. Ryan Veterinary Hospital of the University of Pennsylvania has been using closedcircuit anesthesia for more than a quarter of a century to anesthetize small animal patients that weigh > 2 kg. Depending on weight, most of those animals need an oxygen flow rate from 0.02 to 0.2 L/min, which is lower than the flow rates used in human anesthesia and for which there are no data from the vaporizer manufacturers. These data are important for use of closed-circuit or low flow rates in small animal patients.

The purpose of the study reported here was to examine the accuracy and precision of 5 isoflurane and 5 sevoflurane vaporizers in our hospital, over a wide range of oxygen flow rates.

Procedures—The order in which the vaporizers were tested was determined by availability (ie, not used for clinical anesthesia at the time). Each vaporizer was tested once with 100% oxygen as the carrier gas. Flow rates were set in the following order: 0.2, 0.15, 0.1, 0.05, and 0.02 L/min (low flow rates), then 0.5, 1, 3, 6, and 10 L/min (higher flow rates). The reason for the decreasing order for low flow rates was that when a vaporizer is used, oxygen must flow to flush out any agent left in the path of gases from previous use. When starting with the lowest flow (0.02 L/min), the output did not stabilize for approximately 1 hour, whereas when starting with 0.2 L/min, the output stabilized within 10 to 15 minutes. When proceeding at decreasing flow rates, the output was more stable and stability developed more quickly. Low flow rates were measured by use of a calibrated glass cylinder, which was filled with water and placed into a tank of water in an inverted position. Gas from the common gas outlet of the anesthesia machine was directed into this cylinder for 1 minute, and the volume of water displaced from the cylinder indicated gas flow from the anesthesia machine (water-displacement method). Flow meters on the anesthesia machines consisted of 2 serially connected flow indicator tubes: one for flow rates < 1 L/min and the other for flow rates from 1 to 10 L/min. These tubes were used to measure high oxygen flow rates (> 0.2 L/min). At each flow rate, different concentrations were tested from lower to higher vaporizer dial settings as follows: 0.6%, 1%, 2%, 3%, 4%, and 5% isoflurane and 0.6%, 1%, 2%, 3%, 4%, 5%, 6%, 7%, and 8% sevoflurane. The time allowed for stabilization of measurement (flow time) was determined in preliminary trials as follows: 0.02 L/min for 20 minutes, 0.05 L/min for 10 minutes, 0.1 L/min for 4 minutes, 0.15 L/min for 4 minutes, 0.2 L/min for 2 minutes, 0.5 L/min for 1 minute, 1 L/min for 1 minute, 3 L/min for 0.5 minutes, 6 L/min for 0.5 minutes, and 10 L/min for 0.5 minutes. The output concentration of both types of vaporizers tended to continuously decrease at flow rates of 6 and 10 L/min, especially at higher dial settings, probably because of the continuous cooling of the liquid agent in the vaporizing chamber. Because of the cooling of vaporizers, we did not wait until the concentration stabilized but uniformly sampled gas for measurement 30 seconds after each change in the dial setting while testing 3, 6, and 10 L/min flow rates. Gas samples were collected at the common gas outlet of the anesthesia machines and analyzed with a calibrated portable anesthetic gas indicator.g A similar indicator was used by the professional servicef that tested the vaporizers. The instrument was calibrated by the distributor 6 months before the experiment, and the accuracy of its readings was claimed to be within ± 3%. Calibration was also checked with air and 100% oxygen before each series of measurements. This gas indicator functions as a refractometer. The refractive index of a gas mixture depends on the gas composition, pressure, and temperature. If the ambient pressure and temperature are kept constant and the carrier gas composition is known (eg, oxygen or air), the volume percentage of a known anesthetic agent can be directly read from a properly calibrated scale. Any agent can be measured by multiplying the scale reading with an agent-specific constant provided by the manufacturer of the instrument. Although the refractometer is a handy and reliable instrument that is suitable for vaporizer testing in hospitals, its accuracy is less than that of other methods (eg, mass spectrometry) used in laboratory situations. However, the accuracy of the refractometer was sufficient for clinical interpretation of a vaporizer's accuracy and is a wellestablished method for measurement of anesthetic vapors.2-6

In this experiment, the rubber hand bulb of the refractometer was used to aspirate samples to the test chamber of the instrument when the oxygen flow was ≥ 0.5 L/min. However, at lower flow rates, the sample gas was allowed to flow directly through the chamber of the instrument to allow more effective collection of the slowly accumulating gas sample. This direct method is not recommended by the manufacturer because of the risk that pressure may increase inside the instrument and lead to erroneously high readings, especially at high flow-rate ranges at which commonly used vaporizers are recommended for use. However, in this study, unusually low gas flow rates were tested, which generate small, unimportant pressure changes inside the instrument. To rule out this possibility, the effect of continuous 0.2 L/min oxygen flow was tested, compared with no flow through the instrument, by use of different concentrations of isoflurane before the study; no difference was evident on the reading scale of the refractometer. Therefore, it was concluded that a direct flow rate of ≤ 0.2 L of oxygen/min through the refractometer would not adversely affect the accuracy of measurements in this study.

Each vaporizer was filled to the maximum level with the appropriate agent at least 2 hours before the experiment. Isofluraneh and sevofluranei were used as anesthetic agents. The ambient temperature was approximately 22°C, controlled by air conditioning. The ambient pressure was approximately 102 kPa in Philadelphia when the study was conducted, which was confirmed by comparison with online US weather reports. During the 3 weeks of the study, there was no major change in weather conditions. Knowing the ambient pressure may be important if one wants to apply data from this report to conditions at different altitude.

Accuracy of 5 isoflurane (ISO) and 5 sevoflurane (SEVO) vaporizers indicated as mean differences between measured agent concentrations (%) and dial settings expressed as a percentage of the applied dial settings.

Value not within the ± 20% range recommended by the International Organization for Standardization.7

Precision of 5 ISO and 5 SEVO vaporizers presented as SD of the measured concentration values (%) for each combination of dial settings and flow rates.

The significant (P < 0.05) critical differences between mean isoflurane precision values were 0.05% when dial setting was used and 0.07% when oxygen flow was used as independent variable during calculation. The same values for sevoflurane were 0.08% and 0.12%, respectively.

The concentration of both agents decreased at low oxygen flow rates and higher dial settings, but the accuracy remained within the ideal ± 20% except for 0.6% and 1% isoflurane dial settings. Because agent concentration in the breathing circuit changes slowly during closed circuit anesthesia, the effect of small inaccuracies in vaporizer output is probably clinically negligible in that situation.

Mean sevoflurane concentrations decreased at combinations of the highest flow rates and dial settings in this study, probably because under these circumstances, the flow through the vaporizing chamber was so high that full saturation of oxygen with sevoflurane might not have been possible. This may have clinical importance when using these sevoflurane vaporizers for mask induction of humans15 or animals or for chamber induction of animals.

Overall precision was better for the isoflurane vaporizers, but it was reasonably good for both vaporizer types; therefore, the user should be able to consistently correct for the inaccuracies. For example, one has to be careful when using these isoflurane vaporizers with oxygen and a nonrebreathing system because the inspired agent concentrations may become somewhat higher than the dialed settings indicate. It should be remembered when performing mask or chamber inductions with the sevoflurane vaporizers that it may not be able to deliver high agent concentrations at high fresh-gas flow rates. Results of this study suggest that both vaporizers are suitable for clinical use with a wide range of oxygen flow rates, if these precautions are properly addressed.