The Department of Homeland Security is exploring sites for a proposed new National Bio and Agro-Defense Facility to replace the aging Plum Island Animal Disease Center.

The Plum Island center, off the coast of Long Island, N.Y., provides the only U.S. research and confirmatory diagnostic capabilities for many high-consequence foreign animal diseases. It is also the only U.S. laboratory equipped with research facilities that permit study of these diseases in livestock.

The proposed NBAF, which is in the planning phase, would replace the Plum Island center and enhance capabilities for defense against disease agents. The new facility would modernize and integrate agriculture biocontainment laboratories for zoonotic diseases, foreign animal diseases, and human pathogens in support of the missions of the DHS, USDA, and the Department of Health and Human Services.

The NBAF would be about 500,000 square feet on at least 30 acres. The DHS is requesting expressions of interest for possible locations from federal agencies, state and local governments, industry, academia, and other parties and organizations.

The DHS will evaluate locations on the basis of research capabilities; workforce; acquisition, construction, and operations; and community acceptance. The department will ultimately compile a list of sites to include in an environmental impact statement.

The deadline for expressions of interest is March 31. Details are available from a Jan. 19 notice in the Federal Register, which is online at www.gpoaccess.gov/fr/. Information is also available at www.dhs.gov/nbaf or from Glynis Fisher by e-mail at glynis.fisher@dhs.gov or by fax at (202) 205-3204.

A new report from the National Research Council recommends establishing an interagency group to coordinate the complex patchwork of federal regulations governing the transport of research animals.

The report offers some solutions to the declining availability of air transportation for nonhuman primates. The report suggests that the National Institutes of Health should update and implement the National Primate Plan, that the National Primate Research Centers and other research institutions should work together to develop reliable ground transportation for nonhuman primates, and that federal agencies and commercial shippers should develop a closed-container system for transporting animals.

Finally, the report recommends that research institutions designate a single individual to be responsible for ensuring the safe shipment and receipt of animals.

The full report is available online at www.nap.edu/catalog/11557.html.

The Department of Agriculture has awarded $10 million to the University of Illinois to obtain a draft sequence of the swine genome.

A female Duroc pig will be the source of the DNA for the two-year project—which could lead to the development of new genetic tools to identify and select pigs that resist infectious diseases, yield larger litter sizes, and produce leaner cuts of meat.

The swine genome is similar to the human genome in size, complexity, and organization. Because of these similarities, understanding the swine genome could lead to biomedical advances such as pig-to-human organ transplants and treatments for disease in humans.

More information about the Swine Genomics Program at the University of Illinois is available at www.swinegenomics.com.

Formation of a new visionary group advising the AVMA Executive Board on animal welfare matters is under way, more than a year ahead of schedule.

Board members green-lighted a plan for immediate implementation of the Animal Welfare Advisory Committee during a special meeting held prior to the AVMA Veterinary Leadership Conference and House of Delegates Informational Assembly in Chicago, Jan. 13-15.

The Executive Board had initially scheduled the AWAC to be implemented in July 2007. But the impression in some welfare circles that the AVMA is failing to adequately address animal welfare prompted the Animal Welfare Governance Task Force to recommend moving forward with a modified version of the committee as soon as possible.

Soon after the January 2006 board meeting, a call for nominations to the AWAC was issued with a March 1, 2006, deadline. The Executive Board chair will appoint the seven AWAC members—veterinarians from a variety of fields, including food animal practice/production animal medicine, wildlife/exotic animal medicine, and laboratory animal medicine. The committee will sunset no later than one year after its members have been appointed.

The American Veterinary Medical Foundation has revised the forms for applying for Animal Disaster Relief and Response Fund grants of up to $2,000.

The AVMF revised the forms to decrease the time between submission and committee review, as well as to clarify which expenses are reimbursable. The Ad Hoc Review Committee considers applications at least weekly. If necessary, the AVMF sends a request for additional information to the applicant.

The AVMF Board of Directors established the Animal Disaster Relief and Response Fund on Sept. 1, 2005, to provide funding for disaster relief in connection with Hurricane Katrina and future disasters. 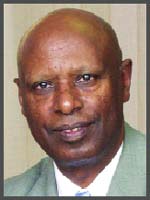 A Tuskegee faculty member since 1979, Dr. Habtemariam had been associate dean for research and graduate studies at the veterinary college since 1999. He has also served as director of the Center for Computational Epidemiology, Bioinformatics, and Risk Analysis; director of Biomedical Information Management Systems; and professor of Epidemiology and Biomedical Informatics.

Dr. Habtemariam is president of the World Association of Veterinary Educators. He was elected a member of the National Academies of Practice and is an honorary member of the American Veterinary Epidemiology Society.

The new dean has been a consultant for the Pan American Health Organization and the World Health Organization. He and his research team have helped coordinate more than a dozen international workshops in Africa, the Caribbean, and the United States to train scientists in risk analysis.

Dr. Habtemariam received his certification in risk analysis from the Department of Agriculture’s Graduate School. He holds a master’s degree in preventive veterinary medicine and a doctorate in epidemiology, both from the University of California-Davis. He earned his veterinary degree from Colorado State University in 1970, after attending college in his native Ethiopia.

The Marine Mammal Center, a nonprofit rehabilitation and research hospital in Sausalito, Calif, has begun rebuilding its 30-year-old facility.

The center will continue to treat marine mammals during the $18 million donor-funded project, which should be complete by the summer of 2007. The goal of the project is to create a facility with new pools and pens, as well as a new water filtration system to improve rehabilitation of specific species such as seals and sea lions.

The new complex will feature three buildings—the Marine Science Community Education Center, the Veterinary Science and Research Center, and the Marine Mammal Medical Center—around a central courtyard and amphitheater. A future phase will add a 40-foot permanent tank for cetaceans such as harbor porpoises and dolphins.

More information is available at www.marinemammalcenter.org.

Tindamax being studied as treatment for tritrichomoniasis in cats

Presutti Laboratories is funding a study examining Tindamax (tinidazole) as a potential treatment for tritrichomoniasis in cats. Tritrichomonas foetus, which is closely related to Trichomonas vaginalis in humans, has been identified as an emerging intestinal pathogen of domestic animals.

“At present there are no approved drugs for treatment of these protozoal pathogens in companion animals,” Dr. Gookin said. “Based on human clinical data and our own in vitro data, we believe tinidazole has outstanding potential for the routine treatment of T foetus.”

Though metronidazole or metronidazole benzoate are often compounded for veterinary use, Dr. Gookin said they are ineffective against T foetus and are not approved for that use.

The infection is reportedly becoming more widespread, particularly in shelters and catteries. In a recent study of 117 show cats, Dr. Gookin and colleagues found 31 percent prevalence.

Similar to Giardia, Dr. Gookin said, T foetus is usually transmitted by the fecal-oral route. Signs in cats include semiformed or cow pie-shaped feces with a strong, foul odor; blood or mucus in the feces; an inflamed anus; fecal incontinence; and in some cases, rectal prolapse.

Tindamax, a second-generation 5-nitroimidazole, was approved in 2004 for use in the United States for treatment of giardiasis and amebiasis in humans. John Presutti, president of Presutti Laboratories, added that in the future, the company plans to investigate whether Tindamax may also be effective against amebiasis and giardiasis “in pets and other domestic animals.”

The U.S. Pharmacopeia has released a free monograph on macrocyclic lactones. The monograph includes information on the avermectins doramectin, eprinomectin, ivermectin, and selamectin, along with milbemycin and moxidectin. The monograph lists information on each drug’s indications, adverse effects, regulatory considerations, and environmental impact. To view the monograph, visit the USP Web site at www.usp.org/audiences/veterinary.

A training course in foreign animal diseases will be available again this summer at the University of Wisconsin’s School of Veterinary Medicine.

The school, in collaboration with the U.S. Department of Agriculture’s Animal and Plant Health Inspection Service, will offer the Fourth Biennial Foreign Animal Disease Training Course from July 30-Aug. 4.

This year’s meeting again features speakers from the Department of Veterinary Tropical Diseases at the University of Pretoria in South Africa, the Food and Agriculture Organization of the United Nations in Italy, and the Veterinary Laboratories Agency-Wey-bridge in the United Kingdom. Other speakers are from the USDA, academic institutions, state veterinary agencies, the Centers for Disease Control and Prevention, and the U.S. and Canadian military.

This year’s course will include a daylong tabletop exercise in controlling the incursion of foreign animal disease. The meeting will also provide time for one-on-one interaction among attendees—as during the 1999, 2001, and 2003 courses.

Information and registration materials are available at www.vetmed.wisc.edu/pbs/courses/FAD2006 or by e-mailing organizers at FAD2006@svm.vetmed.wisc.edu.