Sample—Cecum, ileum, and jejunum specimens obtained from 18 healthy horses at an abattoir.

Procedures—Specimens were allotted into 2 groups. Anastomoses were stapled with 4.8-or 3.8-mm staples. Precompression time was 15 seconds for both groups. Staple lines were cut into proximal, middle, and distal sections. Thickness of intestinal walls was measured with a calibrated tissue micrometer, photographs were obtained, and intestinal tissues were digested. An investigator measured staples and assessed the shape of staples on high-definition digital images. Number of optimally shaped staples and staple height were compared among sections and between groups. 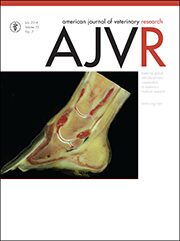