Clear All Modify Search
Laparoscopic omentalization of a pancreatic cyst in a cat
Author: Michael Brückner

CASE DESCRIPTION A 15-year-old spayed female domestic shorthair cat was examined because of a 1-year history of daily vomiting, which was not associated with food intake.

CLINICAL FINDINGS Initial physical examination findings and serial hematologic and serum biochemical results were unremarkable except for the presence of a grade 2/6 left-sided heart murmur and persistent mild azotemia. A well-defined multilobulated cystic structure located between the spleen and left kidney was identified by abdominal ultrasonography.

TREATMENT AND OUTCOME Laparoscopic exploration revealed that the cystic structure originated from the left pancreatic limb. With laparoscopic guidance, the structure was percutaneously drained and underwent omentalization. Then, a partial cystectomy was performed to obtain a tissue specimen for histologic evaluation. The vomiting resolved for a short period immediately after surgery and then gradually resumed over 6 months, albeit with less frequency than prior to surgery. The histologic diagnosis was pancreatic cyst. Abdominal ultrasonography performed 6 months after surgery revealed that the original cyst had completely resolved but multiple smaller cysts had developed. The serum feline pancreas-specific lipase activity was not measured before surgery but remained increased from the reference limit following surgery, and chronic pancreatitis was considered the most likely cause of pancreatic cyst formation. 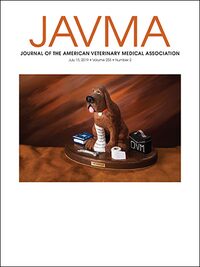 Malakoplakia of the urinary bladder in a young French Bulldog
Author: Michael Brückner

A diagnosis of malakoplakia was made on the basis of results of hematologic and serum biochemical testing, abdominal ultrasonography, bacterial culture, and cystoscopic biopsies of the urinary bladder wall. Biopsy samples were sent for routine histologic examination and fluorescence in situ hybridization to confirm the presence of intracellular and subendothelial bacteria.

Treatment with enrofloxacin was started after the diagnosis of malakoplakia was confirmed. During treatment, polypoid changes in the urinary bladder decreased dramatically but did not disappear. On follow-up ultrasonography after 12 weeks of treatment, marked improvement was visible and results of repeated bacterial culture and fluorescence in situ hybridization of bladder wall samples were negative. The patient was free from clinical signs and had an ultrasonographically normal urinary bladder 59 weeks after antimicrobial treatment was discontinued.

Malakoplakia, a granulomatous disease characterized by impaired histiocytes that are unable to completely digest phagocytized bacteria, is a very rare disease in dogs, but early suspicion of the condition is essential to allow timely diagnosis and avoid disease progression and the need for prolonged treatment. Malakoplakia should be considered in young dogs with chronic urinary tract infections; the diagnosis can be made through a combination of histologic examination and fluorescence in situ hybridization of bladder wall biopsy samples. 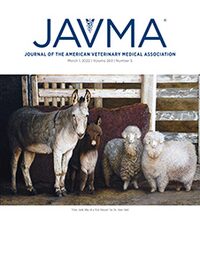