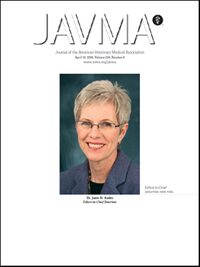 OBJECTIVE To characterize and compare gait variables in Doberman Pinschers with and without cervical spondylomyelopathy (CSM).

PROCEDURES A neurologic examination was performed on all dogs. The diagnosis of CSM was confirmed with MRI. Temporospatial and kinetic gait variables were measured by use of a pressure-sensitive walkway. Temporospatial variables evaluated included stance phase duration, swing phase duration, gait cycle duration, stride length, and gait velocity. Kinetic variables evaluated included peak vertical force and vertical impulse. Random-effects linear regression was used to determine the difference between CSM-affected and clinically normal dogs for each of the 7 variables.

CONCLUSIONS AND CLINICAL RELEVANCE In this study, significant differences in temporospatial variables were identified between the thoracic limbs of clinically normal and CSM-affected dogs, with the values being smaller for the CSM-affected dogs than for the clinically normal dogs. A pressure-sensitive walkway may provide a valid, practical option for rapid, objective assessment of gait and response to treatment in dogs with CSM. 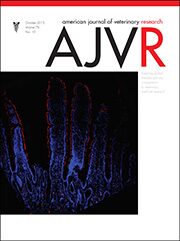 TREATMENT AND OUTCOME Surgical decompression was achieved by performance of a right-sided hemilaminectomy at L2. Histologic examination of biopsy samples obtained from the mass revealed an ill-defined zone of mature vascular proliferation extending through the preexisting vertebral bone, consistent with vertebral angiomatosis. After surgical recovery, adjuvant radiation therapy was initiated with a total dose of 48 Gy administered in 16 fractions of 3 Gy each over a 3-week period. Neurologic function rapidly improved to full ambulation with only minimal monoparesis of the right pelvic limb. Results of neurologic and MRI examination performed 26 months after surgery indicated no change in neurologic status or evidence of recurrence.

CLINICAL RELEVANCE To the authors' knowledge, this report was the first to describe the long-term outcome for vertebral angiomatosis in a cat. Surgical decompression and radiation therapy provided an excellent outcome in this case. Vertebral angiomatosis should be considered as a differential diagnosis for any young cat with thoracolumbar myelopathy secondary to a mass associated with the vertebral pedicle. 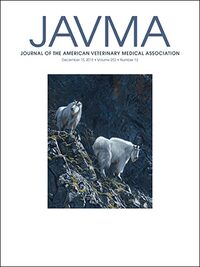 A 3-year-old 31.1-kg castrated male mixed-breed dog was evaluated because of a 1- to 2-week history of paraparesis, knuckling of the hind feet, and difficulty posturing to urinate or defecate.

The dog was paraparetic but weakly ambulatory with a kyphotic posture, a mildly decreased patellar reflex in the right pelvic limb, increased tone in both pelvic limbs, and marked hyperesthesia on paraspinal palpation of the lumbar region. The urinary bladder was enlarged and firm on palpation. Neuroanatomic findings were primarily consistent with localization to the T3-L3 spinal cord segments. Magenetic resonance imaging of the thoracolumbar spinal column revealed a discrete intramedullary spinal cord mass from the cranial aspect of L4 to the middle of L5. The mass was sampled by fine-needle aspiration, and on cytologic evaluation, the suspected diagnosis was an ependymoma.

Owing to poor prognosis and limited treatment options, the owner elected euthanasia. Postmortem examination of the spinal cord and histologic findings for samples of the mass supported a likely diagnosis of ependymoma.

Ependymoma is a rare neoplasm in dogs but should be considered in young patients with evidence of a tumor in the CNS. Fine-needle aspiration of the spinal cord mass was possible in the dog of this report, and the cytologic findings provided useful diagnostic information. 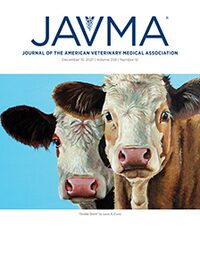