CASE DESCRIPTION AS-year-old male Dwarf rabbit and 4-year-old female Mini-Rex rabbit were evaluated because of anorexia and urine scalding of the perineum.

CLINICAL FINDINGS Abdominal radiography revealed a diffuse increase in the opacity of the urinary bladder attributable to urinary sludge. In 1 rabbit, abdominal ultrasonography revealed several mass-like lesions protruding from the mucosal surface into the lumen of the urinary bladder. Rabbits were anesthetized, and cystoscopy was performed with a rigid 2.7-mm, 30° endoscope. Histologic analysis of tissue samples obtained through the cystoscope operating channel revealed findings consistent with polypoid cystitis.

TREATMENT AND OUTCOME To remove the urinary sludge from each rabbit, the urinary bladder was filled with sterile saline (0.9% NaCl) solution and emptied with a gentle massage several times until the ejected fluid was transparent. Rabbits were treated with NSAIDs, antimicrobials (chosen following microbial culture of urine and antimicrobial susceptibility testing), bathing of the perineum, and a low-calcium diet. The male rabbit died of unrelated causes 18 months later; postmortem examination findings confirmed the polypoid cystitis. The female rabbit remained disease free through to last follow-up (12 months after initial evaluation).

CLINICAL RELEVANCE This was the first report of polypoid cystitis in pet rabbits. Although ultrasonographic findings supported this diagnosis, a definitive diagnosis was achieved through cystoscopy and lesion biopsy. Treatments administered were intended to reduce the potential sources of irritation. Research is needed to investigate the effectiveness of the applied interventions and the association between excessive urinary calcium excretion and polyploid cystitis in rabbits. 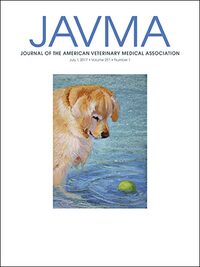 Medical records for client-owned rabbits that had a histologic diagnosis of appendicitis were reviewed.

Median age of the rabbits at presentation was 24.0 months (range, 4 to 84 months). Seventeen cases occurred during the summer and fall seasons. Decreased appetite (17/19 rabbits), abnormal rectal temperature (hyperthermia, 9/16 rabbits; hypothermia, 4/16 rabbits), hypocalcemia (8/11 rabbits), and hypoglycemia (7/15 rabbits) were common signs. Abdominal ultrasonography and CT findings were suggestive of appendicitis in 6 of 8 rabbits and in 1 of 2 rabbits, respectively. Of the 6 rabbits that received medical treatment, 3 died at 48 hours, 1 died at 24 hours after hospitalization, and 1 died at 10 days after presentation; 1 rabbit was alive at 1,030 days after presentation. Of the 8 rabbits that underwent appendectomy, 3 died before discharge from the hospital and 1 died 113 days after surgery; 4 rabbits were alive at 315, 334, 1,433, and 1,473 days after presentation. The remaining 5 rabbits either died or were euthanized before treatment could be instituted. In each of the 19 rabbits, the appendix had evidence of severe inflammation with mucosal ulceration, heterophilic inflammation, and necrotic debris.

For rabbits with decreased appetite and an apparently painful abdomen, hyperthermia, hypocalcemia, or hypoglycemia, appendicitis should be considered as a differential diagnosis. Further comparisons of medical and surgical treatments are required to establish treatment recommendations for rabbits with appendicitis. 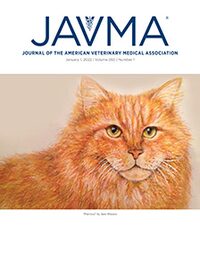