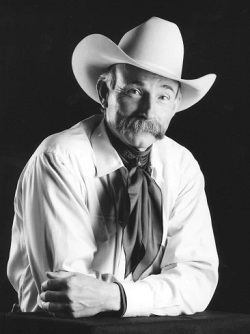 Dr. Baxter Black, the nationally known cowboy poet who first gained attention in the early 1980s for his entertaining talks and newspaper columns filled with folksy humor, began his career as a large animal veterinarian. He died June 10, 2022, at the age of 77.

“He was always self-deprecating,” said Cindy Lou Logsdon Black, his wife. “He just was so good with people, and he loved them and to make them laugh.”

Dr. Black’s first self-published poetry collection, “The Cowboy and His Dog or ‘Go, Git in the Pickup!’” came out in 1980. He appeared several times on “The Tonight Show Starring Johnny Carson” and continued publishing books of poetry and fiction.

Dr. Black later hosted the series “Baxter Black and Friends” on public television. In 1982, he joined “Morning Edition” on National Public Radio as a regular commentator for 20 years. He hosted the weekly syndicated radio program “Baxter Black on Monday” and wrote the syndicated newspaper column “On the Edge of Common Sense.”

For over 25 years, he traveled the U.S. and Canada giving talks to groups about his unique takes on life and experiences along the way.

Dr. Black owned cattle his whole life and loved being a cowboy. For many years, he didn’t tell people that he was born at the Brooklyn Naval Hospital in New York City because he didn’t think people could imagine a cowboy poet from New York City.

He grew up in West Virginia, Texas, and finally New Mexico, where his family eventually settled in Las Cruces. His father was dean of the Agriculture Department at New Mexico State University, then died of a heart attack at 40. Dr. Black, the oldest of four boys, was a teenager at the time.

Dr. Black completed his undergraduate education at New Mexico State and was accepted to Colorado State University College of Veterinary Medicine & Biomedical Sciences, contingent on passing three additional courses. Dr. Black took and passed two of the classes but failed the calculus and trigonometry course. His wife said he pleaded with the professor, who relented and raised the grade to a D minus on the condition that Dr. Black never take calculus and trigonometry again.

To pay his way through veterinary college, Dr. Black took on myriad jobs. He bought belt buckles in Mexico and made belts for students. He had a laundry service for coveralls, as well as a coffee concession in the men’s locker room. And he gave haircuts for a dollar.

Dr. James Armer, a veterinary classmate, said Dr. Black was a character even then.

“We all could see where he was going. The questions he’d ask in class would have this little lighthearted side to them that ended up in his writing and poetry,” Dr. Armer said. “He always had a different way of looking at things that was also right on. It didn’t surprise me at all that he ended up going in the direction he did. He was our generation’s Will Rogers.”

Dr. Black also became known for putting together the class’s yearbook, “Retained Memories,” a play on retained fetal membranes in cows. He drew cartoons of classmates with fun descriptors.

“He knew all of our classmates pretty well and all their kids and names and kept track of everyone,” Dr. Allyson Schafer said. “He did a lot of traveling around the country doing cowboy poetry. He would always call when near classmates, and we’d go to his programs when he was close enough.”

Dr. Black’s first job was at a feedlot in California, but he then became the company veterinarian for Simplot Livestock Co. based in Idaho. After 10 years, he took a job with an animal health company as the on-call veterinarian. In addition to his regular veterinary duties, Dr. Black began speaking at conventions and banquets on behalf of the company. He was supposed to be giving educational talks but became tired of them. He began to instead give humorous speeches and play his guitar.

In 1980, the Record Stockman out of Denver published the first entry in the column “On the Edge of Common Sense,” and he began publishing his poetry books. In all, he wrote nearly 30 books, which range from poetry and philosophy to novels and self-help books. One of his self-help books, “Lessons from a Desperado Poet: How to Find Your Way When You Don’t Have a Map, How to Win the Game When You Don’t Know the Rules, and When Someone Says It Can’t be Done, What They Really Mean Is They Can’t Do It,” offers 118 life lessons and serves as an autobiography.

Dr. Black met his wife, Cindy Lou, in 1982 at a meeting of the Arizona Cattle Growers Association. He adopted her daughter, Jennifer, and the couple later had a son, Guy. The family settled in Arizona.

Dr. Black continued with speaking engagements, including giving talks at the 2003 and 2007 Student AVMA symposiums. In late 2021, he retired from writing and speaking because of health issues.