Objective—To compare data obtained with an inertial sensor system with results of subjective lameness examinations performed by 3 experienced equine veterinarians for evaluation of lameness in horses.

Procedures—Horses were evaluated for lameness with a body-mounted inertial sensor system during trotting in a straight line and via subjective evaluation by 3 experienced equine practitioners who performed complete lameness examinations including lunging in a circle and limb flexion tests. Agreement among evaluators regarding results of subjective evaluations and correlations and agreements between various inertial sensor measures and results of subjective lameness evaluations were determined via calculation of Fleiss’ κ statistic, regression analysis, and calculation of 95% prediction intervals. 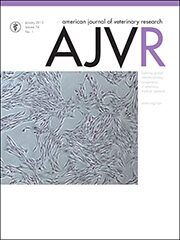 Objective—To measure respiratory motion of the thoracic wall region in dogs using a real-time motion tracking system and compare the amount of respiratory motion between dogs positioned with and without a vacuum-formable cushion.

Procedures—Dogs were anesthetized and positioned in sternal and dorsal recumbency with and without a vacuum-formable cushion. Three-dimensional movement of anatomic landmarks was measured with a real-time motion capture system that tracked the locations of infrared light–emitting diodes attached externally to the dorsal or ventral and lateral aspects of the thoracic wall.

Results—Dogs positioned in sternal recumbency had significantly less cranial-to-caudal and left-to-right respiratory motion at the lateral aspect of the thoracic wall, compared with dogs positioned in dorsal recumbency, whether or not a cushion was used. For dogs treated in sternal recumbency, use of a cushion significantly increased the peak displacement vector (overall movement in 3-D space) for 3 of 4 marker locations on the dorsal thoracic wall. As respiratory rate increased, respiratory motion at the lateral and ventral aspects of the thoracic wall decreased when data for all dogs in dorsal recumbency were evaluated together.

Conclusions and Clinical Relevance—Associations between respiratory rate and respiratory motion suggested that the use of rapid, shallow ventilation may be beneficial for dogs undergoing highly conformal radiation treatment. These results provide a basis for further research on respiratory motion in anesthetized dogs.

Objective—To optimize the use of CT-guided modeling for the calculation of body surface area (BSA) in domestic rabbits (Oryctolagus cuniculus).

Procedures—Adult rabbits (body weight, 1 to > 4 kg) that were client-owned animals undergoing CT for disease diagnosis or deceased laboratory animals donated from other research projects were scanned with a CT scanner. Images were transferred to a radiation therapy planning software program. Image slices were captured as contiguous slices at 100 kVp and 100 mA and processed to 0.1-cm-thick sections. The length of each contoured slice was summed to calculate a final BSA measurement. Nonlinear regression analysis was then used to derive an equation for the calculation of BSA in rabbits.

Conclusions and Clinical Relevance—The BSA calculated via the CT-guided method yielded results similar to those obtained with equations for other similarly sized mammals and verified the use of such equations for rabbits. Additionally, this technique can be used for species that lack equations for the accurate calculation of BSA. 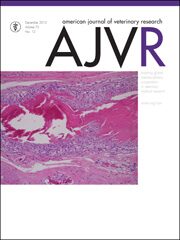 Objective—To evaluate effects of blood collection method and site on results of thromboelastography in healthy dogs.

Conclusions and Clinical Relevance—Different sampling methods resulted in small but significant differences in thromboelastographic values. Results justify the use of standardized techniques for research purposes, but all of these sampling methods were acceptable for 1-time clinical use.

Objective—To evaluate 2 plate designs for pancarpal arthrodesis and their effects on load transfer to the respective bones as well as to develop a computational model with directed input from the biomechanical testing of the 2 constructs.

Sample—Both forelimbs from the cadaver of an adult castrated male Golden Retriever.

Procedures—CT imaging was performed on the forelimb pair. Each forelimb was subsequently instrumented with a hybrid dynamic compression plate or a castless pancarpal arthrodesis plate. Biomechanical testing was performed. The forelimbs were statically loaded in the elastic range and then cyclically loaded to failure. Finite element (FE) modeling was used to compare the 2 plate designs with respect to bone and implant stress distribution and magnitude when loaded.

Results—Cyclic loading to failure elicited failure patterns similar to those observed clinically. The mean ± SD error between computational and experimental strain was < 15% ± 13% at the maximum loads applied during static elastic loading. The highest bone stresses were at the distal extent of the metacarpal bones at the level of the screw holes with both plates; however, the compression plate resulted in slightly greater stresses than did the arthrodesis plate. Both models also revealed an increase in bone stress at the proximal screw position in the radius. The highest plate stress was identified at the level of the radiocarpal bone, and an increased screw stress (junction of screw head with shaft) was identified at both the most proximal and distal ends of the plates.

Conclusions and Clinical Relevance—The FE model successfully approximated the biomechanical characteristics of an ex vivo pancarpal plate construct for comparison of the effects of application of different plate designs. 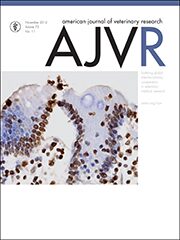 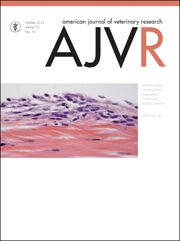 Conclusions and Clinical Relevance—Data for constitutively expressed genes with high expression stability are required for normalization of RT-qPCR assay results. Without such data, accurate quantification of gene expression in tumor tissue samples is difficult. Results of the present study indicated LOC611555 may be a useful RT-qPCR assay reference gene for multiple tissue types. Some commonly used reference genes may be suitable for normalization of gene expression data for tumors of dogs, such as lymphomas, osteosarcomas, or histiocytic sarcomas. 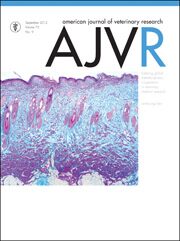 Conclusions and Clinical Relevance—For estimation of GFR in cats, use of a single-sample method with iodixanol, instead of a multisample procedure, may be an expedient tool in both clinical and research settings because of its benefits to patient well-being as a result of reduced stress associated with blood sample collection.

Procedures—Neutrophils were isolated from blood samples directly after blood sample collection and after incubation of blood samples with phorbol myristate acetate, collagen, adenosine diphosphate, epinephrine, or various concentrations of lipopolysaccharide or arachidonic acid. CD61+ neutrophils as an indicator of PNA formation were evaluated, and neutrophil size and granularity were assessed via flow cytometry.

Conclusions and Clinical Relevance—SIRS appeared to increase the degree of PNA formation and neutrophil shape change. Similar changes after neutrophil incubation with platelet agonists suggested that platelet activation has a role in PNA formation. Additional studies are necessary to determine the clinical importance and diagnostic value of PNA formation in dogs with SIRS and sepsis. 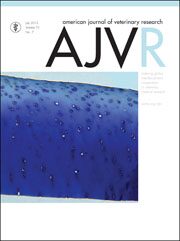 Objective—To evaluate the components of canine whole blood samples that contribute to results of thromboelastometry (TEM).

Procedures—For each dog, a blood sample was collected from a jugular vein into tubes containing no anticoagulant, EDTA, or citrate anticoagulant. Citrated whole blood samples underwent TEM with tissue factor and TEM with ellagic acid. Indicators of RBC mass and platelet concentration were evaluated, and plasma coagulation tests were performed; data obtained were compared with results of TEM. For technical reasons, samples were not available from all dogs for all tests. 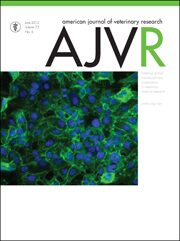