Precontrast transverse plane CT image at the level of the tympanic bullae (daggers) and the caudal margin of the pharyngeal lesion (asterisk) of the dog described in Figure 1. The tympanic bullae are fluid filled and sclerotic. Petrous temporal bone periosteal proliferation (arrowheads) is evident bilaterally and locally exuberant on the right. The image is displayed in a bone window (window width, 2,700 HU; window level, 350 HU) and a 2-mm slice thickness. 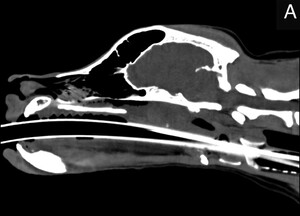 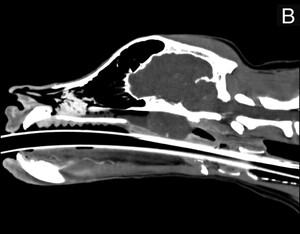 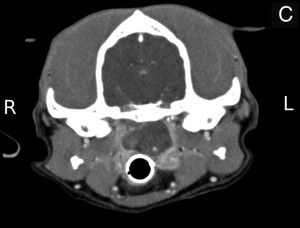 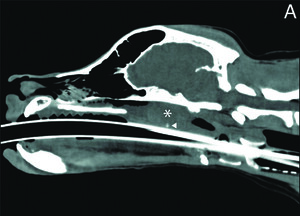 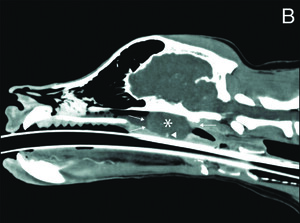 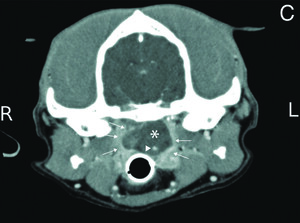 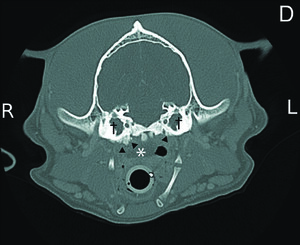 A 5-year-old 24.8-kg castrated male mixed-breed dog was presented because of an 8-week duration of stertor and a 3-week duration of mucopurulent to hemorrhagic nasal discharge. At presentation, the dog was on day 14 of a course of marbofloxacin (2 mg/kg, PO, q 24 h) with no improvement noted at home. Results of prior bacterial culture and susceptibility testing yielded Pseudomonas sp susceptible to marbofloxacin. Patient history revealed travel to Arizona within the past 12 months.

On physical examination, the dog’s right eye was miotic with ptosis and an elevated third eyelid. There was right-sided mucopurulent nasal discharge with minimal nasal airflow and severe stertor evident. Heart rate was 50 beats/min; no murmurs or arrhythmias were auscultated. The dog was quiet but alert and responsive. The remaining findings on physical examination were unremarkable. Results of a CBC count and plasma biochemical analyses performed within 2 weeks before presentation showed eosinophilia (1,886 eosinophils/µL; reference range, 0 to 1,500 eosinophils/µL) with the remainder within reference limits. Results for prothrombin time and partial thromboplastin time performed the day of presentation were within reference limits. Based on the history and clinical examination findings, a head CT (Aquillion 64-slice CT system, Canon; Figure 1) followed by rhinoscopy was recommended.

Computed tomography was performed before and after administration of contrast medium (Omnipaque, GE Healthcare; 240 mg I/L; 2.75 mL/kg, IV). On precontrast CT, there was a large (approx 5 X 3 X 2.5-cm) mostly homogenously attenuating lesion with an average area attenuation of 42.81 HU (Figure 2). Hounsfield units are measurements of radiodensity used to interpret CT images: distilled water at standard temperature and pressure is 0 HU, air is –1,000 HU, and structures such as bones and metal are at least 1,000 HU. In this case, 42.81 HU was consistent with a soft tissue density or dense fluid (eg, pus or hemorrhage). It was centrally mildly hypodense in relation to the surrounding tissue. This lesion filled the nasopharynx and extended from the choanae rostrally to the bullae caudally. Within this region, there was a small, hyperattenuating focus, which raised concern for an underlying process such as dystrophic mineralization or a foreign body. On postcontrast CT, there was peripheral contrast enhancement of the lesion with minimal central enhancement (average, 49.63 HU), indicating low intralesional vascularity. Bilaterally, the tympanic bullae were sclerotic and contained homogenously attenuating fluid (Figure 3) with a marked periosteal reaction along the rostromedial aspect of the right petrous temporal bone where it was adjacent to the lesion. A mild periosteal reaction was seen along the rostromedial aspect of the left petrous temporal bone. The right pterygoid bone was slightly lytic (not shown). Bilateral otitis media was considered an incidental finding. It was suspected that the periosteal changes affecting the tympanic bullae were related to the lesion as there was a close association among the structures. The nasal cavity contained fluid within the turbinates with no destruction evident (not shown). There was no regional lymphadenopathy. Given the clinical history and imaging findings, our primary differential diagnoses for this mass lesion were an inflammatory process (such as a chronic foreign body, granuloma with necrotic tissue, or abscess formation), infectious process (such as a fungal granuloma), or, less likely, neoplasia.

During retroflex nasopharyngoscopy, the entire nasopharynx was seen to be filled with gray to white irregular tissue that was not adherent to the surrounding walls. Rostral traction of the soft palate with manual palpation dorsal to the palate removed a large piece of tissue that was approximately 3 X 3 X 4 cm. This tissue contained both necrotic and more viable appearing areas. After removal, the nasal choanae could be visualized normally; however, smaller pieces of abnormal tissue were still visible within the nasopharyngeal space. The mucosa in this region was friable with evidence of lymphoid follicles and chronic inflammation. Rhinoscopy of the nares only revealed mild erythema and mucoid discharge of the right nostril.

The removed tissue sample was submitted for histopathology, and results were indicative of a nasopharyngeal sarcoma, suspected to have been of perivascular wall origin. No further differentiating diagnostic procedures were performed to determine what type of perivascular wall tumor. Due to the tumor’s abnormal location, the general soft tissue sarcoma scale could not be applied appropriately. On microscopic analysis, the sample was a poorly demarcated neoplasm with evidence of packed spindle cells in haphazard streams and infrequent perivascular whirling. The surface of this tissue was extensively ulcerated with replacement by granulation tissue and fibrinosuppurative inflammation. Large areas of necrosis were evident within the deeper portions of the neoplasm.

The dog in the present study presented for further investigation of its upper airway disease, which was characterized by nasal discharge and stertor. To obtain the highest diagnostic yield, it was elected to proceed with general anesthesia for CT and rhinoscopy. Even with well-positioned radiography, nasal and nasopharyngeal disease can be difficult to diagnose. Therefore, cross-sectional imaging, such as a CT, is the modality of choice to characterize upper airway disease as it has excellent bone resolution and multiplanar imaging to assess the surrounding structures. Detecting bony lysis, particularly of vital structures, such as the cribriform plate, is better done via CT assessment as well. Although CT can be performed on sedated animals, this patient underwent general anesthesia because rhinoscopy was scheduled immediately following CT.1 Pharyngeal masses, including of the naso-, oro-, or laryngopharynx, may exhibit CT characteristics such as a mass effect, osteolysis of adjacent bone structure (common with carcinomas), moderate to marked heterogeneous contrast enhancement, and metastatic lymph node involvement (eg, retropharyngeal).2 Characteristics that may be suggestive of an aggressive neoplastic process include ill-defined margins, intracranial extension, and destruction of adjacent bone.3 On CT, our patient had a localized, generally homogenously attenuating lesion with minimal surrounding bony lysis and mild peripheral contrast enhancement. Based on its appearance on CT, the lesion was suspected to have been infectious or inflammatory processes such as an abscess, as these tend to have minimal to no central contrast enhancement and substantial peripheral contrast enhancement. Depending on the underlying cause, foreign body remnants may be visible. The hyperdense focus found in our patient raised concern for possible foreign material. Rhinoscopy and biopsy were indicated for further characterization, and ultimately biopsy was necessary for a final diagnosis.

In general, tumors of the nasal passages and sinonasal regions account for approximately 1% of all canine tumors.4,5 The majority of information available regarding pharyngeal masses suggests they are more commonly oropharyngeal in origin. The oropharynx is a common location in dogs for malignant and benign neoplasms, accounting for 6% to 7% of all oral cancers.2,4 The most common tumors, in order of decreasing frequency, include malignant melanoma, squamous cell carcinoma, and fibrosarcoma.2,4 In comparison, primary nasopharyngeal neoplasms are considered rare, and to our knowledge, there are no reported prevalences. Tumors within the nasopharynx are generally nasal adenocarcinomas that have invaded into this location.2 The clinical signs of nasopharyngeal disease are often upper respiratory in origin and commonly include uni- or bilateral nasal discharge, decreased nasal airflow, sneezing, and stertor.6 Because nasopharyngeal tumors are often extensions of nasal tumors, similar clinical signs will be seen.

Perivascular wall tumors (PWTs) are a subcategory of soft tissue sarcomas that were formerly referred to as hemangiopericytoma but have been reclassified and are derived from the mural cells of blood vessels, excluding the endothelial lining. This new category includes hemangiopericytomas, glomus tumors, myopericytomas, angioleiomyoma, angiosarcoma, angiomyofibroblastoma, and angiofibroma. Distinguishing between the different types requires immunohistochemical and immunofluorescence studies,7 which were not performed in this case. Generally, PWTs are found as a single cutaneous or subcutaneous mass.8 Due to the large spectrum of masses incorporated in this new categorization, their full biological behavior is not understood. However, findings suggest that canine PWTs have a high tendency to recur locally rather than metastasize.7 To our knowledge, only 2 other reports9,10 of PWTs in the nasal or pharyngeal area can be found. In 1 report,9 angioleiomyosarcoma was found in the nasal vestibule of an 11-year-old female German Shepherd Dog. That dog had a history of intermittent unilateral epistaxis and stertorous breathing, and CT revealed a contrast-enhancing mass with an attachment near the root of the left maxillary canine tooth. There was no evidence or invasion of surrounding soft tissue structures or bones.9 In the second report,10 an angioleiomyoma was found in the nasopharynx of a 1-year-old male Golden Retriever; the mass was initially excised but recurred approximately 4 months later and had to be excised again.

Findings for the dog of the present report highlighted the importance of remembering that although certain neoplasias have predilection sites, they can occur in a variety of locations. In addition, although certain lesions may look infectious, abscessed, or necrotic, neoplasia should always remain on the differential list as a possibility.