Same images as Figure 1. A—There is a soft tissue–attenuating, heterogeneously contrast-enhancing mass (star) ventral to the right globe. B—Regional osteolysis (open circle) is evident with extension of the mass axially into the ventral aspect of the right nasal cavity, and regional osseous proliferation (star) is evident along the right zygomatic arch.

Same images as Figure 1. A—There is a soft tissue–attenuating, heterogeneously contrast-enhancing mass (star) ventral to the right globe. B—Regional osteolysis (open circle) is evident with extension of the mass axially into the ventral aspect of the right nasal cavity, and regional osseous proliferation (star) is evident along the right zygomatic arch. 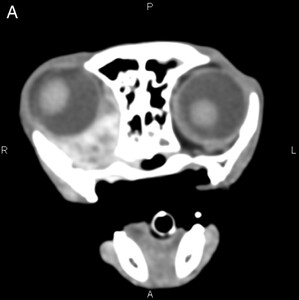 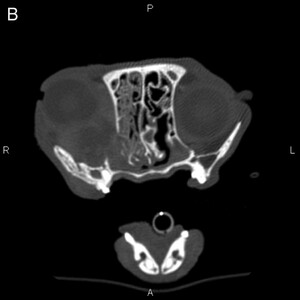 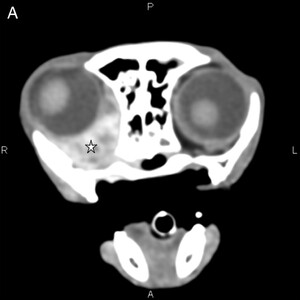 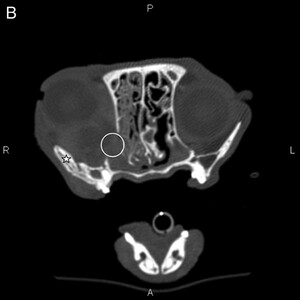 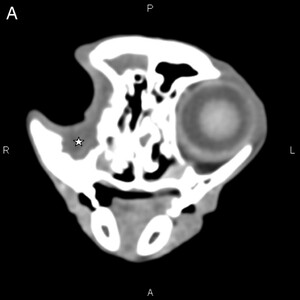 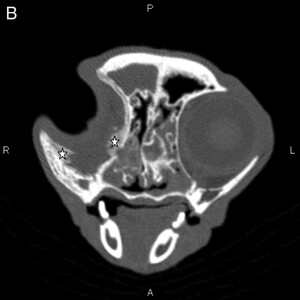 A 3-year-old 4.5-kg castrated male domestic shorthair cat was referred to a northeastern veterinary specialty hospital for right-sided retrobulbar and periorbital swelling. The cat had been evaluated approximately 1 year prior by a different hospital for retrobulbar disease. At that time, the cat was prescribed clindamycin (25 mg/mL; 1.6 mL, PO, q 12 h for 7 days) and meloxicam (0.5 mg/mL; 0.08 mL, PO, q 24 h for 7 days). Results of bloodwork were unremarkable other than high globulin concentration (6.2 g/dL; reference range, 2.8 to 5.4 g/dL). At that time, CT had been performed and revealed expansion of the third eyelid and associated tissues. A fluid pocket was identified and aspirated, and a sample of the fluid had been submitted for bacterial culture. Culture revealed moderate growth of Pseudomonas aeruginosa sensitive to amikacin, enrofloxacin, gentamicin, and marbofloxacin. Pradofloxacin (25 mg/mL; 0.8 mL, PO, q 24 h) had been prescribed for an unknown duration. The ocular disease resolved, and the patient did well for 1 year. When signs recurred, pradofloxacin was again prescribed by the primary veterinarian at the same dosage; however, ocular signs did not improve. Therefore, the patient was referred.

On referral examination, the cat’s right eye (ocular dexter [OD]) had exophthalmos, an elevated and thickened nictitans, and decreased retropulsion. The right eye was visual with normal light reflexes despite high intraocular pressure (50 mm Hg; TONOVET Plus, iCare Finland Oy). Biomicroscopy and fundic examinations of both the right and left eye were normal. A focal area of gingival ulceration and hyperemia was noticed around the patient’s upper right second premolar tooth. Topical 2% dorzolamide and 0.5% timolol ophthalmic solution (1 drop, OD, q 8 h) was prescribed, and pradofloxacin was continued. A second CT scan was recommended at that time but not performed.

Two months later, the patient was presented with worsening ocular signs. Ocular examination revealed right-sided exophthalmos, lateral strabismus, decreased retropulsion, and an elevated third eyelid with copious amounts of mucopurulent discharge. The intraocular pressure in the right eye was 30 mm Hg. The patient underwent CT of the head before and after administration of contrast medium (iohexol, 350 mg/mL, 9.5 mL, IV; Figure 1).

The CT examination revealed a soft tissue–attenuating, heterogeneously contrast-enhancing mass ventral and axial to the right globe causing dorsal and abaxial displacement of the globe (Figure 2). Multiple foci of osteolysis were noted regionally (including within the right maxilla and palatine bones) with extension of the aforementioned mass axially into the ventral aspect of the right nasal cavity and right choana. Osseous proliferation was also noted multifocally in the region of the mass, including along the right maxilla and circumferentially along most of the right zygomatic arch. Nasal turbinate lysis and destruction were noted multifocally throughout both the right and left nasal cavities. No obvious cribriform plate osteolysis or abnormal intracranial contrast enhancement was appreciated. Moderate right mandibular and mild to moderate right medial retropharyngeal lymphadenopathy was noted.

Exenteration with drain placement was performed to alleviate discomfort and to obtain samples for culture. During surgery, firm caseous material was noted within the surrounding muscle and orbital tissues, and a large plaque was noted along the orbital floor and extending into the maxillary region.

Bacterial culture revealed heavy growth of Pseudomonas aeruginosa with sensitivity to only amikacin and gentamicin. Amikacin (250 mg/mL, 65 mg, SC, q 24 h for 30 days) and lactated Ringer solution (100 mL, SC, q 24 h for 30 days) were administered. Blood creatinine concentration measurement and urinalyses (evaluated for casts) were performed every 3 days to monitor for potential negative effects of amikacin on kidney function. During that time, all swelling and mucopurulent discharge from the orbit resolved. A CT was repeated 2 weeks after completion of amikacin treatment, and most of the mass previously noted ventral to the right globe (exenterated previously) was no longer present (Figure 3). There was progression of the previously noted regional osseous proliferation but no substantial progression of osteolysis. Lymphadenopathy had decreased in severity. There was mild progression of right frontal sinusitis and similar bilateral turbinate osteolysis and destruction within the nasal cavities suggestive of chronic rhinitis. Approximately 1 year later, the patient was reported as remaining disease free and doing well, despite occasional mucoserous nasal discharge.

Orbital cellulitis is relatively uncommon in feline species and oftentimes causes unilateral exophthalmos, nictitating membrane protrusion, and mucopurulent discharge, as our patient had. Causes of orbital cellulitis include penetrating ocular trauma, migration from the oral cavity through the pterygopalatine fossa, extension from the sinus or nasal cavity, or dissemination from the blood.1–3

Imaging modalities utilized to help evaluate the orbital space in domestic species include ultrasonography, CT, and MRI. Unlike ultrasonography, CT has the benefit of evaluating structures beyond the orbit and is more sensitive for bony destruction. Adjacent to the soft tissue mass in our patient was regional osteolysis and osseous proliferation extending from the orbit into the maxillary region with associated lymphadenopathy. A focal mass effect, indistinct margins, bony lysis, and extra-orbital involvement on CT imaging are highly suggestive of malignancy.4,5 Bony lysis specifically on CT scan has been reported in 82% of cats with orbital malignancy.4 Our patient’s clinical history and previous diagnostic results, however, were more suggestive of an extensive, chronic, aggressive P aeruginosa infection thought to have been secondary to penetration of an unidentified oral foreign body, given the extent of disease through the maxillary region. A resistant P aeruginosa infection was confirmed via culture.

A study2 evaluating the most common bacterial isolates in cats with orbital abscesses or cellulitis included Pasteurella and Bacteroides spp. Pseudomonas aeruginosa is a common gram-negative bacterial isolate more commonly associated with the oral microflora of cats, which may help to explain its origin in our patient.6 A study7 evaluating antimicrobial susceptibility of P aeruginosa involved in ocular surface disease found imipenem followed by amikacin as the most effective in vitro antimicrobial. Exenteration combined with judicious amikacin treatment proved an effective strategy for our patient, allowing for clinical and radiographic resolution of signs with only minor lingering effects from sinus and turbinate damage.