Two different lateral oblique radiographic views of the left mandible and other structures of the head of a 5-month-old 20.9-kg sexually intact male pit bull–type dog evaluated because of swelling over the left mandible.

Two different lateral oblique radiographic views of the left mandible and other structures of the head of a 5-month-old 20.9-kg sexually intact male pit bull–type dog evaluated because of swelling over the left mandible.

Same radiographic images as in Figure 1. The expansile, lytic, and septated lesion (identified by white arrowheads) affects most of the left mandible. Note associated cortical thinning along with a mild adjacent periosteal reaction (white arrow) and surrounding soft tissue swelling.

Same radiographic images as in Figure 1. The expansile, lytic, and septated lesion (identified by white arrowheads) affects most of the left mandible. Note associated cortical thinning along with a mild adjacent periosteal reaction (white arrow) and surrounding soft tissue swelling. 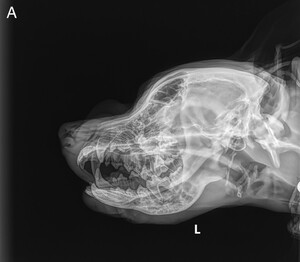 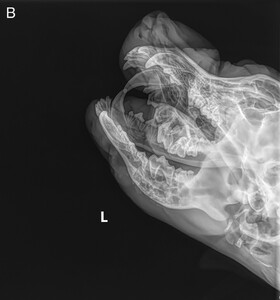 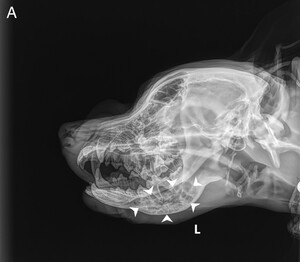 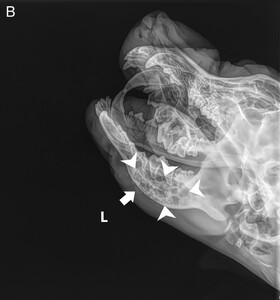 A 5-month-old 20.9-kg sexually intact male pit bull–type dog was presented to Cascade Veterinary Clinic with a swelling over the left mandible. The patient had a history of chewing sticks as recently as 2 days prior to presentation. Physical examination revealed profuse swelling over the left mandible with marked odor and signs of tenderness on palpation. The patient was sedated with 0.2 mg/kg butorphanol, 3 mg/kg ketamine, and 7.5 µg/kg dexmedetomidine IV, and a full oral examination was performed. The caudal portion of the left mandible was palpably thickened and had serous discharge from a large pocket in the gingiva around the left mandibular fourth premolar tooth (P4) and first molar tooth (M1) that contained granular material grossly suggestive of bone fragments. Dental radiography of the region showed widened pulp cavities of the roots of the left mandibular P4 and M1. Samples for biopsy and culture were collected from the lesion, skull radiography was performed (Figure 1), and the patient was recovered without complication.

Radiography revealed an expansile, well-demarcated, and septated lesion affecting the majority of the body of the left mandible, extending from approximately the level of the distal aspect of the second premolar to the last molar, with mild periosteal reaction on the ventral aspect (Figure 2). The lesion surrounded multiple tooth roots, with the teeth themselves appearing unremarkable. There was associated cortical thinning along with adjacent soft tissue swelling.

Based on the radiographic appearance of the bony lesion, as well as the patient’s history and signalment, differential diagnoses included bacterial or fungal osteomyelitis and benign processes such as an aneurysmal bone cyst (ABC). A neoplastic process like osteosarcoma was also proposed given its bimodal age distribution, though the patient was substantially younger than the typical 18- to 24-month age of juvenile onset. An additional process of mandibular periostitis ossificans was considered possible but less likely, as the lesion was largely lytic without characteristic ossified periosteal layers.

Histopathology of the lesion revealed marked hemorrhage with mixed inflammation, bony remodeling, spindle cell proliferation, giant cells, osteoclasts, and necrosis. These findings, in conjunction with the radiographic appearance of the lesion, were consistent with an ABC. Additionally, there was a notable component of neutrophilic infiltration. This was not typical of an ABC and suggested concurrent osteomyelitis, though a sterile process remained possible.

Bacterial cultures grew Staphylococcus pseudintermedius, which was susceptible to most antimicrobials evaluated. The patient was prescribed amoxicillin-clavulanic acid and clindamycin, and surgery including a mandibulectomy or debulking curettage procedure was recommended to the owner. The patient was reportedly doing well at home 12 weeks following medical management of the lesion.

The young dog in this report was presented with a tender swelling of the mandible, and an infectious etiology like osteomyelitis was a top consideration based on the inflammation, odor, serous discharge, and radiographic pattern. Osteomyelitis can present radiographically with osteolysis, periosteal proliferation, and sometimes an involucrum with associated sequestrum of bone is visualized. Many cases of osteomyelitis in small animal medicine are secondary to bone fracture, and many develop soft tissue draining tracts exterior to the lesion.1 Skull radiography performed for the dog of the present report could not rule out osteomyelitis; however, the markedly expansile and predominantly lytic appearance raised concern for a primary cystic lesion and led to an expansion of the differential diagnoses. Radiography combined with histopathology of the lesion proved indispensable in reaching the diagnosis of ABC in this case.

Expansile lesions of the mandible can be categorized into odontogenic or nonodontogenic in nature. Odontogenic lesions with radiographically cystic patterns are often associated with unerupted teeth and include dentigerous cysts, ameloblastomas, and rarely osteosarcoma.2 Nonodontogenic lesions that can present as intramedullary, lucent, expansile lesions with cortical bone thinning include fibrous dysplasia, giant cell reparative cysts, giant cell granulomas, simple bone cysts, and ABCs.3 Based on this patient’s age, malignant neoplasms were considered less likely but include chondrosarcoma, fibrosarcoma, and osteosarcoma.3

In veterinary literature, ABCs have been reported in equine, canine, and feline patients; they commonly affect the metaphysis or diaphysis of long bones but have been reported in the pelvis, vertebrae, and ribs.4 The term aneurysmal was used to describe the abnormal ballooned-out appearance of these lesions, similar to the distension in an arterial aneurysm secondary to weakened vessel walls.4,5 They can arise as primary lesions, or secondary to osteoblastomas, fibrous dysplasia, giant cell tumors, eosinophilic granulomas, and other benign neoplasms. Human literature notes that around 30% of ABCs are secondary in nature.6 Primary lesions have been found to have a rearrangement of the USP6 oncogene, suggesting a neoplastic etiology.3 However, the pathogenesis of primary ABCs remains unknown, and proposed theories include underlying trauma or hematoma formation secondary to trauma.3–5 Given this patient’s history of chewing sticks, trauma as an initiating factor is considered highly likely.

Histologically and radiographically, primary and secondary lesions are indistinguishable. Aneurysmal bone cysts are radiographically described in humans as well-marginated, expansile, osteolytic lesions that are often eccentric when originating from long bones. In some cases, trabecular or flocculent densities are noted within the radiolucent cystic structure.5 In this patient’s case, there was an overt trabecular pattern to the cystic cavitation most consistent with this description.

In human ABCs, CT shows a thin-walled cystic structure, often with a discernible pseudo-septum within the cystic lumen. This modality has shown success for surgical planning and to assess risk of fracture in human patients.6 In humans, MRI shows a fluid-signal on T2-weighted sequences and confirms the cystic nature of the lesion.6

Treatment for ABCs involves addressing the underlying lesion when applicable. Curettage and bone grafting used in treatment of primary lesions have been reported with success, though local recurrence rate ranges from 20% to 70%.3 When planning for surgical resection of the bony lesion, the extent of osteolysis involved should strongly be considered, as pathologic fractures and neuromuscular damage can worsen prognosis.4 Though documented treatments in veterinary medicine are limited, studies from human literature also suggest that radiation therapy is effective, isolated embolization techniques for specific locations can work, and various intracystic infusions (eg, Ethibloc, polidocanol, zoledronic acid, or absolute alcohol) have shown success comparable to surgical resection.6