Same images as in Figure 1. There is marked thinning of the cerebellar and cerebral cortices, with ventriculomegaly (star) and an increased amount of CSF signal (arrows) within the sulci surrounding the cerebellum (A) and cerebrum (B–D), compatible with marked cerebellar and cerebral atrophy. There was no convincing signal intensity or contrast enhancement within the brain parenchyma or surrounding meninges (D). There was also no evidence of muscular lesions (B–D). 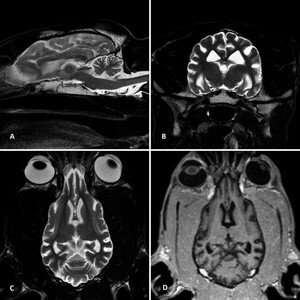 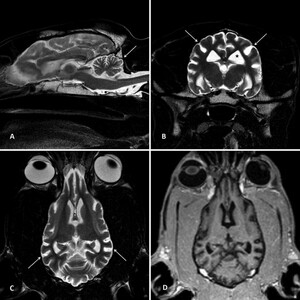 A 2-year-old 29-kg castrated male Greyhound, rescued from Ireland, was referred for evaluation of progressive generalized vestibulocerebellar ataxia. The neurologic signs were first observed 6 weeks earlier, starting with pelvic limb weakness that quickly progressed to ambulatory tetraparesis and vestibulocerebellar ataxia. Visual deficits and behavioral changes (anxiety) were also reported during the progression of the clinical signs.

The MRI revealed subjective thinning of the cerebral and cerebellar cortices, bilateral ventriculomegaly of the lateral ventricles (star in Figure 2) and the third and fourth ventricle to a lesser degree, enlargement of both olfactory recesses, and increased amount of cerebrospinal fluid (CSF) within the sulci surrounding the cerebral gyri and cerebellar folia (arrows in Figure 2), compatible with subjective marked cerebral and cerebellar atrophy. There were no convincing signal intensity changes within the brain parenchyma, as well as no evidence of increased intraparenchymal or meningeal contrast enhancement. No other intracranial abnormalities were found. The observed extracranial structures were considered normal; no muscular lesions were identified, and the medial retropharyngeal and mandibular lymph nodes were considered of normal size. On the basis of signalment, clinical signs, and MRI findings, degenerative brain disease or meningoencephalitis of unknown etiology was considered the main differential diagnosis.

Following MRI, a cisternal CSF sample was collected and analyzed; the protein concentration (37.1 mg/dL; reference < 25mg/dL) and nucleated cell count (11 cells/µL, reference < 5 cells/µL) were high. Cytologic examination revealed a mixed pleocytosis, with predominance of neutrophils but no infectious agents; however, neutrophils appeared with karyolitic nuclei and with numerous small clear punctate vacuoles in the cytoplasm.

Based on the MRI findings and CSF analysis, a blood sample was submitted for serologic testing, the results of which indicated that the dog had a serum anti-Neospora antibody titer of ≥ 1:800 (reference range, < 1:50) and negative antibody titers (IgM and IgG) for Toxoplasma gondii.

Given the clinical and imaging findings, a final diagnosis of meningoencephalitis due to neosporosis was made. The owners declined further treatment regardless of the guarded to good prognosis, and the patient was euthanized. Postmortem examination of the brain was performed. Macroscopic examination of the brain on cross sections, after formalin fixation, only showed mild diffuse dilation of the lateral ventricles with otherwise unremarkable gross appearance.

Histopathology was performed on tissue sections of frontal and occipital cortex, hippocampus, thalamus, basal nuclei, cerebellum, and brain stem. Representative sections of liver and eyes (including periorbital muscles and soft tissues) were obtained to exclude the presence of a lysosomal storage disease and stained by means of Periodic acid–Schiff (PAS) and Masson’s trichrome stains. Luxol fast blue (LFB) stain was also used on all central nervous system sections to assess the presence of areas of demyelination.

A disseminated neuropil hypercellularity, with astrocytosis and astrogliosis, multifocally organized in clusters, was observed with occasional evident glial nodules. In all the examined areas of the forebrain, it was possible to identify multifocal perivascular cuffing, mainly composed of histiocytes, with lymphocytes and plasma cells to a lesser extent associated with few necrotic neurons. Mild to moderate diffuse lymphoplasmacytic and histiocytic meningitis with multifocal areas of hemorrhage was noted. Occasional protozoal cysts with myriads of 1-µm zoites, morphologically compatible with Neospora caninum, were found in the right hippocampus and thalamus and the left basal nuclei and forebrain cortex. Protozoal cysts were either intact or degenerated with free zoites observed in the neuropil often associated with glial infiltrates. Examination of the cerebellar cortex showed moderate granular cell layer depletion and marked gliosis in the molecular layer in proximity to areas of marked histiocytic meningitis. The histological features were consistent with cerebral neosporosis, showing granulomatous meningoencephalitis with intralesional protozoal cysts. There was no evidence of a lysosomal storage disorder in this case (PAS and Masson’s trichrome special stains), and LFB stain did not show areas of demyelination throughout the brain samples examined.

The goal of the present case report is to highlight unusual MRI features of neosporosis with CNS involvement, such as lack of meningeal enhancement and widespread cerebral and cerebellar atrophy. Neospora caninum is a protozoan parasite with worldwide distribution. This protozoon is mainly found within the CNS, peripheral nerve roots, and skeletal muscle, although the parasite has been described in several different body tissues, including heart, lungs, liver, kidney, adrenal glands, uterus eye, and muscularis layer of the esophagus.1,2

The MRI features of neosporosis reported in the current literature consist of nonspecific, diffuse multifocal inflammatory infiltrates in the central nervous system and striated muscle. However, a strong cerebellar involvement has yet again been reported as a major feature, with cerebellar atrophy as the only abnormality often observed. The subjective cerebellar atrophy described in the literature, ranging from mild to severe, occurs as bilateral and symmetric changes, where widening of the sulci between the cerebellar folia is evident.3,4 Morphometric parameters to detect cerebellar atrophy have been described, using the cross-sectional brainstem-to-cerebellum ratio and forebrain-to-cerebellar ratio.5 The brainstem-to-cerebellum ratio technique particularly has a described sensitivity and specificity of 100%.5 However, these techniques were not reported to be used in any of the described dogs with neosporosis in the literature3,4 and were also not used in this case report.

Other changes, not present in all dogs with neosporosis, included decreased cerebellar white-gray matter distinction, cerebellar intraparenchymal FLAIR hyperintensities, meningeal thickening, and contrast enhancement around the cerebellum, brainstem, or diencephalon.1,3,4 In a small percentage of dogs, MRI abnormalities will not primarily affect the cerebellum.4,6 Single or multifocal brain lesions and diffuse rostro- and caudotentorial leptomeningeal thickening have been reported.4,6

Extracranial abnormalities have also been reported in neosporosis cases. These reported changes are limited to the temporalis and masseter muscles and consist of moderate muscle atrophy and T2W heterogenous hyperintensities, with contrast enhancement.3

The diagnostic imaging of the present case showed signs of marked cerebral and cerebellar atrophy, with no evidence of intraparenchymal signal intensity changes or meningeal enhancement. These observed changes closely resemble the imaging features of a degenerative disorder, such as neuronal ceroid lipofuscinosis.7 However, the diagnosis of neosporosis was reached based on a positive serology testing and by direct histopathologic observation of a granulomatous meningoencephalitis with intralesional protozoal within the central nervous system. Interestingly, although there was histopathologic evidence of disseminated intraparenchymal hypercellularity and protozoal cysts, and minimal to moderate meningitis with multifocal areas of hemorrhage, there was no apparent correlation with the MRI finding, as there was no evidence of intraparenchymal signal changes or meningeal contrast enhancement.

The clinical signs of the disease described in the literature vary with the distribution of the parasite within the affected tissues. In agreement with the most common MRI findings, older dogs are presented generally with clinical signs related to multifocal CNS disease, with strong cerebellar involvement, and polymyositis.1,3,4

In conclusion, this case report describes a set of uncommon MRI findings in a dog with serologically and histopathologically confirmed neosporosis, with only few MRI features common to what was previously described in the literature. Thus, the diagnosis of Neospora caninum should be considered when, in addition to cerebellar atrophy and cerebral atrophy, lack of meningeal enhancement and absence of intraparenchymal or muscular changes are observed.