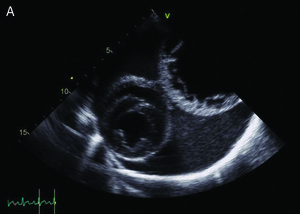 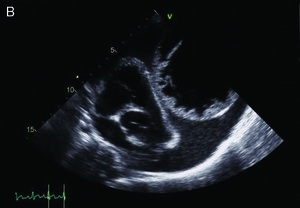 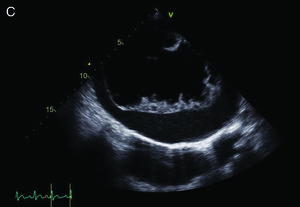 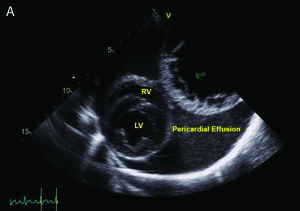 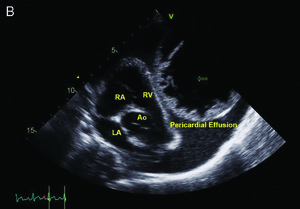 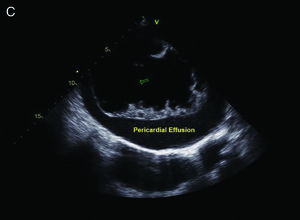 An 8-month-old 31.1-kg sexually intact male Weimaraner was presented to BluePearl Specialty and Emergency Center, Southfield, Michigan for evaluation of a 3-day history of progressive hyporexia and abdominal distension. The dog had a history of abdominal hernia repair surgery at 2 months of age performed while in the possession of the breeder in Arizona.

On physical examination the dog was tachycardic (heart rate, 192 beats/min) and had muffled heart sounds and moderate abdominal distension with a ballotable fluid wave. Herniated tissue and crepitus were palpated on ventral midline at the level of the umbilicus. A focused ultrasonographic assessment of the thorax aimed at free fluid evaluation revealed a large volume of pericardial effusion (not shown). Thoracic and abdominal radiography revealed a markedly enlarged globoid cardiac silhouette and moderate loss of serosal detail (not shown). No peritoneopericardial mesothelial remnant was identified. Abdominal ultrasonography revealed mild generalized hepatomegaly, with distension of the caudal vena cava and hepatic veins and mild anechoic abdominal effusion (not shown). Transthoracic echocardiography was performed (Figure 1).

There was moderate to severe, echogenic pericardial effusion. Caudal to the heart was a large (8.5 X 12.6 cm) thick-walled cystic structure that was filled with anechoic fluid and that had mobile finger-like fibrinous projections extending inward from the walls (Figure 2). There was collapse of the heart chambers on the right side and decreased ventricular dimensions in end-diastole, consistent with cardiac tamponade. No other echocardiographic abnormalities were identified.

An exploratory laparotomy and median sternotomy were performed. Approximately 2,000 mL of clear, straw-colored fluid was removed from the abdomen. The quadrate lobe of the liver was adhered to the diaphragm and was liberated using electrocautery. A small rent (approx 2 cm in diameter) was present in the ventral central aspect of the diaphragm, and a distended pericardium was visualized through the rent. The pericardium was excised, and 800 mL of serosanguinous fluid was suctioned from the pericardial sac. Median sternotomy was performed. A large cystic structure was identified within the pericardial sac, to the left of the apex of the heart, attached to the caudal aspect of the parietal pericardium. The most ventral 2 cm of the pericardium and diaphragm was continuous by means of the mediastinum and normal fibrotendinous attachments. The area of diaphragmatic herniation was visualized. The pericardial sac and the cystic structure were removed with the cystic structure intact. The epicardium appeared irregular. Samples of the pericardial fluid and mass were submitted for aerobic microbial culture. A resected 4 X 13-cm section of pericardial tissue including the mass was submitted for histopathology. Postoperative management included chest tube drainage, IV fluids with 100 mg of ketamine/L and 15 mg of morphine/L ran at maintenance rate, and IV ticarcillin-clavulanate (940 mg, IV, q 6 h). The recovery from surgery was uneventful, and the patient is clinically doing well at the time of publication.

Histopathology of the cystic structure revealed marked granulomatous avascular inflammation, marked fibroplasia and neovascularization, multifocal neutrophilic infiltrates, and segmental cavitation and peripheral encapsulation. No histopathologic abnormalities of the adjacent pericardial tissue were reported. Microscopic findings were consistent with a chronic seroma given the pseudocapsule and lack of secretory epithelium; however, an infectious component could not be fully ruled out given the marked inflammatory component. Results of assessments with special stains and aerobic microbial culture were negative for fungal and bacterial organisms.

To the author’s knowledge there is no current literature describing pericardial seroma formation in veterinary medicine. In human medicine, there is a single case report describing unusual pericardial seroma formation mimicking cardiac tamponade in an infant following placement of a left ventricular assistance device containing a polytetra-fluoroethylene graft component for treatment of severe dilated cardiomyopathy.2 Alternatively, pericardial cysts are infrequently reported in both humans and animals. In human medicine, most pericardial cysts are congenital and most (50% to 75%) are incidental findings on thoracic radiography in asymptomatic patients, not requiring surgical intervention.3,4 Conversely, in animals, most reported cases are of patients with signs of cardiac tamponade, and pericardial cysts have been found to occur in association with, and possibly as a result of, congenital PPDH defects or entrapment of omentum into the pericardial sac during embryology.4

Findings for the dog of the present report highlighted the practical use of emergency focused assessment ultrasonography aimed at free fluid evaluation, which was used to identify pericardial effusion in this dog. This case also demonstrated the limitations of thoracic radiography in a dog with pericardial effusion, the underlying cause for which cannot be identified radiographically in most cases. To our knowledge, thoracic radiographic results have been variable for dogs with pericardial cysts (eg, some had a mass-like protuberance obscuring the heart, whereas most had nondescript findings of a globoid cardiac silhouette5). In dogs with pericardial effusion, echocardiography is by far the most useful imaging modality and can be used to diagnose cardiac tamponade and identify sources of pericardial effusion including intracardiac or heart-base masses, infectious or inflammatory pericarditis, right heart failure, left atrial rupture, and more.6 For the dog of the present report, abdominal ultrasonography was used to investigate for underlying systemic, infectious, structural, anatomic, or neoplastic sources of pericardial effusion. Retrospectively, CT may have been helpful for further characterization of the cystic structure; however, this was not performed because exploratory surgery was recommended for therapeutic management, regardless of further imaging.

In the present case, histopathology of the aberrant structure within the pericardium was considered a chronic seroma, not a pericardial cyst, due to the absence of secretory epithelial lining. It is challenging to justify the presence of a seroma in this location. Unfortunately, a complete history was not available to ascertain the anatomic information or surgical technique used for the prior abdominal hernia repair at 2 months of age in this dog. Given the lack of full medical history, it was plausible that trauma to the pericardium could have been sustained during this dog’s previous exploratory laparotomy if a diaphragmatic hernia defect was present. This is especially true if the procedure was an attempted diaphragmatic hernia or PPDH repair. The adhesions of the liver to the diaphragm identified during the latest surgery in this case supported this theory. Although this was theoretically possible, it seemed less likely given the absence of a large surgical scar, more substantial internal adhesions, or scarring near the area of the diaphragm. Alternatively, the absence of a visible secretory epithelial lining on histopathology alone did not rule out a cyst. Therefore, it was also very possible that the aberrant structure was a congenital pericardial cyst secondary to entrapment of omentum within the pericardial sac during embryology. Finally, although aerobic cultures of the fluid and aberrant tissue were negative for organisms, an abscess cannot be entirely ruled out. This was especially true given the large inflammatory component of the sample. Fungal or anaerobic bacterial organisms remained considerations, especially given the dog’s travel history from Arizona. This case demonstrated a benign intrapericardial seroma as a unique and rare differential for pericardial effusion and cardiac tamponade in a young canine patient.