Right lateral (A) and ventrodorsal (B) abdominal radiographic images of a 7-year-old 26-kg castrated male Siberian Husky that was presented to the Ross University Veterinary Clinic for metastatic evaluation after having undergone surgical removal of a sebaceous gland adenocarcinoma from digit 3 of the left pelvic limb 18 months earlier.

Right lateral (A) and ventrodorsal (B) abdominal radiographic images of a 7-year-old 26-kg castrated male Siberian Husky that was presented to the Ross University Veterinary Clinic for metastatic evaluation after having undergone surgical removal of a sebaceous gland adenocarcinoma from digit 3 of the left pelvic limb 18 months earlier.

Same images as in Figure 1. A single, ovoid, homogenous soft tissue opaque mass with undulant margins is in the central and ventral aspect of the abdomen. A—The mass (white arrows) silhouettes with the ventral abdominal wall and tail of the spleen; organ involvement is difficult to evaluate. B—The mass (white arrows) lies slightly right of midline, and the spleen (black arrows) is adjacent to the abdominal wall.

Same images as in Figure 1. A single, ovoid, homogenous soft tissue opaque mass with undulant margins is in the central and ventral aspect of the abdomen. A—The mass (white arrows) silhouettes with the ventral abdominal wall and tail of the spleen; organ involvement is difficult to evaluate. B—The mass (white arrows) lies slightly right of midline, and the spleen (black arrows) is adjacent to the abdominal wall.

Obliqued ventrodorsal abdominal radiographic image of the same dog showing that the mass (black arrows) lies left of midline and the spleen (white arrows) lies adjacent to the left abdominal wall. A clear delineation can be seen between the mass and the splenic tail, which appear separate and discretely margined with no overlapping, making splenic involvement unlikely.

Transverse abdominal ultrasonographic image of the dog described in Figure 1, showing a rounded, heterogeneous mass (red arrows) with irregular margins slightly right of midline in the mid abdomen, cranial to the urinary bladder and caudal to the right kidney. The mass has a hypoechoic outer band and a more hyperechoic center, appears continuous with the body wall, and causes an outward bulging (yellow line and white arrows). The scales along the top and side of the image are in centimeters. 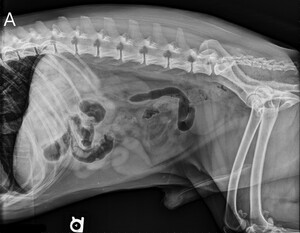 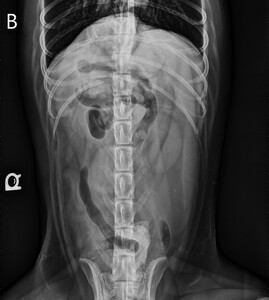 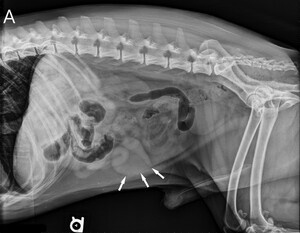 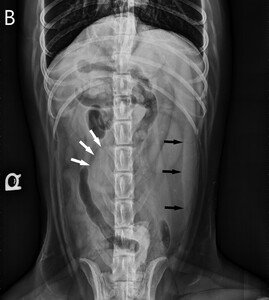 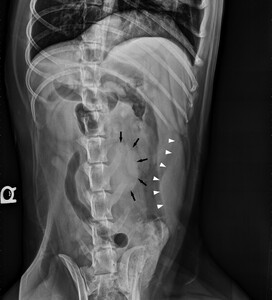 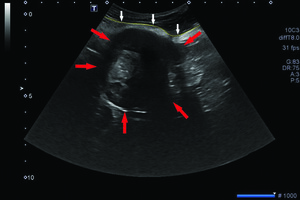 A 7-year-old 26-kg castrated male Siberian Husky was presented to the Ross University Veterinary Clinic for evaluation of a dermal lesion on digit 4 of the left thoracic limb. The dog had previously been diagnosed with and underwent surgery for a sebaceous gland adenocarcinoma on digit 3 of the left pelvic limb, with ipsilateral popliteal lymphadenectomy 18 months prior. Histologic evaluation following surgery confirmed metastasis to the regional popliteal lymph node and complete excision of the digital mass.

On physical examination, the dog was bright, alert, and responsive with mild tachycardia (pulse, 136 beats/min; reference range [RR], 70 to 120 beats/min). Other vital signs were within reference limits. The owner reported the dog to be clinically normal with no other concerns. An approximately 0.5-cm-diameter raised erythematous lesion was observed on the palmar aspect of digit 4 of the left thoracic limb immediately adjacent to the digital pad. Based on the size and location of the dermal lesion as well as the aggressive temperament of the dog, fine-needle aspirate samples of the lesion could not be obtained during the original presentation. Serum biochemical abnormalities included high alkaline phosphatase activity (248 U/L; RR, 20 to 150 U/L). Mild thrombocytopenia (143 X 109 thrombocytes/L; RR, 165 X 109 to 500 X 109 thrombocytes/L) and acanthocytosis (3+) were detected on a CBC, and platelet inclusions suggestive of Anaplasma platys were observed on a blood smear.

The patient was returned 3 days later and underwent sedation for radiography of the thorax as a metastatic screen (not pictured) and radiography of the left manus (not pictured), where the de novo lesion was observed. No imaging abnormalities of the thorax or left manus were reported by the board-certified radiologist, and no gross lesion was observable on digit 4 of the left thoracic limb at that time; therefore, cytopathology was not performed. The patient was returned 5 weeks later, at the request of the owner, for evaluation of the abdomen, at which time orthogonal abdominal radiography was performed (Figure 1).

Abdominal radiography revealed a single, ovoid, homogenous, soft tissue opaque mass (approx 5 cm in diameter) with well-defined undulant margins in the central and ventral aspect of the abdomen (Figure 2). On the right lateral view, there was focal silhouetting of the mass with the ventral abdominal wall. The splenic tail was partially visible and was superimposed over the mass in the same location. Although there was the presence of wet coat artifact superimposed over the abdomen, the serosal detail was preserved and adequate. On the ventrodorsal view, the mass was slightly to the right of midline, and the spleen was located adjacent to the left abdominal wall. Based on the apparent close association of the mass with the spleen, an additional obliqued ventrodorsal view was obtained for further evaluation, on which the midline mass and splenic tail were separate and discretely margined with no overlapping (Figure 3).

The primary differential diagnoses for the soft tissue dense abdominal mass based on radiographic findings were a mesenteric or abdominal body wall mass such as a mesenteric sarcoma or other neoplasia. Other tissues of origin that could not be excluded based on the radiographic study alone included lymph node, small intestine, or much less likely spleen given the findings on the additional obliqued ventrodorsal view. Other than neoplasia, additional differential diagnoses for this mass included a granuloma, cyst, or abscess (less likely). A retained testicle was considered unlikely based on the location, lack of apparent prostatomegaly on the radiographs, and neutered status of the dog.

A comprehensive abdominal ultrasonographic examination was performed, at which time the mass appeared as a rounded, heterogeneous mass with irregular margins that measured approximately 4.7 X 5.1 cm. The mass had a hypoechoic outer band with a more hyperechoic center with no central shadowing present. The mass was located in the right mid abdomen just cranial to the urinary bladder and caudal to the right kidney but did not appear associated with either organ. It was moderately vascular on color flow Doppler ultrasonographic examination. On the transverse view, the mass caused the ventral abdominal wall to bulge outwards, and the mass and abdominal wall tissues were contiguous (Figure 4). The mass was not associated with any other abdominal organs, and as the dog was positioned in various recumbencies (dorsal, oblique, and lateral), the mass consistently remained in the same fixed anatomic location. The mesentery and gastrointestinal tract glided past the mass independent of the recumbency. Based on these findings, a tumor associated with an abdominal organ was considered unlikely, and although a mesenteric mass (such as a gossypiboma) with adhesion formation could not be ruled out, it was also considered unlikely due to the lack of shadowing at the hyperechoic center, as would be expected with a foreign body, in addition to the dog having no previous history of abdominal surgery. An abdominal wall mass was considered most likely owing to the intimate association with the ventral abdominal wall, lack of association with any abdominal organs including the mesentery, and the unwavering nature in which the mass remained in an unchanged anatomic location, independent of patient positioning, whereas the other abdominal contents remained fluid. During ultrasonography, fine-needle aspirate samples of the mass were obtained and sent for cytologic evaluation.

Cytologic interpretation of the abdominal wall mass was consistent with a mesenchymal neoplasm (likely sarcoma), and surgery was performed 3 weeks later to remove the mass. The tumor was found to be infiltrating and likely originating from the body wall and was removed en bloc via wide excision. Concomitant exploratory laparotomy did not reveal any other abnormalities. Primary reconstruction of the body wall was then performed without complication. Histopathology of the body wall mass confirmed a completely excised grade 1 fibrosarcoma (FSA) originating from and contained to the rectus sheath with no evidence of invasion into the peritoneum or abdomen. The dog recovered without incident, and at the time of last follow-up 7 months after surgery, there was no evidence of local recurrence, and the dog was behaving normally at home. Based on the low likelihood of local recurrence and latent systemic metastasis, adjunctive treatment was not recommended.

The body wall FSA in this dog was an unrelated finding to the reason for initial presentation and was an incidental imaging finding during a routine metastatic screen for a previous neoplastic disease. Thorough abdominal palpation in this dog was hindered due to temperament, as this mass would have been expected to have been palpable upon complete physical examination. The silhouetting of the mass with the ventral abdominal wall and lack of association with the spleen in the obliqued view led to a high suspicion that this mass was associated with the mesentery or the body wall itself, but not with any abdominal organs.

The use of ultrasonography confirmed the close association with the body wall and allowed observation of the outward bulging of the ventral abdominal wall on the transverse view. The lack of association with any abdominal organs in addition to the fixed location of the mass in comparison with other fluid abdominal structures (mesentery and gastrointestinal tract) independent of positioning of the dog further confirmed an intra-abdominal body wall mass. Although a mesenteric mass, abscess, or granuloma could not be definitively ruled out, it became much less likely based on the combination of findings.

Fibrosarcomas fall under the broader category of soft tissue sarcomas and are malignant tumors that originate from connective tissue cells and can occur anywhere in the body.1 There have been many reports of the formation of intra-abdominal FSAs associated with retained surgical supplies (swabs, gauze etc.) reported in the literature; however, this is the first reported case of a primary FSA originating from and remaining contained to the rectus sheath in a canine subject, to the authors’ knowledge. Although FSA represent the second most prevalent skin tumors in cats and tend to arise from previous injection sites, they present as a rare tumor in dogs. What makes this case unique is that the tumor originated from the rectus sheath and grew inwards as opposed to the common presentation in dogs of a palpable tumor being present on the outside of the body, most commonly in the skin of the trunk or proximal limbs.2 Similar to FSA management elsewhere in the body, curative intent surgical excision led to local control of the tumor. Grade 1 FSAs are not likely to recur following excision, but recurrence is also related to completeness of surgical margins.3 Dogs tolerate aggressive resection of the body wall, and in this case primary reconstruction was feasible; however, preoperative preparations had been made to incorporate synthetic prolene mesh augmentation if necessary.

The radiographic findings in this dog led to high suspicion that this mass was originating from the mesentery or body wall, and it is our recommendation that when a soft tissue dense mass is seen in a location similar to this case, a body wall mass be prioritized on the differential list. Ancillary imaging is necessary for confirmation, with abdominal ultrasonography being the ideal first line modality due to its low cost, availability, and the ability in and of itself to provide a definitive diagnosis, as was the outcome in this case, of the anatomic location of origin. However, 3-D imaging (MRI and CT) should be pursued for surgical planning if ultrasonographic evaluation is unrewarding for a confirmatory diagnosis of the tissue of origin.4