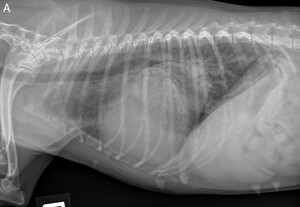 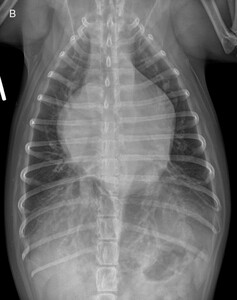 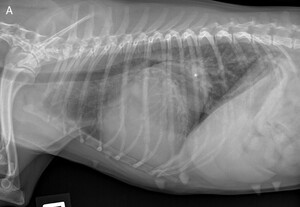 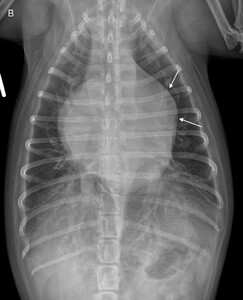 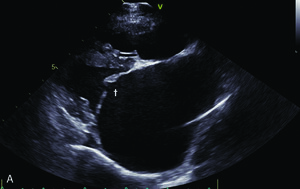 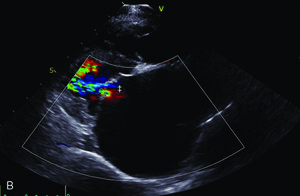 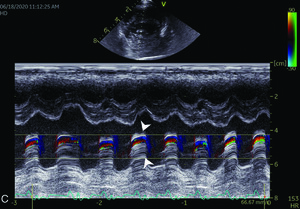 A 4-year-old spayed female spayed Boston Terrier was referred to the Louisiana State University Veterinary Teaching Hospital for evaluation of a heart murmur, respiratory distress, and lethargy. On physical examination, a VI/VI systolic right apical heart murmur, III/VI diastolic left apical heart murmur, and an intermittent arrhythmia were auscultated. Auscultation of lung sounds was obscured by the heart murmurs, and respiratory rate was moderately increased with mild effort. Femoral pulses were weak and synchronous with the heart sounds. Mucous membranes were pink with a capillary refill time of < 2 seconds. Thoracic radiography was performed (Figure 1).

Thoracic radiography revealed a severely enlarged cardiac silhouette with predominantly left-sided cardiomegaly (Figure 2). Straightening of the caudal cardiac silhouette with a large soft tissue convexity in the area of the left atrium, resulting in dorsal displacement of the intrathoracic trachea, was noted. On the dorsoventral view, there was a soft tissue bulge in the area of the left auricle and rounding in the region of the right ventricle. Furthermore, the pulmonary veins were mildly distended. A severe, generalized, interstitial pulmonary pattern that obscured the margins of the vasculature was noted in all lung lobes with bronchocentric pattern in the caudal lung lobes. A diagnosis of left-sided congestive heart failure (CHF) was made; differential diagnoses included mitral valve dysplasia, degenerative mitral valve disease, infective endocarditis, patent ductus arteriosus, ventricular septal defect, and subaortic stenosis.

Clinical signs of mitral valve stenosis are similar to those in older dogs with degenerative mitral valve disease: exercise intolerance, respiratory signs, and atrial arrhythmias. Mitral valve stenosis may cause a diastolic murmur at the left apex, where duration, not intensity, of the murmur may correlate with the degree of stenosis.3 This is consistent with a III/VI diastolic left apical murmur found in this dog. This patient also had a VI/VI systolic right apical murmur that may have obscured a systolic left apical murmur typically heard with mitral regurgitation.

Anatomic pathology of mitral valve stenosis shows the affected valvular leaflets were thickened, stiff, and nodular. The chordae tendineae may be thickened, short, and sometimes fused with hypertrophied papillary muscles.2 A subvalvular ring or hypoplastic valves may be present.4 Mitral valve stenosis is characterized by a failure of the leaflets to properly diverge, resulting in pressure overload of the left atrium. Diastolic mitral regurgitation may be secondary to some cases of mitral stenosis. Systolic mitral regurgitation, or leakage of blood from the left ventricle back into the left atrium due to poor connection between the mitral valve leaflets, can be caused by several pathological conditions. Myxomatous mitral valve degeneration (MMVD) is the most common cause of mitral regurgitation and secondary left atrial dilation in dogs and is characterized by stretching and thickening of the chordae tendineae and nodules on the thickened valvular leaflets. Mitral valvular bacterial endocarditis is extremely rare, but it is another acquired cause of left atrial dilation and is characterized by fibrin, a platelet or agglomerate forming vegetative lesions on the valves. Changes caused by endocarditis can vary from mild thickening of 1 or more valvular leaflets to a proliferating mass. The dog of the present report had thickened, dysplastic, and severely stenotic mitral valve leaflets. The valvular leaflets were tethered to dysplastic papillary muscles by thick and shortened chordae tendineae, similar to those seen in MMVD and endocarditis. This emphasizes the importance of echocardiography in revealing a stenotic mitral valve to distinguish between diseases that cause mitral valvular defects.

Diagnosis of mitral valve stenosis is not well described in veterinary medicine and is based on echocardiographic and catheterization findings associated with visualization of the valve apparatus structure and function, and demonstration of high-velocity diastolic regurgitation across the mitral valve. In most cases, survey thoracic radiography is an inaccurate method of diagnosing congenital heart defects in dogs, due to variation in thoracic conformation among patients, inconsistent positioning, variation of views from different phases of respiration, and lack of external cardiac changes that represent chamber enlargement.5 Survey radiography does not allow visualization of internal cardiac structures or assessment of function. The most consistent feature of mitral valve stenosis on thoracic radiography is severe enlargement of the left atrium. However, left atrial enlargement on thoracic radiography may occur in many conditions, and echocardiography is integral for the diagnosis of mitral valve stenosis. Pulmonary vein distension and evidence of left-sided CHF may also be present. Left ventricular size has been reported to be increased, normal, or decreased, so size is not considered as a component of mitral valve stenosis.3 Echocardiography is the most sensitive modality for diagnosing mitral valve stenosis. Two-dimensional echocardiography reveals malformation and narrowing of the mitral valve apparatus and dilation of the left atrium. Doming of the leaflets toward the left ventricle during diastole, incomplete diastolic separation of the mitral leaflets, and concordant diastolic motion of the septal and parietal mitral leaflets confirm mitral stenosis. Color flow Doppler echocardiography reveals high-velocity mitral inflows and diastolic mitral regurgitation, as described in this patient. Treatment most commonly consists of medically managing CHF. Patients with only mild to moderate malformations may do well for several years. With the severity of this case, the prognosis was poor and likely end stage. To our knowledge, only 1 case of successful surgical valve replacement or reconstruction with cardiopulmonary bypass specific to mitral valve stenosis has been reported4 and is therefore not well studied; nonetheless, open-heart surgery may be an option for some patients.4