Sagittal plane ultrasonographic images without (A) and with (B) color flow Doppler ultrasonography of the urinary bladder of an 11-year-old spayed female Australian Shepherd with a history of intermittent pollakiuria.

Same images as in Figure 1. A—There is a smoothly marginated, heterogeneously hypoechoic mural mass (white arrows) along the caudoventral mucosal margins of the urinary bladder, measuring 2.8 X 2.0 cm. The mass is involved with the mucosal layer of the urinary bladder. The remaining mucosal and serosal margins of urinary bladder are smooth and unremarkable. The regional mesentery is unremarkable. B—There is minimal color flow Doppler ultrasonographic signal associated with the mass. 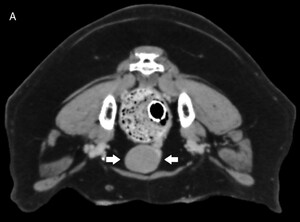 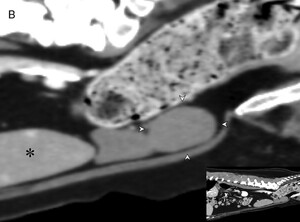 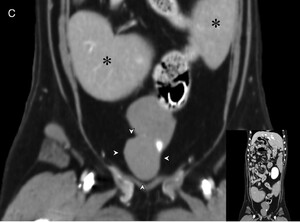 An 11-year-old spayed female Australian Shepherd was presented to an emergency service and specialty hospital because of recurrent pollakiuria. Two months earlier, the dog had been seen by its primary care veterinarian for pollakiuria, and despite negative results for urine bacterial culture, abnormal clinical signs temporarily resolved with antimicrobial treatment (amoxicillin-clavulanic acid, unknown dosage and duration).

On physical examination, the patient was bright and alert with normal vital signs. Findings for the urethra on transrectal palpation were unremarkable. Abdominal palpation did not elicit signs of discomfort, and no mass effect was detected.

Results of a CBC, serum biochemical analysis, and urinalysis revealed no azotemia and were overall within reference limits. During cystocentesis, an irregularity in the urinary bladder was noticed. As a result, a full abdominal ultrasonographic examination was performed (Figure 1). Thoracic radiography and abdominal radiography were also performed and were overall unremarkable.

Abdominal ultrasonography revealed a well-defined, smoothly marginated, heterogeneously hypoechoic mural mass (2.8 X 2.0 cm) with hyperechoic foci of the urinary bladder, with minimal color flow Doppler ultrasonographic signal obtained (Figure 2). The mass was involved with the mucosal layer of the urinary bladder, located along the caudoventral aspect of the wall at the level of the trigone. The remaining mucosal margins of urinary bladder were smooth and unremarkable. The serosal margins of the urinary bladder are smooth. The regional mesentery was unremarkable. This structure was determined to be a urinary bladder mass causing probable mechanical obstruction (partial vs unlikely complete). The differential diagnoses included neoplasia (eg, transitional cell carcinoma [TCC], leiomyoma, leiomyosarcoma, or rhabdomyosarcoma), polypoid cystitis (less likely, given the location of the mass), or cystitis (also unlikely given the smooth mucosal margination).

Ultrasound-guided fine-needle aspirate samples of the mass were obtained with a 22-gauge needle. Cytology of the mass revealed uniform smooth muscle, most consistent with a leiomyoma or well-differentiated leiomyosarcoma. Due to the unusual findings on cytology, abdominal CT was performed (Figure 3) for planning surgery, radiation therapy, or both.

An abdominal CT revealed a well-defined, ovoid, minimally contrast-enhancing soft tissue mural mass (approx 3.3 X 2 X 2.4 cm) in the caudal aspect of the urinary bladder wall. Ultrasound-guided biopsies of the mass were performed using a 16-gauge core biopsy needle (Tru-Cut Biopsy Device, Merit Medical Systems), with no immediate complications noted. In addition to the urinary bladder mass, there was amorphous mineral material in the lumen of the urinary bladder, consistent with sand-like cystic calculi. There was no lymphadenopathy noted. Incidentally, multiple well-defined contrast-enhancing nodules were found throughout the spleen, and there was amorphous mineral material in the gallbladder. The remaining abdominal findings were unremarkable. Histopathology of the mass revealed it to be a leiomyoma, consistent with the cytology identifying uniform smooth muscle.

A partial cystectomy was performed for mass removal. The mass was noted to be in the muscularis of the urinary bladder. To remove it, an incision was made through the serosal surface and the mass was shelled out easily while keeping the submucosa and mucosa intact. The entire mass was submitted for histopathology and was found to be a leiomyoma, resected with complete margins. Four months following the procedure, the patient was reported to have been continuing to do well with no further lower urinary tract signs.

This case was notable in the apparent rarity of the diagnosis of a urinary bladder leiomyoma and the diagnostics utilized. Leiomyoma and leiomyosarcomas make up about 5% of all urinary bladder neoplasms of dogs.1 These tumors lead to nonspecific lower urinary tract clinical signs, including urine dribbling, dysuria, hematuria, and pollakiuria, or may present asymptomatically.1,2

Differentiation of urinary bladder tumor type is important for treatment options and prognosis. Based on cytology alone it is impossible to differentiate a leiomyoma from well-differentiated leiomyosarcomas; thus, histopathology is indicated. Leiomyomas are nonmetastatic, and surgical excision can completely resolve disease.1 Leiomyosarcomas are more aggressive, more invasive, and have higher metastatic potential. It is especially important to differentiate smooth muscle tumors from urothelial carcinomas (UCs), more commonly known as TCCs, which are the most common urinary bladder tumor in dogs and are often nonsurgical.1,3,4 TCCs tend to track through the urinary bladder trigone, proximal urethra, and prostate, and they are highly metastatic to the prostate and regional lymph nodes, bones, and lungs.3,4 Incomplete surgical excision often leads to fast and aggressive recurrence.

Ultrasonographic results for the dog of the present report were indicative for a mass in the urinary bladder, with differential diagnoses including a leiomyoma, leiomyosarcoma, or a TCC; however, the mass in question was more indicative for a soft tissue tumor rather than a TCC. TCCs tend to be irregularly shaped and sessile. They are usually located at the trigone along the dorsal wall of the urinary bladder.2,5 TCCs often appear sonographically as single or multiple intraluminal mural wall masses with heterogeneous echogenicity and high vascularity. They tend to cause irregularly margined mucosal surfaces, primarily involving the mucosal layer with variable extension into the deeper layers of the urinary bladder wall, often with areas of mineralization. Another differential for a urinary bladder wall mass includes polypoid cystitis, which usually appears pedunculated along the mucosal margins of the urinary bladder.2,6 The mass in this patient had minimal color flow Doppler ultrasonographic signal obtained, which indicated low blood flow. The mass was rounded and smoothly marginated with broad areas of contact with the urinary bladder wall, which less likely represented TCC or polypoid cystitis and was instead more representative of urinary bladder leiomyoma or leiomyosarcoma.2

To our knowledge, no reports are available in the literature describing CT findings for urinary bladder leiomyoma or leiomyosarcoma. CT in this case was utilized to better evaluate the location and extent of this mass for surgical planning, as well as to potentially aid in radiation therapy planning had the mass not been fully resectable. On CT, the mass was minimally contrast enhancing, well-defined, ovoid, and located in the caudal aspect of the urinary bladder wall. CT was also used to rule out potential metastasis, which could suggest a more aggressive tumor type such as a leiomyosarcoma. The findings on CT were dissimilar with the usual appearance of a TCC, which tend to be contrast enhancing, irregularly marginated, and often have areas of mineralization. CT has been shown to better identify metastasis of urinary bladder tumors and can better evaluate the urinary bladder and the urethra than on ultrasonography alone.4 For the dog of the present report, CT was able to better define the margins, characteristics, and extent of the mass, evaluate the urethra and ureters, and rule out metastatic involvement.

Diagnosis of urinary bladder masses can be challenging. Concerns over “tumor seeding” with carcinomas may lead to hesitation in aspirating these masses.7 Other diagnostic options include cystoscopic sampling and DNA-based noninvasive molecular testing. Cystoscopy may acquire nondiagnostic samples as they can only obtain peripheral sections of a possibly friable mass and are preferentially performed in female patients.8 DNA-based testing for the mutation found in TCC is reportedly both sensitive and specific; however, it may have a slow turnaround for results and is only for the assessment of TCCs.5 In the current case, not only were fine-needle aspirates performed, but ultrasound-guided core needle biopsies were also performed for more definite diagnosis. Ultrasound-guided biopsy is superior to fine-needle aspiration as it can obtain better tissue architecture and higher cellularity and can be used for neoplasia grading. Additionally, excisional biopsy is superior to core biopsy in so far as a core sample only obtains a small area of regional architecture, which may differ across a mass. In the current case, a core needle biopsy was deemed safe due to minimal blood flow of the mass noted on both ultrasound (minimal color flow Doppler ultrasonographic signal obtained) and CT (minimally contrast enhancing). Histologic results for the biopsy sample confirmed the diagnosis of a leiomyoma and led to the definitive decision to remove the mass surgically.

Findings for the dog of the present report were representative of an uncommon urinary bladder tumor in dogs. The mucosal surface margins, location, vascularity, extension, and potential metastasis of masses are all important components to consider when evaluating urinary bladder masses with ultrasonography and CT. Clinicians should be cognizant of the possibility of urinary bladder tumors other than TCCs and the associated diagnostics and treatments that may be utilized in their management.